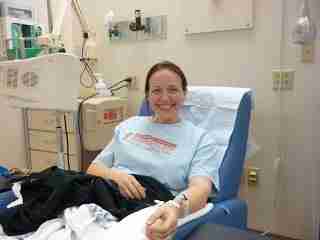 As I sat in Pod 3, waiting for my 6th round of intravenous iron, a commercial popped up on the television.  It was Carnie Wilson promoting her new Wilson Phillips reality show.  She was talking to one of the Wilson’s or Phillip’s (I can never remember who is which) about having weight loss surgery for a second time.  The nurse assisting a patient receiving chemotherapy next to me made the comment  “She is getting that surgery again?  Well, it sure doesn’t seem like it worked for her the first time.”  She continued to talk about it as she walked over to insert my IV, “Do you think it will work out for her this time?”  I reply, “Maybe, pretty brave of her though.”  I guess that response was unexpected… she says, “Oh?”  I know, I opened myself up for this but her condescending tone on a subject she seemed to know so little about bothered me.  “Well, if I would have known then, what I know now… I might not have been brave enough to go through weight loss surgery the first time, much less a second time. (a quiet pause)  It is why I am sitting here today, after all.”  Ironic.

For those of you who are not familiar with my weight loss journey, you can see some before and after photos and read more about it here.  It’s been almost 10 years since I had gastric bypass surgery.  I had a Roux-en-Y gastric bypass.  This entailed the cutting of my stomach to make a smaller stomach pouch about the size of an egg.  The new smaller pouch was then directly attached to the middle part of my intestines, “bypassing” the larger portion of my stomach and upper part of my intestines.  This is done to decrease the amount of food one can take in and also to decrease the amount of sugars and fat that can be absorbed into the body.  I know this seems drastic but this is usually done on severely obese patients that are on the road to an early grave. I believe I was.  I believe it saved my life.  But with any surgery and manipulation of the body comes complications.

The first complication began immediately after the surgery.   For some reason, I was vomiting everything I ingested… even water.  Doctors had never seen such a case.  Of course, I had to be one of those “weird cases.”  Story of my life.  After an additional week in the hospital and extensive tests, doctors concluded I had a “swelling in the portion of the stomach that led to the intestines.”  This swelling caused a blockage.  The swelling finally subsided and everything was “good”… for awhile.

It wasn’t until about 4 or 5 years later when more complications arose. I began having excruciating pain in the upper part of my abdomen.  The pain was debilitating.  I often could not catch my breath and wondered if  “this is it, I’m coming Elizabeth.” (Props to whoever got the Sanford and Son reference, I know my hubby did) This led me to a Gastroenterologist.  Turns out, with having a much smaller stomach pouch, one is more at risk to develop stomach ulcers.  I did. Good news is… they can be prevented by taking Nexium, the little purple pill.  Bad news is… I have to take it daily for the rest of my life.  And believe me taking it daily is crucial for warding off the ulcers.  There have been times when I had forgotten to take my pills or ran out without reordering them in sufficient time… I paid the price.  So, if this is what I have to do… so be it.  Things can always be worse.

Things seemed to be stable again… for while.

I look back now and see there were many of signs of anemia.  Fatigue, dizziness, being cold ALL THE TIME, rapid heartbeat, shortness of breath… but it wasn’t until I started getting illness after illness when my doctor suspected something was off.  After having pink eye and strep throat twice… doctors ran blood test suspecting I had mononucleosis.  Mono test came back negative.  But my blood and iron counts were extremely low.  Apparently, my iron levels were under a 4.  Apparently, individuals with iron levels under a 4 are usually passed out.  Apparently, the multivitamin and iron supplement I take daily was not being absorbed.  I was sent to a Hematologist.

The Hematologist gave me two options, an iron infusion or an iron infusion.  I was given the choice between two forms of iron I would had administered.  The first is called “Infed.”  It is administered over a period of 6 hours, this is because a “test dose” is first administered… what are they testing for?  Allergic reactions. The allergic side effects from this form of iron is very common and cases of death have even been reported.  “I will take what is behind curtain number two… Zonk!” (Who guessed Let’s Make a Deal?)  The second option was a 2 hour treatment of a form of iron called “Venofer.”  These treatments are done three times over a three week period.  The good news is… patients being administered Venofer have a much lower risk of developing an allergic reaction.  The bad news is… I developed an allergic reaction.

It wasn’t until about 4 hours after receiving the Venofer when I started to get a head ache and just feel “blah.”  Then… the fever hit and chills.  I was under a heating blanket and shivering.  I started to have pain in the arm I received my infusion and it started to swell.  I first thought this might be normal but after suffering for an hour or so, I did what I usually do when I am feeling bad.  I called my mommy.  She is a nurse so she does have some insight on the situation.  She thought I was having an allergic reaction and gave me prompt orders to take some Benedryl.  I did.  Sure enough… about 30 minutes later, I started to feel better.

I called my Hematologist first thing Monday morning.  I was scheduled for my second round of iron on Friday and I did NOT want to go through that again.  She ordered a steroid to be administered before and after each iron treatment.  This seemed to do the trick.  My next two treatments ran smoothly.  I was feeling much better, I had so much more energy… I was cured!

A month later I had a follow up appointment to check my blood count and iron levels.  It was not up to the level it should have been.  I had to schedule another round of iron infusions.  Another three weeks of infusions.  I was also told that this will now be my “norm.”  I am to come in periodically to have my levels checked.  If they are too low, I am to have iron infusions.  My body does not absorb iron like it should due to having gastric bypass surgery.  I guess… I had not thought of it this way before.  I was disheartened.  And on top of that, since I am still menstruating, I have to watch it even more closely due to losing blood/iron every month.  This led to the discussion about having an Endometrial ablation…

An Endometrial ablation is a procedure that destroys the uterine lining.   Basically, a patient is under anesthetic and boiling water is inserted into the uterus to destroy the lining.  The endometrium heals by scarring, which usually reduces or prevents uterine bleeding.  Thus, reducing my loss of blood/iron every month.  I am scheduled for a uterine biopsy on Monday.  Hopefully, I am a good candidate for the procedure.

I also just completed my 2nd round (6th treatment) of receiving Venofer.  All went smoothly once again with the help of the steroid.  I HOPE I do not have to get another round of iron any time soon.  I will just have to wait and see what my counts are in a month or so.

But as I sat there receiving my last treatment.  I glanced around the room called “Pod 3.”  Next to me stood the “Carnie Wilson nurse” assisting a patient, another woman (which seemed to be in her early 40’s) surrounded by worried family members and a few other patients lying in hospital beds.  All were receiving chemotherapy treatment.  All were fighters.  All were brave.  And the only thing I could think about was… how blessed I am for my health.