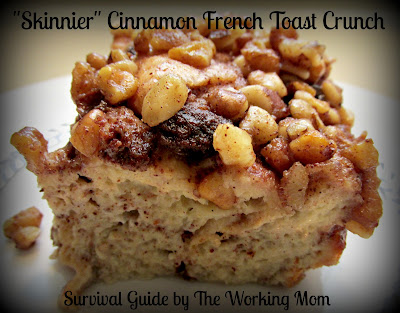 I am a huge fan of casseroles!  As a full time working mom, I like that I am able to prepare a meal beforehand and let it sit in the refrigerator until its time to throw it in the oven.  Or the fact that I can have the meal all made up and baking in the oven while I clean up the mess.  Oh, the joys of casseroles!
Breakfast casseroles are my favorite.  I recently ran across a couple of “French Toast Casserole” recipes but was afraid to try them because of the HIGH fat and caloric content with the highest portion of the fat coming from the amount of butter.  So I went to work on what I do best, taking a “fattier meal” and skinnying it up!
To skinny up this recipe the first thing I had to do was change the butter, so I turned to Country Crock Spreads!  Country Crock is a favorite of mine because it contains 75% less fat than butter, has 0g trans fat, no cholesterol and tastes awesome!  Country Crock also appreciates the magic of casseroles, that is why they are holding a Country Crock Stars Contest!  To enter for a chance to win $5000 and a trip for two to New York City, simply share a photo of you and your favorite casserole with a 100 word essay on how you demonstrate creativity and resourcefulness in the kitchen.
“Skinnier” Cinnamon French Toast Crunch Casserole

Ingredients
Base:
1 loaf French bread (use wheat for the added Fiber)
9 egg whites (large eggs)
2 cups almond milk
1/2 cup raisins
1 Tbs ground cinnamon
1 tsp vanilla extract
Topping:
1 cup chopped walnuts
1/4 cup brown sugar
1 tsp cinnamon
3 TBS Country Crock Spread (melted)
1 egg white
Directions
1.  Whisk the egg whites, milk, cinnamon and vanilla extract in small bowl and set aside.
2. Slice french bread into 1 inch cubes and place in a non stick sprayed baking dish.  I used a 9×9 sized dish but this would also work in a 9X13.
3.  Pour egg/milk mixture over the bread covering it completely.  Press down the bread using a fork to soak up all of the egg mixture and sprinkle raisins over the top.  Cover and place in refrigerator overnight.
4.  Preheat oven to 350 degrees and mix topping.
5.  Spread topping evenly over the top and cook for 45-60 minutes.

I was selected for this opportunity as a member of Clever Girls Collective, and the content and opinions expressed here are all my own.

Wow this sounds amazing, I will have to give it a try!

Thanks for posting this skinnier version of a typical French Toast Casserole! I, too, have struggled with my weight throughout my entire adult life & as of 1 1/2 years ago, I lost 75 lbs & reached my goal weight & am managing to maintain. I'm always looking for new recipes that fit into my healthier eating lifestyle, so thank you - and congrats on your weight loss as well! :)

This skinny recipe looks amazing.I love the look of it when it's baked and I love anything with cinnamon in it.I think this will be a hit in our house.Thanks for sharing.