Many of us think of Memorial Day and instantly think “three day weekend!”  We think of Memorial Day and we think of barbecues, pool time and family/friend get togethers.  But before we fire up that grill and put on our bathing suits, we need to remember exactly what Memorial Day means.  It was first known as “Decoration Day”, the day flowers were placed on the graves of fallen soldiers in remembrance of those who have served in United States Armed Forced and upheld our freedom.  And as that day approaches, here are some inspirational quotes. I’ve put together this awesome list of Memorial Day quotes to share and honor those who gave up their lives for our freedom.
You can also check out these Memorial Day memes to celebrate the day! 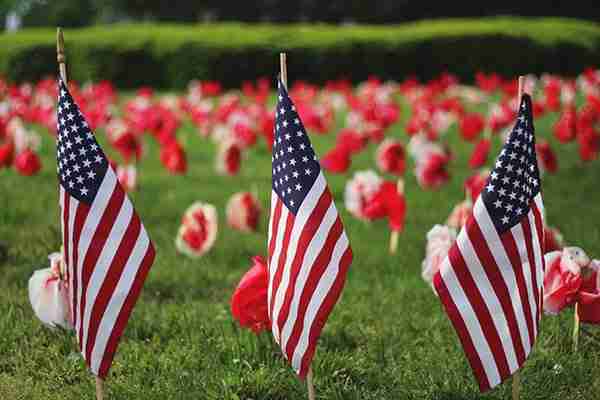 “How important it is to honor our heroes and she-roes”
-Maya Angelou
“There is nothing wrong with America that cannot be cured with what is right in America.”
-Bill Clinton
“It doesn’t take a hero to order men into battle.  It takes a hero to be one of those men who goes into battle.”
-Norman Schwarzkopf Jr.
“Patriotism is supporting your country all the time, and your government when it deserves it.”
-Mark Twain
“Our nation owes a debt to its fallen heroes that we can never fully repay, but we can honor their sacrifice.”
-Barack Obama
“It is foolish and wrong to mourn the men who died.  Rather we should thank God that such men lived.”
-George S. Patton
“I don’t have to tell you how fragile this precious gift of freedom is.  Every time we hear, watch or read the news, we are reminded that liberty is a rare commodity in this world.”
-Ronald Reagan
“In the truest sense, freedom cannot be bestowed; it must be achieved.”
-Franklin D. Roosevelt
“My fellow Americans, ask not what your country can do for you, ask what you can do for your country.”
-John F. Kennedy
“I only regret that I have but one life to lose for my country.”
-Nathan Hale
Share
Tweet
Pin5
5 Shares
Guide For Geek Moms