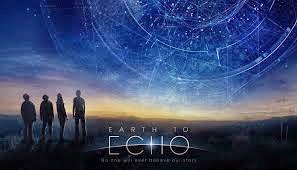 When I first saw the trailers for Earth to Echo, my first thought was this is a modern day E.T. movie.  Four friends, Alex(Teo Halm), Tuck (Astro), Munch (Reese Hartwig), who live nearby and basically have grown up together are being forced to move because of a highway being built right through their subdivision.  Strange things have been happening with their cell phones and on their last night together, they go out searching for the cause of this strangeness.  These kids are no ordinary kids, they come with some high tech knowledge and are armed the entire time with rigged cell phones and video cameras.  In fact, Tuck is the videographer throughout the movie and if I would have had any objection it would be to that.  The camera was shaky and wobbly the entire time and my motion sickness started to get to me.  I had to close my eyes a few times throughout the movie.  So, if you are prone to motion sickness you might want to take a Dramamine before watching it.
I would suggest bringing the kids to see this film, mine certainly enjoyed it.  There were many parts when my son (age 8) and other kids in the audience laughed out loud!  Echo, the little alien they are trying to save, was so cute and you just rooted for him the entire time.  My daughter (age 6) has been really into him after seeing the film.  After seeing it, she came home and has drawn picture after pictures of Echo.  The acting was also really good and the plot seemed to keep the interested of the kids throughout the movie.  At the end, the audience full of children even applauded!
Share
Tweet
Pin
0 Shares
Guide For Geek Moms