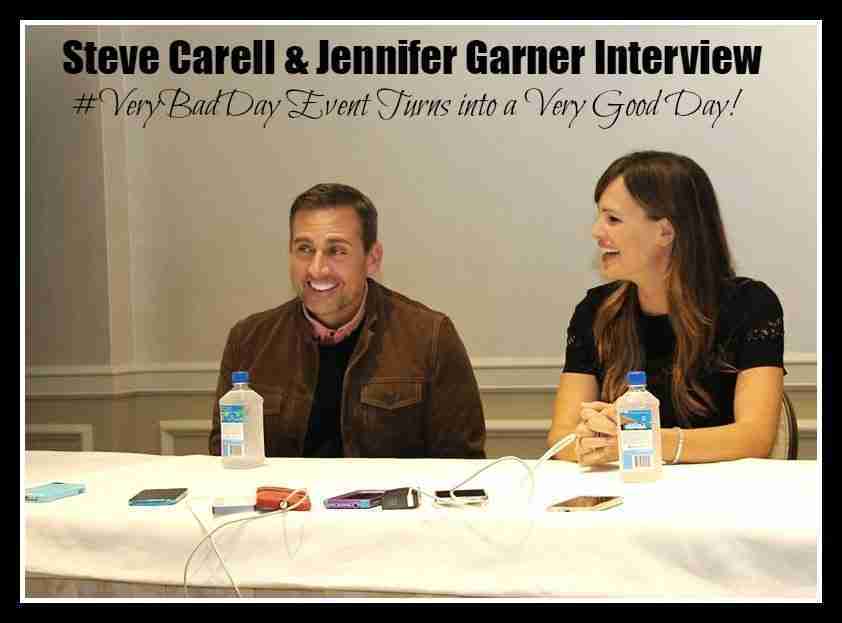 When I first heard I was invited to attend a pre-screening of Alexander and The Terrible, Horrible, No Good, Very Bad Day, which opens theaters nationwide October 10th, I was thrilled!  The movie looked like such a fun, family film; I knew I would enjoy it.  When I was told I would also have the opportunity to interview the actors of the film, which include Steve Carell and Jennifer Garner, I am not going to lie; I was a bit nervous.  Wouldn’t you be?  It was Steve Carell and Jennifer Garner, they are MEGA stars!  I totally had to bring my A game to the interview, so the pressure was on.

My worries were instantly squashed the moment they walked into the room, a room full of Mom bloggers, and Jennifer declared “These are my people! I brought him (Steve) along but let’s chat.“

And this laid back and down to Earth attitude carried on throughout the entire interview.  You could tell in the film they had great chemistry together but what surprised me was how well they played off each other off camera.  They laughed, made jokes and at times finished each others thoughts.  Here are some parts of the interview that shows you exactly what I am talking about.

Question: So, how did you both get involved with the project?

Steve Carell: I was asked to be in it, and I said yes.  I liked the script, I thought it was funny, and inventive, and different.  I feel like I hadn’t really seen this kind of family movie in a while.  And the fact that Jen was going to do it was a huge draw for me, because I’d been a huge fan of hers for a long time.   It’s true.  We met a few times over the years, but just sort of in passing, and you know when someone not only lives up to, but exceeds expectations, of everything you’ve heard about them?  That was her.  She’s just — she was —

Jennifer Garner: Well, he’s fibbing a little bit, because he was actually on it, on this movie first, so I was the one who knew he was doing it and said “Oh, yeah, I’ve been dying to work with him forever.”

Steve Carell: I continued to do it because {gesturing toward Jennifer}

Jennifer Garner:[LAUGHTER] We had a really good time. 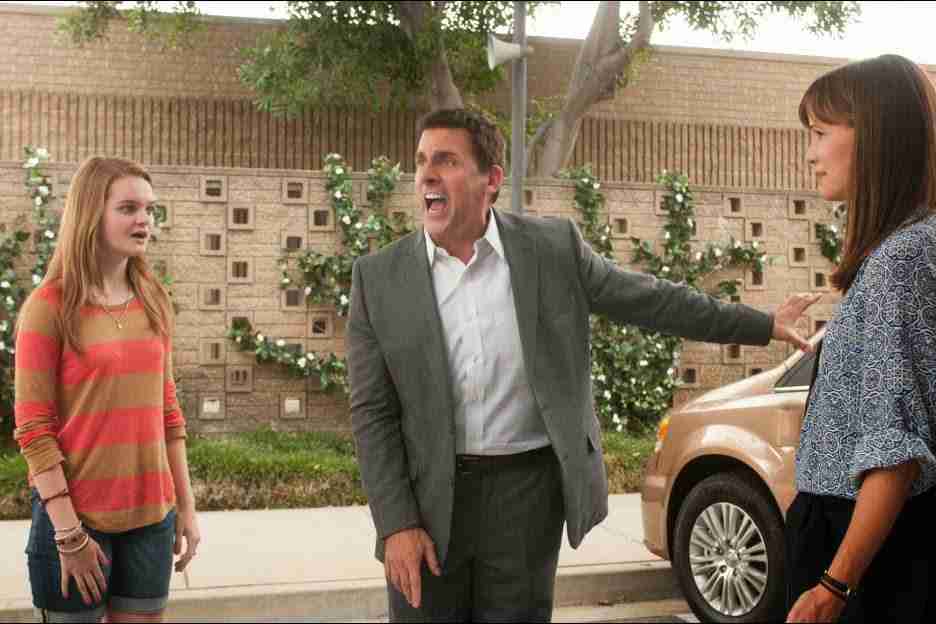 Question: Okay, so, I asked fans, and one of the burning questions they wanted to know was: Were there any days on set that were really bad days, just like in the film?

Steve Carell: There was one that we kind of point to.  There was a  scene where we were outside, around the car, talking after the big accident and after the driving test.  And it must have been 105 or something.  And so that was probably the most arduous day, physically.

Jennifer Garner: You know, I think it was tough because the baby got upset.

Jennifer Garner: You know what that does, I mean, that practically made me lactate.  It’s like, “Whaa –!”  And there’s nothing you can do.

Steve Carell: You know what?  We can set her off just by going “Wahh!”

Question: How many shrimp did you have to catch?

Jennifer Garner: He caught the shrimp.  I mean, they were saying “We’ll CG” and Steve said, “I’ll give it a go.”  He did it.  We were very excited.

Steve Carell: I didn’t know that I had that eye-shrimp coordination.

Question: Steve, Lisa (Producer Lisa Henson) told us you did the fire scene yourself, so I just wanted to hear about that —

Jennifer Garner: So exciting.
Steve Carell: Jen was like, petrified.
Jennifer Garner: I was so nervous.  Even though I had been set on fire before, you know what it’s gonna be, but it was so nervous to watch.
Steve Carell: Very protective.
Jennifer Garner: I didn’t want the kids to see him be set on fire, like, our movie kids.  It was very, very tough on me.  Um, but they put gel on you.
Steve Carell: It really wasn’t scary.  I hope it looks scarier than it is.
Jennifer Garner: Steve, you got very, very unfunny.
Steve Carell: I got focused.  I got focused.
Jennifer Garner: You got unfunny and very focused.  You couldn’t say that you were not aware that you were on fire.
Steve Carell: I was aware that I was on fire, and I prepared to be on fire.
Jennifer Garner: Mm-hmm.
Steve Carell: And with the stunt coordinator, we prepared to light me on fire, but —
Jennifer Garner: Mm-hmm, and then you were on fire.
Steve Carell: And then I was on fire.  And it’s the type of thing you don’t want to do a lot.  You don’t want to do 25 takes of the Steve on Fire scene.  So, you just try to get it right that first time, so you can move on.
Question: What was your favorite scene to film?
Steve Carell: What was my favorite scene to film?  Um.  Boy.
Jennifer Garner: I liked when we were all together.
Steve Carell: That’s what I was gonna say.  Well, we were all together for most of the movie.
Jennifer Garner:    A lot.  Dancing at the end.  It’s just, all of the fun stuff, is really, it’s fun, it looks fun, and it is, and there was, there was a day between scenes where they were setting up the cameras, and it was the kind of thing where you would typically go back to your trailers, and do whatever you needed to do.  Instead, they just put us in a little room in the house, and we all had our phones with us.  And we sat with those kids, and nobody ever looked at their phones, we just talked.  You wouldn’t think that you would have that much to talk about with teenagers, you know, because it seems like they’re from another planet.  But these are the coolest group of the smartest, most interesting, engaging kids.  And the five of us just hung out together, and had the best time, and that, to me, is kind of the crux of this whole movie, was just that feeling in that room, and that nobody came in and bugged us.  Nobody else was there.  It was just us as a group.  And it was something that we chose to do. 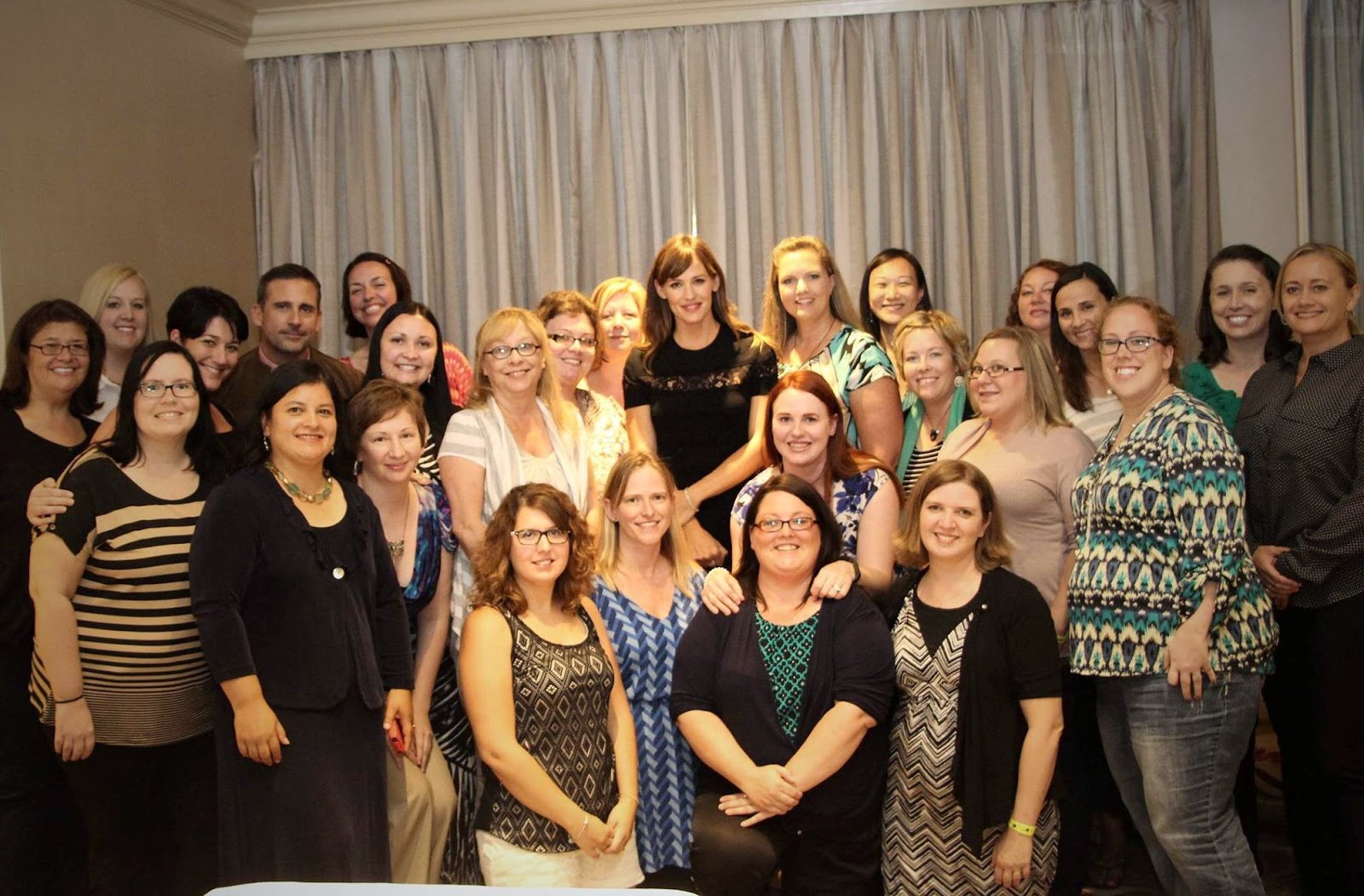 There you have it, two amazing people that are in one amazing film.  Like I said, these two are so nice and down to Earth, you would have never known you were talking to movies stars!  At the end of the interview, we all stood for a group picture.  I, being one of the tallest, immediately went to the back of the group.  I look over to my right and there was Steve Carell standing next to me in the back row.  I asked if he wanted to move closer to the center and he responds, “Nah, I am fine right here.”   I didn’t complain because, Hellooooo, I was standing right next to Steve Carell!  But that sort of attitude just goes to show you what a humble and awesome person he is.  They both are!

Check out more about the film by visiting Alexander’s Facebook Page.

I envy you!! I've been a fan of JG since the first time I saw her on Alias and I would really really want to meet or at least see her in person. How does she look like? You ha a great interview here, btw.

Thanks Angela! It truly was an amazing experience! Lots more posts coming up on the entire event. Glad you enjoy it!! :)

Angela @ Honey, I Shrunk the Mom

You have had some of the most awesome opportunities! Yay for you! :) I love following along. :)