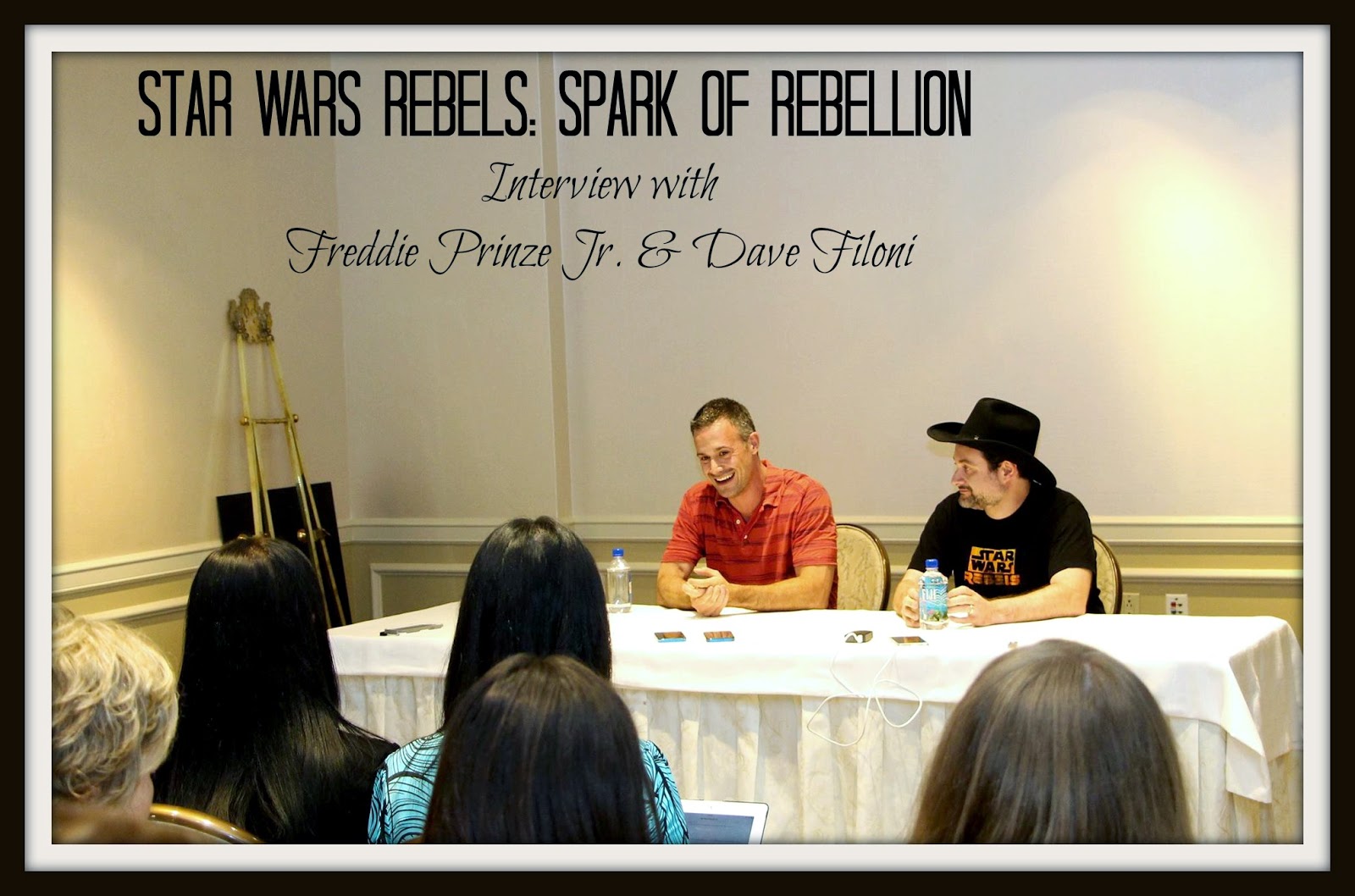 During my LA trip last week, I had the opportunity to watch a sneak peek of the new Star Wars Rebels: Spark of Rebellion movie which premieres tonight (October 3rd) at 9PM ET on the Disney Channel and the series will begin October 13 at 9PM ET on Disney XD.  Let me first put this out there, while I have enjoyed the Star Wars movies, I am not what you would call a “fan.”   Don’t get me wrong, I totally loved me some Harrison Ford as Hans Solo, R2D2 and those cute Wookies.  However, Star Wars fans (in my book anyways) are dedicated, hardcore fans.  They know the characters names, they know the actors that played those characters, they watched every movie a gazillion times and have kept up on all the Star Wars series.  Yup, that is not me.  Sure, I would like to be that devoted but I certainly don’t have that kind of Star Wars dedication.

Walking into the theater to view the premiere was very exciting, it felt very Hollywood and I totally enjoyed seeing all the super fans dressed in costumes to view the new series.   However, there was a voice in the back of my mind questioning myself.  Would I really enjoy it?  Sure, I loved the movies but an “animated” version of Star Wars?  I knew it had been done before, in fact my husband and son loved the Star Wars Clone Wars series but I just never “found the time” to watch it with them.  I told you, I’m so not that hardcore fan.  So, going into this sneak peek, I just wasn’t sure.

Fast forward about an hour and a half after the final credits rolled, I was on the phone with my husband raving about it!  In fact, I was calling to make sure he set the Tivo to record it premiere night.  Yes, the series is that good!  I instantly became a fan of the new series, I even developed an animation crush on the lead character Kanan Jarrus voiced by Freddie Prinze Jr. 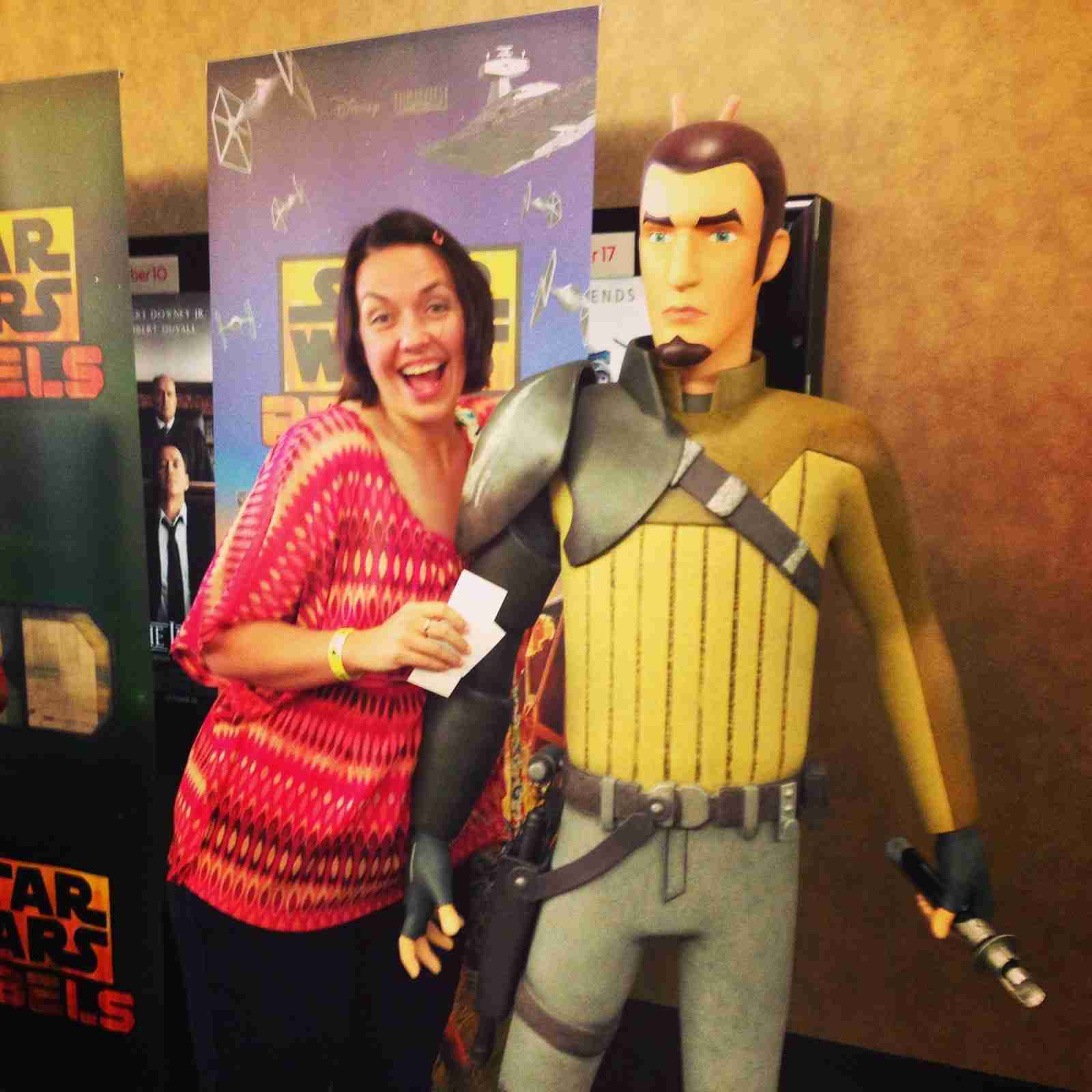 He is totally not your typical Jedi, in fact Freddie Prinze Jr. even commented about his uniqueness during the interview. “Cause he’s not the normal Jedi.  He’s not together.  He doesn’t have it all figured out.  He has maybe 3 answers.  Forget all the answers and then two of them, he’s guessing on.  You’ll literally see him sort of BS Ezra on some of these horse things that something like Master Yoda would be like, you know, there is no try, there’s only do.  Where’s Kanana will be like give it your best shot.  You’re not supposed to do that.  He makes mistakes cause he was young and he didn’t get to complete his training in the way that an Anakin or the way that Luke could, you know what I mean?“ 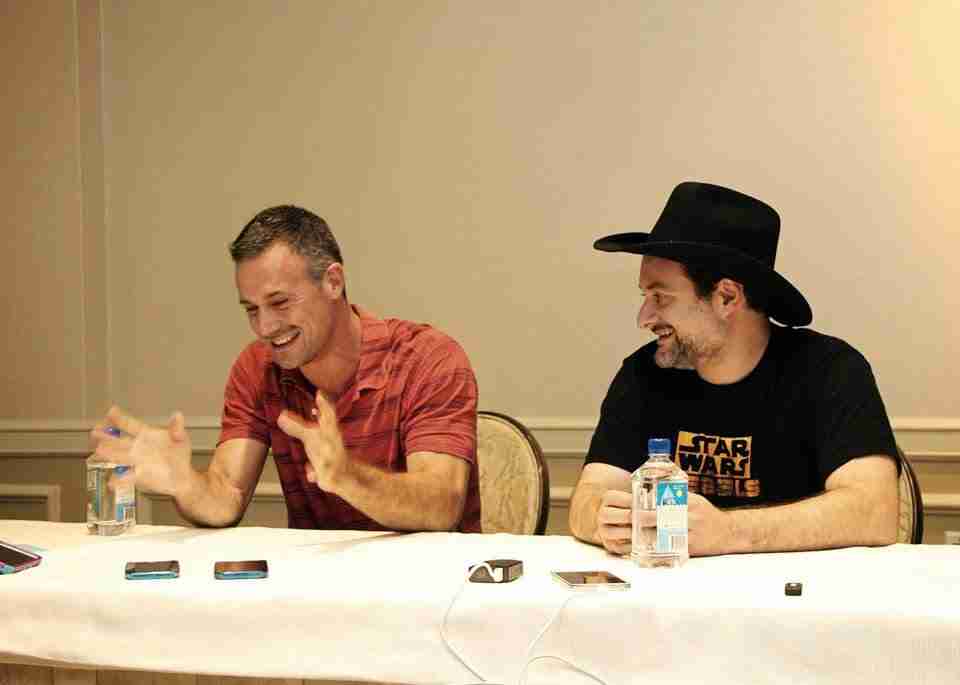 Oh yeah I forgot to mention, after the sneak peek, I and 24 other mom bloggers interviewed Freddie Prinze Jr. (voice of Kanan Jarrus) and Dave Filoni (Executive Producer of Star Wars Rebels).  Before watching the sneak peek, I really didn’t have any interview questions ready to go.  I figured I would watch the series and it would just come to me.  And it did, sort of.
As I exited the theater and I looked around at all of the Star Wars super fans, I began to feel very blessed.  I bet most of these fans would do anything for the chance to interview Freddie and Dave.  I wanted to get to know them, I ended up in conversation with a group of guys (all decked out in Star Wars attire) and I asked them, “If you could ask the stars from the series anything, what would it be?”  They had a question right away, “Star Wars is such a legacy, a huge franchise.  What did it feel like to be a part of that?“
As I sat down later that day with Freddie Prize Jr. and Dave Filnoli, I made sure the first question asked was in honor of that super fan I met.  And here is Freddie’s  response and some other fun parts of the interview:
“Freddie Prinze: I didn’t know it was Star Wars.  It was titled Wolf Pack.  But I went in and I saw some Character breakdowns on the wall at Disney and I looked at them and I’m thinking, these guys are either ripping off Star Wars real bad or this is a Star Wars thing.  And there was another girl in the Waiting Room and she was reading for Tia’s Character and she looked super nervous.  And when she came out of the room, I was like this is definitely Star Wars.  So I asked them and I think I said a word that I shouldn’t say at this first Table run.  I said is this bleeping Star Wars?  And then he kind of sits back and he kind of like nods his head all cool and I was like All right, give me a second.  I’ve got to turn around and compose myself and then get prepared.
Question: What made you want to do this?
Dave Filoni: Well, we were kind of wrapping up the Series, Clone Wars with the big Disney purchase, you know, it was time for a change and Fans felt very strongly about the Show.  It didn’t air so long, so many years but in all honesty, it just felt like something that we probably shouldn’t continue without George. So we wanted to come up with something new that represented this kind of new era of Star Wars and working with, Lucas Films Story team, we all quickly came up with the idea of Star Wars Rebels, carried back, the Story Team introduced the idea to make an A-Team like scenario and It just makes sense.
Question: Do you have a real Light Sabre?
Freddie Prinze: A real Light Sabre?  When do I get my real Light Saber?
Dave Filoni: No, you’re not ready for that.“ 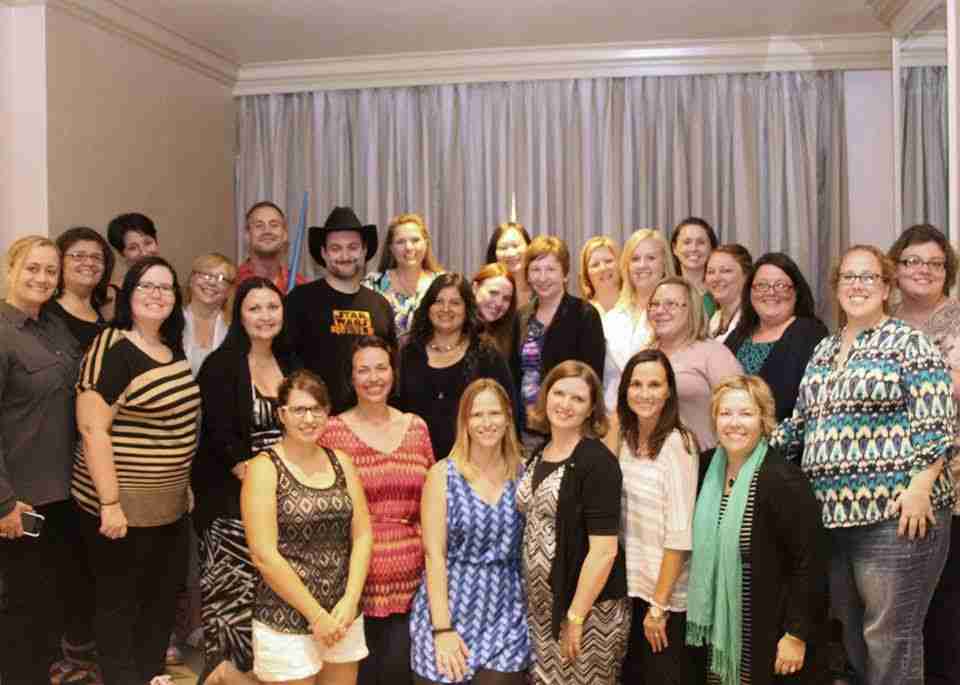 After the interview, the stars were kind enough to take a photo with us.  After braving this group of Mom bloggers, we thought Freddie totally deserved his Light Sabre, a plastic one anyways!

It was a very fun day indeed and the cast of Star Wars Rebels are not only very talented but extremely nice.  The Force would be proud!

Don’t forget to catch the premiere tonight at 9PM ET on the Disney Channel and the series begins October 13th at 9PM ET on Disney XD.