Did you watch the Star Wars Rebels series which premiered on Disney XD last week?  It’s awesome and if you enjoy any of the Star Wars movies/series then I suggest checking it out.  Episode 2 airs tonight at 9PM EST and the Star Wars Rebels movie is available to purchase on DVD.  I know what my little boy is getting from Santa this year!
Last month on my press trip to LA, I watched the sneak peek of the series and had the chance to interview Steve Blum (voice of Zeb) and Taylor Gray (voice of Ezra).  They are really an interesting duo on and off the screen.  In the series, Zeb and Ezra seem to have a “strained” relationship and Zeb continually makes cracks about “ending him.”  This was even reinforced when Zeb chose to give Ezra up to the Imperials, however, it was clear that Zeb regretted this decision immensely.  Although they later rescued Ezra and Zeb went back to his joking ways, Ezra does not seem to forgive him so easily.
In person, you would have never known these two had any type of friction on screen.  In fact, off screen they were full of hugs!  In the interview, Steve talks about the moment Zeb left Ezra behind:
“And for me actually not taking care of him and letting him go, that was a really hard thing for me to play as a dad.  It was really hard for me to just say see, you’re on your own, and leaving him with the empire.  I mean, that was terrible, but thank God we resolved that.  [LAUGHING.]  I can sleep now.“ 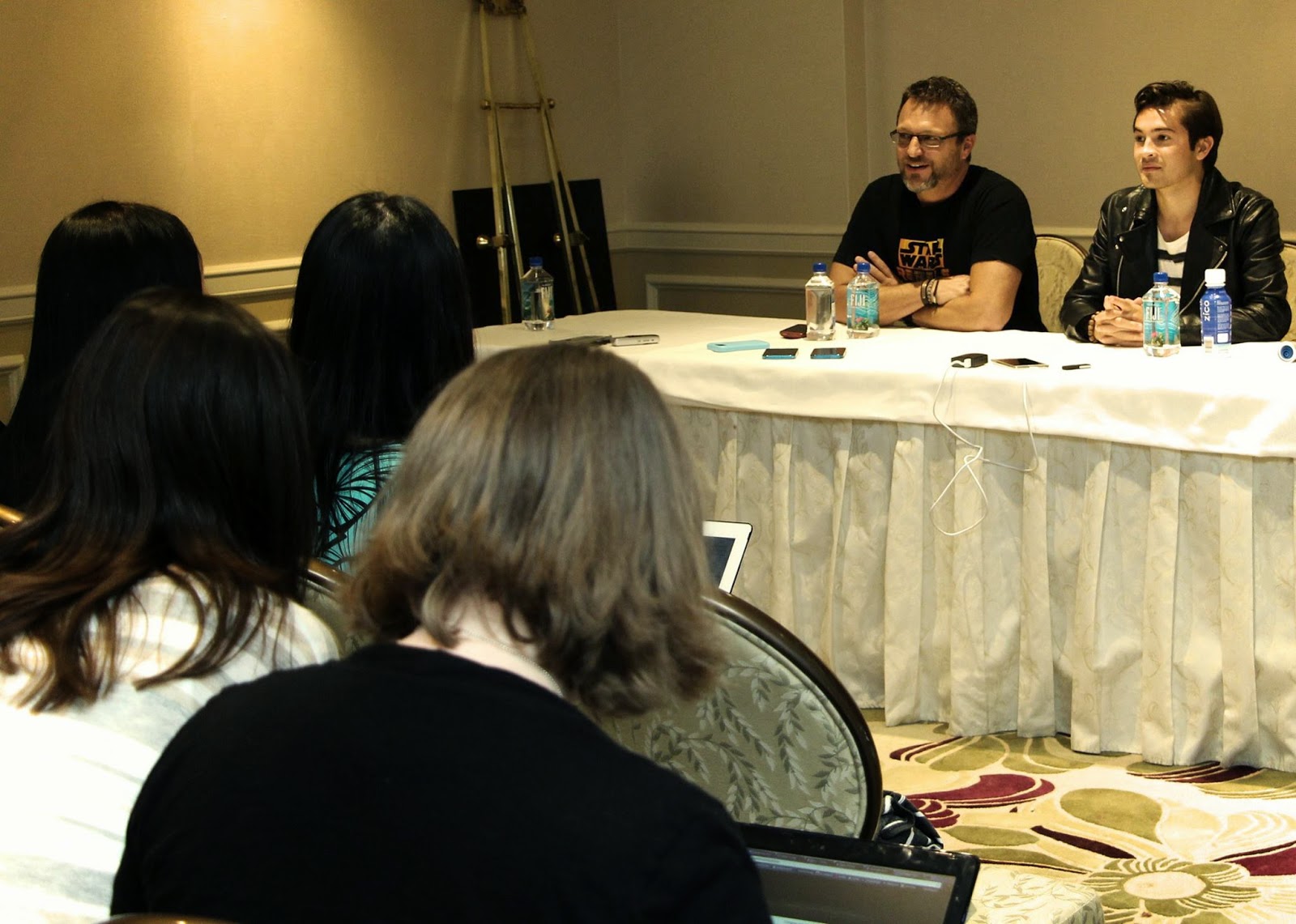 Steve & Taylor Talk About Embracing Star Wars Fans
“Taylor Gray: I think it’s awesome.  I had no clue, the first little taste of it we got was they sent us this thing called Star Wars Weekends in Florida.  And I had no idea what to expect.  I was like oh, it will be fun to like hang out with a couple people who like Star Wars and go on some rides.  There were like 60 thousand people who all had Star Wars shirts or full on costumes, wardrobe, outfits, everything and light sabers.  And just seeing that, I realized oh, wow, we’re in something much bigger than I thought.
Steve Blum: Yeah, I’ve been doing the convention circuit for the last 10 years for my other work and going to that weekend in particular seemed, you know, there was 20, 30 thousand people on the parade route, and they put us in convertibles and we’re waited on.  It’s great, and I’m thinking the show hasn’t come out.  Nobody’s gonna know who we are, and they’re chanting our names.  It’s my name.  This guy had researched and knew everything that we did and people were bringing stuff up to me from my whole career.  It was, in was amazing, and seeing the families, too. There was this one family where there was a grandma in a wheelchair in her 90’s, and the way down to like a 2-year-old, and there are like 50 of them and they’re all together cheering for us as we’re coming out of the parade route.”
Steve’s Favorite Scene
“I love all of it for so many different reasons.  I think one of my very favorite scenes that I’ve seen so far was Ezra’s realization that he was doing something of value.  After our first initial struggle, and then stealing stuff, and he’s sitting there and we’re giving away food, and that was the whole purpose of our mission.  And we’re risking our lives to do that.  And to see that look of, realization on his face where he’s just going, well, I didn’t do anything.  It’s like he didn’t deserve the praise and you see a little bit of a transformation in him.  That was a very powerful moment for me.”
Taylor’s Favorite Character
“Anakin.  He was young.  He was the hero and he was my favorite character, but Darth Sidious, that’s a much cooler character.  We met Ray Park when we went out to the weekends and he was Darth Maul.  I thought he was awesome, ’cause I hadn’t seen all those shows, so that is another character that I think is so cool.  I hope that kids like the characters from this show as well.  And I think it will be a lot of fun.“ 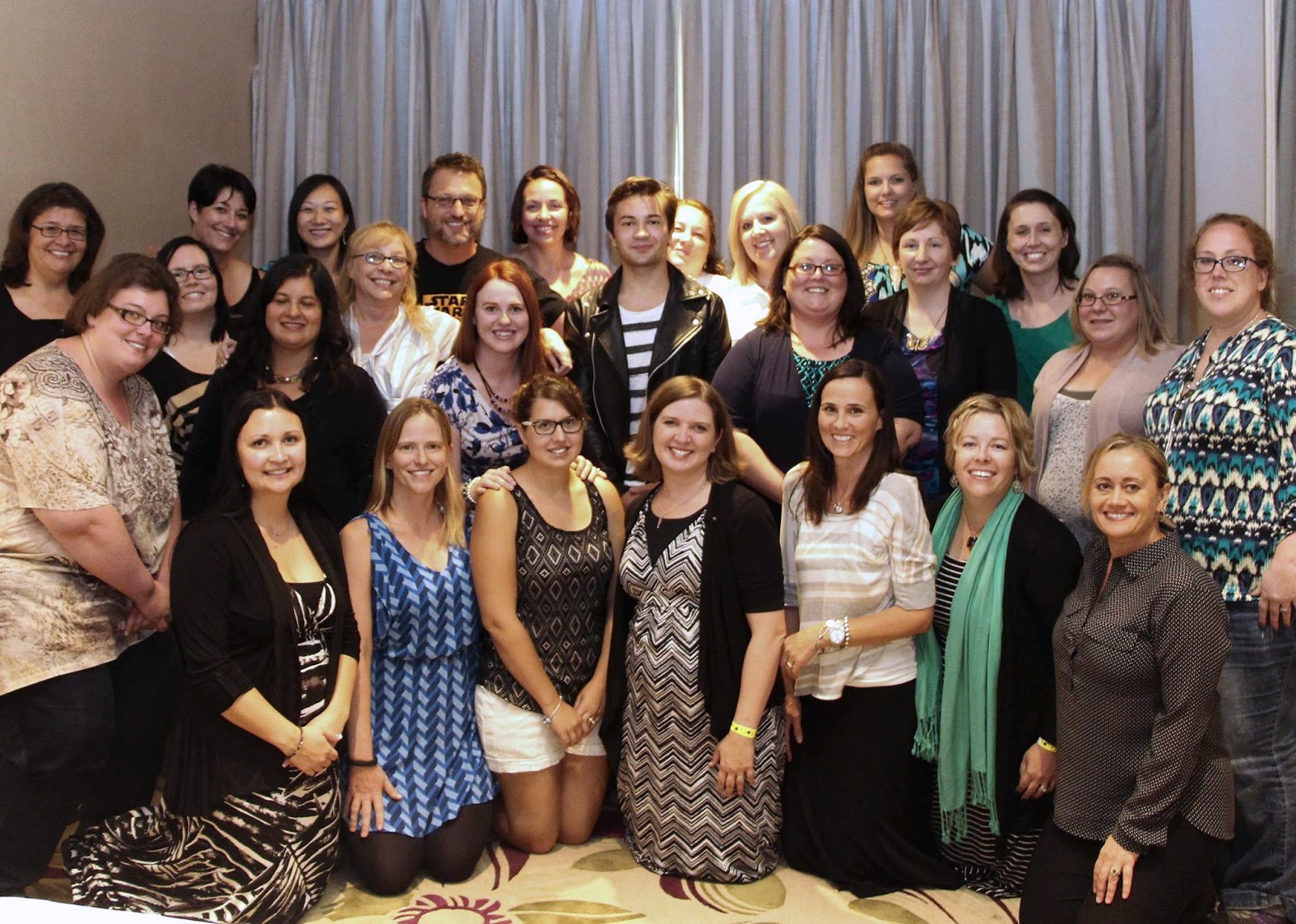 A cool fact, the actors are all in the same room as they voice out scenes for the Star Wars Rebels series.  I think that definitely showed through in the interview, Steve and Taylor have a great camaraderie and seem to be BFF’s!  A far cry from Ezra and Zeb, that is for sure.  Be sure to check out the series airing tonight, it is definitely worth the watch!

Disney is providing me with an all expense paid trip to L.A. to attend the #VeryBadDayEvent and #DisneyInHomeEvent in exchange for my coverage.  No other compensation is given and all opinions in my posts are 100% my own.  Disclosure Policy.
Share
Tweet
Pin
0 Shares
Guide For Geek Moms