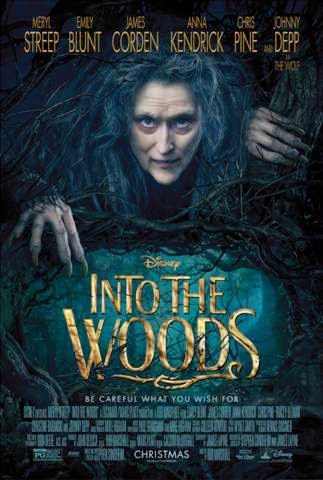 Already with 3 Golden Globe nominations, including Best Picture, Disney has done it again with it’s release of Into The Woods.  Into The Woods, which opened Christmas Day and is directed by Rob Marshall, is a witty story which takes classic fairy tales and mashes them up into one great movie.  It begins with the Baker (James Cordin) and the Bakers wife (Emily Blunt), who live next door to the witch (Meryl Streep), and finds out that years ago the witch placed a curse on the home and whomever lives there will be barren.  She then proposes to reverse the spell if they venture out Into The Woods to retrieve certain objects for her; a milky white cow, hair as gold as corn, a golden slipper and a red cape.  This is where the story begins to mingle with the rest of the classic fairy tale stories…

Meet Cinderella
And where do they find this golden slipper in the woods?  From Cinderella (Anna Kenndrick), of course!  Although this movie includes these classic fairy tale stories, they totally don’t follow the classic fairy tale plot.  This is first obvious in the Cinderella story where she attends Prince Charming’s Ball for three nights and runs from him (through the woods) every single night despite his traps to stop her.  It also shows her sly side as she strategically leaves her slipper for the Prince to find and seek her out.  Now while my favorite character in the movie was Johnny Depp as the Wolf, I would say the second most remember-able character is Cinderella’s Prince Charming, played by Chris Pine.  The Prince first seems like the classic fairy tale Prince that finds his true love and lives happily ever after but he totally has some “Oh no you didn’t!” moments that will totally throw you for a twist!

Meet Rapunzel
Rapunzel, Rapunzel let down your “hair as gold as corn”!  Rapzunel, played by MacKenzie Mauzey, is actually the sister of the Baker.  She was taken by the Witch as an infant and put in her tower until she meets her Prince.  Yes, this story actually has TWO Princes and they are brothers to boot!  How fun it was to watch the twists and turns in this film!

Meet Jack
And then there is Jack (Daniel Huttlestone), his Mom (Tracey Ullman) and his milky, white cow.  Jack takes his cow through the woods to the next town to sell him because she no longer produces milk and they are starving.  Before he reaches the next town, he meets the Baker in the woods and sells his cow for some magic beans (which was stolen years before from the Witches garden).
The cool thing about this movie is, just when you think everyone “lives happily ever after”, that is exactly when everything becomes chaotic!  I love how Disney has taken a different turn these days and gives their fairy tale films a more realistic ending but keeping its worthy lesson.  This movie is definitely a must see!  So, what are you waiting for?  Do yourself a favor and see first hand why everyone is going Into the Woods!
Share
Tweet
Pin
0 Shares
Guide For Geek Moms