Skip to Content
Share
Tweet
Pin
0 Shares
Disney provided me with an all expense paid trip to L.A. to attend the #CinderellaEvent in exchange for my coverage.  No other compensation is given and all opinions in my posts are 100% my own.  Disclosure Policy.

Sandy Powell, Costume Designer for Cinderella (now in theaters), knows how to stand out in a crowd.  At the world premiere of Cinderella, surrounded by numerous stars who were out for the film, I couldn’t take my eyes off the fiery haired woman who walked across the carpet exuding confidence and style.  At the time, I couldn’t place her face to a name but I just knew she just had to be a mega-star.  The way she walked through the crowd with a smile on her face and her head held high, she commanded an audience.
And then our paths crossed once more, the next day as myself and 24 other bloggers sat down to interview the stars from Cinderella, in walks Sandy Powell.  It was the mystery woman from the red carpet and suddenly it all made sense.  Of course Sandy Powell exudes confidence.  She is an Oscar winner and one of the most talented costume designers of our time.  Check out our interview:

On choosing the colors
I chose all the color palettes for each of the characters and I work closely with the people who design the sets. And the set dressing, so that we make sure that nothing clashes with the curtains and all the furnishings.  The colors all of my doing, that’s one of the things I really really enjoy more than anything else.

I don’t pick colors for symbolic reasons. I pick colors because they feel right and because I like them.  I have a much more instinctive feel or intuitive reaction.  And response to color as opposed to, I’m doing this because it symbolizes this or symbolizes this.  The green does represent envy.  All her (Evil Stepmother’s) colors were chosen, they’re cool colors.  None of them are kind colors or fresh colors or youthful colors.  Particularly though, I think they’re attractive colors ’cause I wanted her to look like a fashion plate and attractive. But they’re strong, all of them are kind of bit mean. 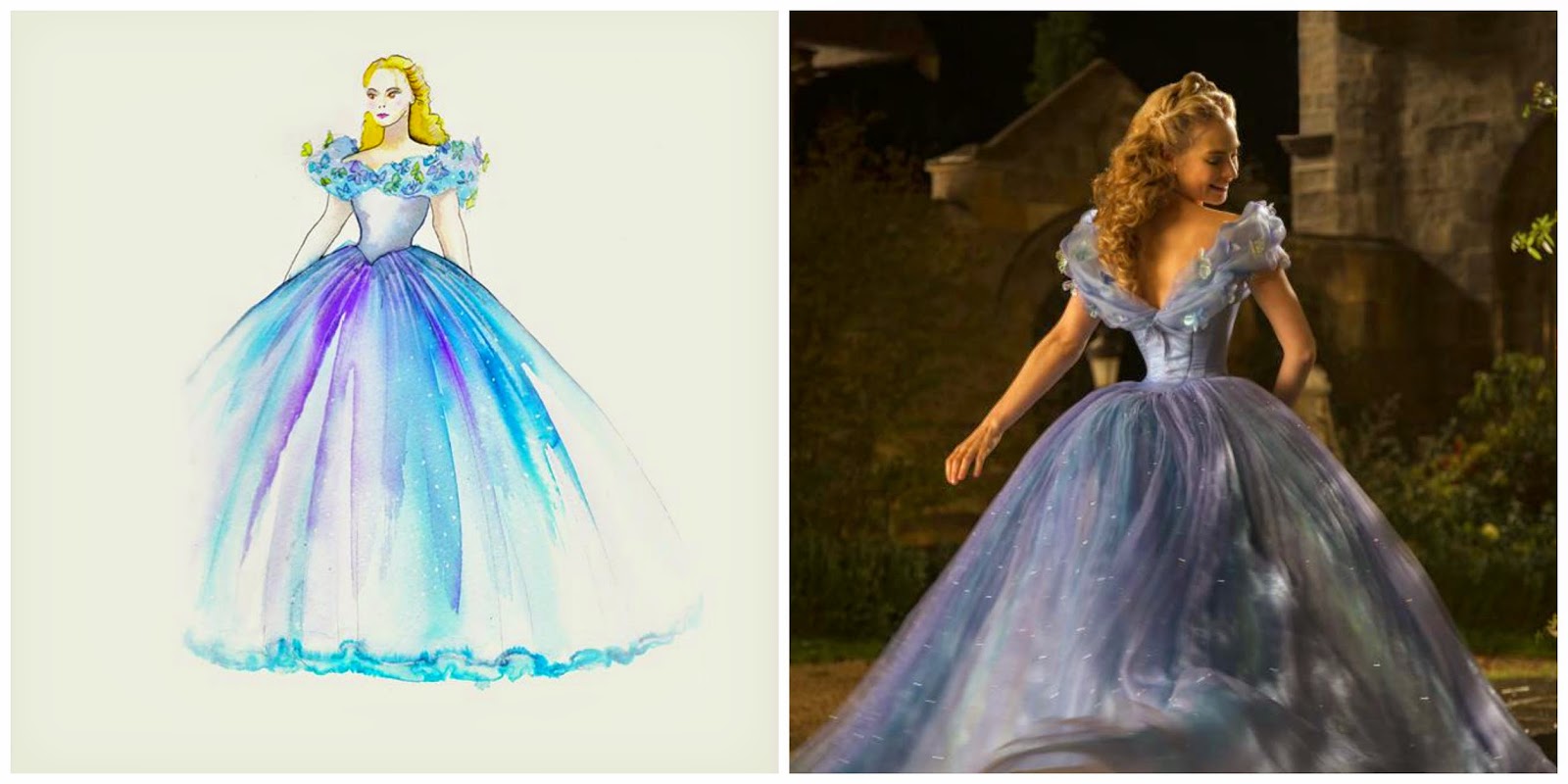 Her favorite costume
They’re all really meaningful to me.  It’s like they’re like my children, you don’t have a favorite.  You like different ones at different times of the day.  But of course I’m incredibly proud of the ball gown.  You can’t not be because that’s the one that took the longest.  I spent the longest on it, developing it.  It might not have worked but it came out exactly how I hoped.  I’m proud of that one.  There are others that I love, I like the men’s as much as the women’s. I like them all or they wouldn’t be there.

The Fairy Godmother’s costume
It was an idea I had that was rather ambitious and to be honest, we didn’t have enough time to really develop it. It could have gone a lot further and been a lot more success, not to say it wasn’t successful. I think the costume as a whole works in the film. But I had this mad idea that she actually literally twinkled all over.  It was to be choreographed with what she was doing.  We got the lighting designed and all the circuits made up by this lighting company but it took a lot longer than I expected.  Then we couldn’t actually really construct the costume till we had the lights done. So we were waiting and waiting, waiting for the lights to be finished. We knew the shape of the costume.  I had the underpinnings done like the corset shape.
We had all the fabric that need to go on top of it. But that had to be worked in with the lights. So that costume actually ended up being really rather thrown together at the last minute.  I kind of didn’t like it, it looks like it’s been thrown together. In a way, I think it’s quite funny that it looks like it’s been thrown together. It looks like she’s made it, you know, thrown it together. And the lights don’t work properly, really.  It’s sort of like the magic doesn’t work that well the first time. I think it’s quite appropriate that it’s sort of lit up a bit.

How long did it take to make the costumes for Cinderella?
I was actually working on this for over a year, from start to finish.  Till the very last day of the shoot. Actually, one of the last things we shot was the wedding scene and the wedding dress was actually the last thing I designed.  That was really right towards the end of filming. So at least a year from start to finish. 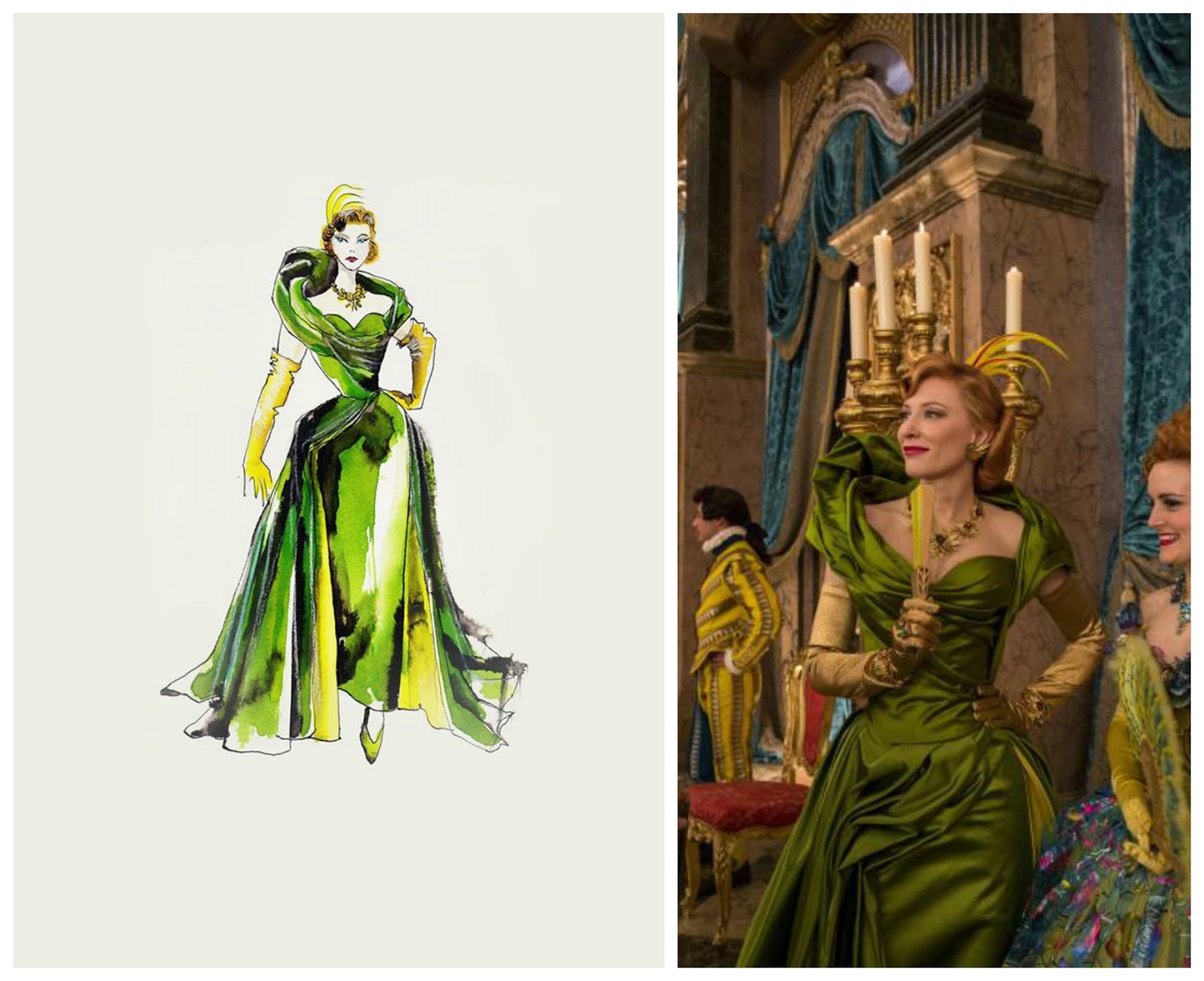 Advice to aspiring designers
I’d advise anybody who wants to do costumes, to learn how to sew.  Learn how to make them.  You’d be surprised, there’s an awful lot of costume designers who don’t know how to do it.  I really don’t know how you can design and how you can talk to somebody else who’s making something, unless you know how to do it yourself. You have to start at the bottom, you have to start at the bottom and be a maker.  Actually learn how to construct and sew. So you understand the construction and the engineering, which is what it is.

Costumes looks great. I hope the movie will be great for kids, lately all we are watching are cartoons. I would be a nice change.