Last week I had the opportunity to attend an early premiere of Avengers: Age of Ultron, which opened in theaters May 1st.  As you know, I have been counting down the days for the release of this movie.  My daughter and I had even celebrated it’s release with an Avengers weekend filled with Thor costumes and Avengers treats  I have to begin by saying, this movie will be the big blockbuster of the Summer; it did not disappoint!  If you are one of the few that have not seen it yet, GO and take your Mother because she will want to see Chris Hemsworth flexing his Thor muscles!
Top Reasons It’s a MUST See

The Laughs
What I have always appreciated about MARVEL movies and one of the many reasons I am so drawn to them is because the characters are not afraid to laugh at themselves.  As soon as the movie began, with a high action scene, you see Captain America and IronMan taking fun jabs at each other while battling the bad guys.  This is just the beginning of many laughs to come throughout the movie.  My absolute favorite scene was a laid back moment when all of the super heroes were sort of “hanging out” and they each tried to pick up Thor’s hammer, Mjölnir.  It will have you rolling in your seat!

The Heart
I believe one reasons MARVEL movies are so compelling is its ability to connect personally with the characters.  You see much heart in this movie with many of the story lines.  The relationship between Black Widow and Bruce Banner will have you rooting for a deeper relationship between them.  The sibling love between the twins, Quicksilver and Scarlet Witch, will have you rooting for them even though they are on the “wrong side”.  And oh, Hawkeye.  After watching Avengers: Age of Ultron, he has become one of my favorite characters!

Hulk Smash!
You always know going into a MARVEL move that you will see some great action scenes, this was true of Avengers: Age of Ultron.  However, one scene in particular will be worth the extra price for those 3D glasses.  When Hulk gets a bit out of control after Scarlet Witch “gets into his head”, he goes on a rampage throughout the city and IronMan’s Hulkbuster is called into action.  This fight scene truly shows the power that is Hulk and will have you on the edge of your seat. 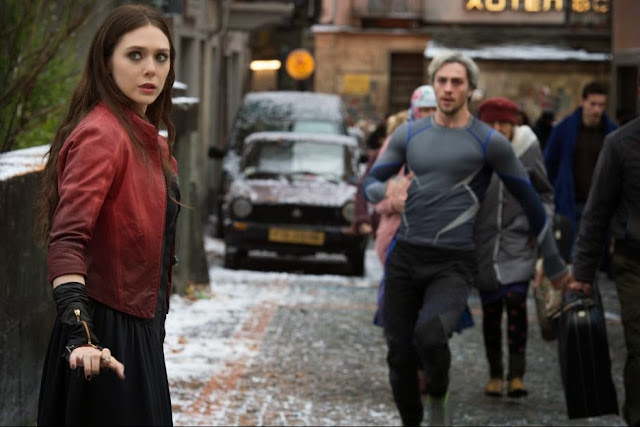 New Characters
As I’ve mention, the twins Scarlet Witch and Quicksilver are introduced in this movie and really bring super powers to the next level.  I think if I was able to choose any power it would be that of Scarlet Witch, not only is she able to throw crazy energy balls at her opponents but she is also able to mess with others minds.  Her mind control is really showcased at the beginning of the film where she gets into the heads of many of our Avengers.  However, unlike Scarlet Witch, I would totally use my powers for good!
What’s To Come
Along with the introduction of new characters, this movie offers tons of plot twists; even a death of a major character that you won’t see coming!!  It’s a must see and has a great set up at the end for what’s to come in The Avenger’s future.  So what are you waiting for?  Go see it!!
Like THE AVENGERS on Facebook.
Follow THE AVENGERS on Twitter.
Visit the official website.
Marvel’s AVENGERS: AGE OF ULTRON will hit theaters everywhere on May 1st!
Share
Tweet
Pin
0 Shares
Guide For Geek Moms