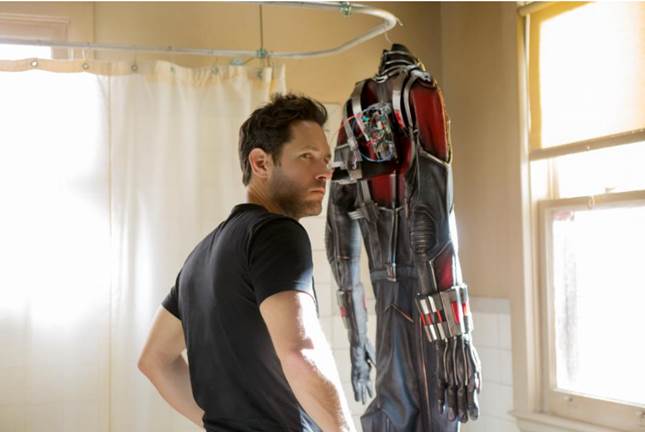 Are you ready for the next huge blockbuster of the Summer?  This July 17th, Marvel’s ANT-MAN is opening in theaters and you WILL want to be there!  Starring Paul Rudd, Evangeline Lilly and Michael Douglas; it is sure to be an awesome film.  I. Can. Not. Wait!
Check out the new spot, it will have you begging for more:
The next evolution of the Marvel Cinematic Universe brings a founding member of The Avengers to the big screen for the first time with Marvel Studios’ “Ant-Man.” Armed with the astonishing ability to shrink in scale but increase in strength, master thief Scott Lang must embrace his inner hero and help his mentor, Dr. Hank Pym, protect the secret behind his spectacular Ant-Man suit from a new generation of towering threats. Against seemingly insurmountable obstacles, Pym and Lang must plan and pull off a heist that will save the world.
Marvel’s “Ant-Man” stars Paul Rudd as Scott Lang aka Ant-Man, Evangeline Lilly as Hope Van Dyne, Corey Stoll as Darren Cross aka Yellowjacket, Bobby Cannavale as Paxton, Michael Peña as Luis, Tip “T.I.” Harris as Dave, Wood Harris as Gale, Judy Greer as Maggie, David Dastmalchian as Kurt, and Michael Douglas as Dr. Hank Pym.
Peyton Reed directs Marvel’s “Ant-Man” with Kevin Feige producing and Louis D’Esposito, Alan Fine, Victoria Alonso, Michael Grillo, Edgar Wright and Stan Lee serving as executive producers. The story is by Edgar Wright & Joe Cornish and the screenplay is by Edgar Wright & Joe Cornish and Adam McKay & Paul Rudd. Marvel’s “Ant-Man” delivers a high-stakes, tension-filled adventure on July 17, 2015.
Like ANT-MAN on Facebook
Follow ANT-MAN on Twitter
ANT-MAN opens in theaters everywhere on July 17th!
Share
Tweet
Pin
0 Shares
Guide For Geek Moms