Corey Stoll plays Darren Cross A.K.A. Super Villain “Yellow Jacket” in Marvel’s Ant-Man, opening in theaters across the nation July 17th.
Question.  If you could choose any role in the Marvel Cinematic Universe, would it be a super hero or a villain?  I know what I would choose:

Being the super hero is so overrated, I’d choose the villain role!  Wouldn’t it be a blast to dive into the “dark mind” of an evil super villain?  I even have a character in mind.  As a Scientist, I believe I would be perfect for the role as Yellow Jacket’s gorgeous side-kick “Bumble Bee.”  The more curvaceous of the flying insects but with a hell of a stinger!  To prepare for my role as “Bumble Bee”, I had the opportunity to sit down and interview THE Yellow Jacket, Corey Stoll. 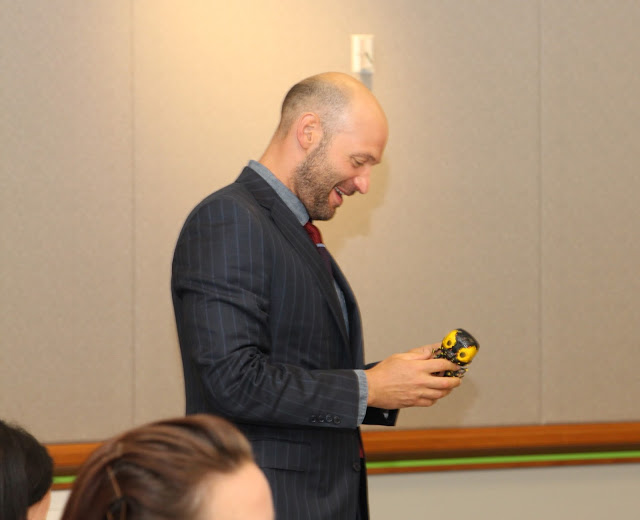 Corey walked into the room with a charming smile, dashing good looks and a height that commanded his presence.  And before he sat down to begin the interview, he did exactly what I would do in his shoes.  He checked out his Funko POP Marvel Yellow Jacket action figure!  So, of course the interview had to consist of “action figure” inquiries.
Now that he has played a character which is an action figure, will he become a collector?
“I will!  I hope I can get a discount because I think I’ll be buying multiple.  I have the LEGO set, which is really cool.  I’m about to have a baby and I learned that it’s a boy, not that I wouldn’t have a girl play with the action figure. But my second thought after, you know, thank God he’s healthy, was I’ll be able to play with my action figure with him.”
Will he raise a Marvel fan?
“Yes, definitely.  I think DC is a little too dark until he’s a little older.  But we’ll have to manufacture our own action figure for my wife so that she doesn’t feel left in the dust.” 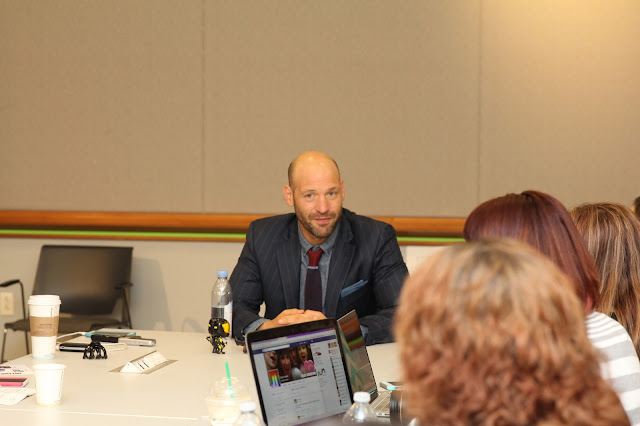 How difficult was it to play a villain?
“It really wasn’t hard at all.  My first day of shooting was sort of a microcosm of what the whole shoot would be.  In the morning, it was all motion capture, just stunts.  It was like being in a silent film where you run this way and then duck and then pick up a toy train and throw it, you know, pure play.  That was really fun, and then the afternoon was this very quiet scene with Michael Douglas where I show up at his house unannounced and it’s our really most sort of intense scene.
It was just such a great way to start because there are these two extremes of what this role would be.  It was just fun. I think as we went on, there was a lot with Peyton trying to calibrate.  We want to make sure this character is scary but I also loved what a loser he was.  He’s the least cool guy in the world.  He wants to be Tony Stark.  He wants to be the coolest guy in the world.  He’s puffing himself up with these Tom Ford suits and driving an Aston Martin, but he knows that he’s not that guy.  That’s the irony; he’s trying to buff himself up in the end to impress this father figure and it’s exactly the opposite of what a father figure wants.  So, I think the script was really smart about giving very real, playable motivations.”
Was he a Marvel fan before his role in Ant-Man?
“Yeah.  In Junior High School and High School, I was really into comic books starting with the real Super Hero Marvel Comic Books and then getting into some sort of darker stuff.  But yeah, Spiderman, X-Men, and all that stuff.”

What was it like wearing the Yellow Jacket Suit?
“Actually, I did two separate trips down to Atlanta just to try on different versions of the suit and it just never looked right.  I remember the first time I tried it on, everybody was trying to convince themselves that it looked cool. Yeah, yeah, it’s gonna be great, just a little CGI over there and you know, it looked great.  I just felt like a Power Ranger. Luckily, smarter heads prevailed and they just did it all CGI.”
Does he relate to his villain character?
“Yeah, some things didn’t really end up in the film but, when he’s first selling the Yellowjacket and this technology, we really brainstormed about what would be the beneficial applications of this technology.  You realize that this actually could save the world.  There’s so many things you could do; you could get a shipping container down to the size of a Volkswagen Bug and shipping cost would be like, nothing.
And then the carbon emissions would become much smaller, or you could maybe shrink the smoke as it comes out of a coal powered plant or you could shrink a surgeon down to do microsurgery . It really is like this incredibly Utopian thing.  I think there is that element in Darren that he wants to change the world for the better.  It’s just that this military application happens to be the most lucrative and he just the wrong choice.  Having Michael Douglas be the person playing this father figure, that was very easy to sort of identify with, wanting to get this approval.  As a youngish Actor, I would like his approval.  That’s pretty rewarding.”
Any hesitation in joining the Marvel Universe as the bad guy?
“No.  I had a general meeting with the executives at Marvel years ago; that was the first thing I said when I met with them was, ‘I want to play a villain.’” 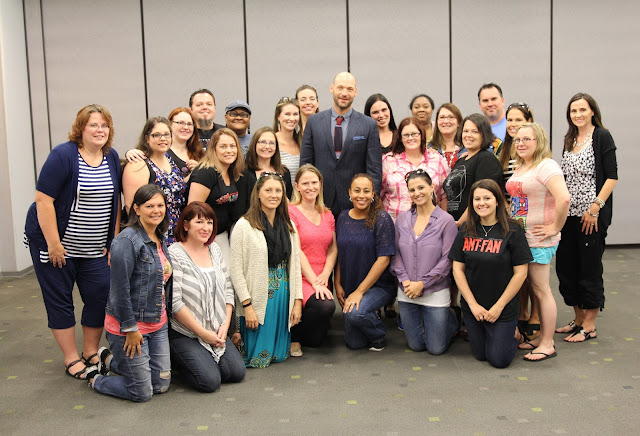 After the interview, Corey was kind enough to take a group photo with us; very “un-villain” of him!  However, if I’m going to pull off this villainous character idea, I really need to work on my group photo skills.  I always look like a floating head in the back.
Like ANT-MAN on Facebook
Follow ANT-MAN on Twitter
ANT-MAN opens in theaters everywhere on July 17th!
Disney provided me with an all expense paid trip to L.A. to attend the #AntManEvent in exchange for my coverage.  No other compensation is given and all opinions in my posts are 100% my own.  Disclosure Policy.
Share
Tweet
Pin
0 Shares
Guide For Geek Moms