You know the biggest hit of the Summer, Ant-Man, is opening in theaters across the nation this Friday, July 17th, right?  And you might recall, I was flown out to LA a few weeks ago to attend the Ant-Man press junket, where I interviewed the cast of the film.  If you were loyally following my #AntManEvent hashtag, like I know you were, you might have ran across this image:

Now I’ve made a few jokes (in a previous post) about taking a selfie with Michael Douglas, who plays Hank Pym in Ant-Man.   Yeah, it was a joke or a dream…  However, during the interview with Michael Pena, T.I. Harris and David Dastmalchian, also known as the ANTourage, I really DID take a selfie during the interview!  Actually, Michael Pena took the selfie with me and 24 other bloggers and posted it up on his Instagram account!  It was glorious!

Let me first back up a bit.  If I had to give an award to the “Most Fun Interview Ever“, it would have to go to these three right here.  It began the moment they walked into the room of applauding Mom & Dad bloggers.

They might have looked like they were a little taken aback.  However, the huge smiles across each of their faces was evidence they were soaking it up!  Even commenting:

Michael: Can you tell my wife to do that? You’re amazing.

After many, many laughs and posing for our Instagram selfie, the interview began:

How long did it take to do David’s hair?

David: Okay really quick, this is great. Yvette Stone, she actually did the hair every day. She helped create that look for Kurt. And weren’t you sitting here in the chair for half an hour, 45 minutes.

Yvette: Yeah, we got it down.

David: We got it down. It starts taking a long time, but by the end of the movie, like man we nailed it, and the tattoos and everything. It was amazing. Make-up Artist Greg Funk did the tattoos, but it’s a cool thing when you’re an actor and you get the physical world that’s created for you.
So like, the wardrobe nailed exactly what I thought about Kurt- the hair. And I would come out of hair and make-up and put on my wardrobe and I walk out of my trailer and look in the mirror, and I’d be like, ‘This is good.’

Can you share scene that you all really enjoyed filming together?

T.I.: All of the scenes that we did together to me were funny. A lot of the van stuff. You don’t remember the first night we were in that van, the van in San Francisco?  I think it was the scene when Scott was breaking into Hank Pym’s house for the first time. I mean, the stuff that didn’t make it on screen, now that’s the goal. That’s the action.

Michael: I mean, that would be another kind of movie.

David: You know what man, I have to ask you was that line, ‘I let you let me?’

Michael: Yeah that got a huge laugh, and there was only 10 of us in the…

David: It was intimidating too. It’s scary. ‘Cause we’re big fans of these guys and everybody in the film and so the time we’re sitting here in the van. And they started to just go and rif, too. And they made me feel really welcome immediately, which was a great feeling. You feel more creatively free to do that, but like there were some jokes, obviously not all of ‘em can make it in the film, but….

David: And dancing, we had some fun dancing.

T.I.: Yeah. And you know every time he would make a joke because him and Luis and Scott were cellmates supposedly. So every time…

Michael: No we were cell mates bro.

T.I.: Yeah. So every time they’d make mention of, “You know it’s just like when we were in the cell,” and we were like, “Oh really? Oh.” You know things like that.

Michael: You get close bro.

David: And then you don’t talk about cells. 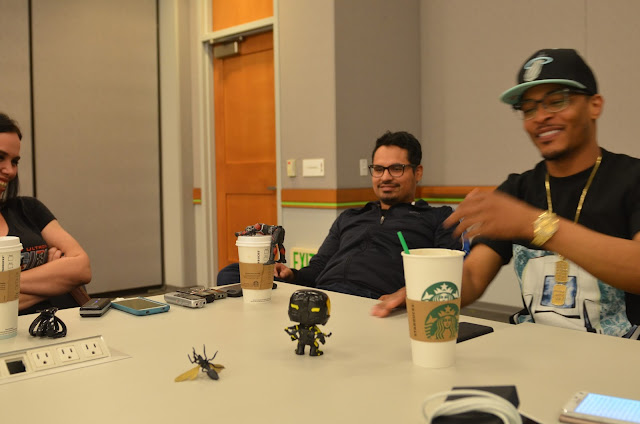 Is Michael that funny in real life?

Michael: No. I was always a quiet kid, to be honest.

Michael: Yeah. I remember I got messages on Facebook, ‘Out of all people to be an actor you’re the guy?’ My best friend’s from Chicago and he was like, “Yeah dude. You know he was the quiet kid.” I was Captain of the Wrestling team and Track Team, and you know I loved sports and stuff. So that’s the only way that I really made friends, but I was kind of a nerd, to be honest. It’s hard to believe.

Michael: Were you really?

Michael: You know what, but he’s a smart dude though. He knows. T.I. being a nerd. I’m like, ‘I would believe it.”’ He’s a smart dude. I mean, he doesn’t rap about like just dumb shit, you know.

David: …right tho because we know, I know him. I know he’s done some comedy work before, but he’s so famous for these killer dramatic roles and stuff. And the first time we’re on set and he started making T.I. and I just bust out, I was like that’s not the dude that I was expecting.

David: He’s so brilliant in this film, and I love it.

Michael: I’m imitating this guy.  I won’t say his name, but he’s in my neighborhood. And I had the blessing of going to prep school and living in the ghetto, you know what I mean? Is what happens or whatever. And so I’d travel like an hour in the morning just to get to that school, come back and then all of a sudden “Dave’s” like, ‘And how did it go man? You want a nickel bag?’ And I’m like, ‘No man, I’m good man. I gotta’ study and stuff.’ He said, ‘But if you don’t want a nickel bag it’s cool.’
You know, what I mean? ‘I got your bank. A regular you know what I’m saying?’

And then you know he’s the kind of dude that you always see. He got a girl pregnant when he was 13. Yeah, which is amazing, but he’s a really great dad, when he’s not in jail. And he’s the kind of dude that was like, ‘Hey whatcha’ do this weekend?’ And he’s like, ‘Uh, I went to jail, guy.’ ‘What you go to jail for?’ He’s like, ‘Just smokin’ weed.’ And I was like, ‘Actually, like smokin’ weed is not illegal.’ ‘Like what, what, show me what happened.’

So it was like I was waiting for a movie to put that character in there. It was odd because he’s the most optimistic criminal that I’ve ever met in my life. But, you know, everybody loves him, but at the same time, like, you gotta’ be kidding me. So, that’s Luis.

How did it feel being the bigger comedian, Michael?

Michael: The what? Bigger comedian. What you don’t like Paul Rudd? I’m like is that a compliment?

You know, Paul had a lot to do. You can’t really go for the joke when you’re trying to propel the story. So I would do stuff that the Director would be like, ‘Yeah that’s too much.’ I think it helped that I based it off somebody who, you know, that actually exists. So I had infinite ideas about what he could do. But it’s more of a compliment and then when I see Paul.

How did they get involved on the project?

David: I auditioned in January of 2014 for Sarah Finn and I auditioned for it and I got the sides and the role description, and it’s so different than anything I’ve gotten to do before. And my immediate goal was like, ‘Hey I’m a huge comic geek.’  I’ve loved comics my whole life. And I want something that my mom can go to the cinema and watch and not be terrified, ‘cause I tend to play some creepy guys. So I went after it, and I created a voice and the character, and then she liked it so she for the Director at that time and I got to read for him, and he liked it.

Then I got to go to test. So it was a very long process for me. Two auditions and then a test, and then I got the part, and then everything started to change. I was like, ‘Oh my gosh, am I still gonna’ get to do a part in the film?’ And then my Manager called me like 2 months after we were starting and goes, ‘Great news. You’re going to Atlanta to test. Uh to do tests.’

And I didn’t understand what that meant, and I had a newborn at home, and I was very frazzled, and I was very nervous. And I thought okay like I’m gonna’ go and do another audition. So I went to Atlanta, and Michael was there and everybody else. And I’m meeting everybody and I’m so nervous. And I realize what they meant by that kind of test. ‘Cause like hair and make-up test. It’s like I had the part. I was in.

T.I.: For me, I think along when it was first mentioned that there would be an Ant-Man film someone mentioned me in association with it, and all over the blogs and everywhere. Like, ‘Yo T.I.’s gonna be in it.’ And I was like, ‘I have no idea what you’re talking about.’  I don’t know who it was or what it was that mentioned me, but I think over the years different people fell out and there were starts and stops and starts and stops.  So finally maybe 2 weeks or 3 weeks before they began shooting I got a call saying, ‘Are you in Atlanta?’ ‘Yeah.’ ‘Well can you go do an emergency reading for Ant-Man over at?’ ‘Yeah okay, I guess.’

Michael: It must be cool being a rapper. ‘If I have to.’

T.I.: I go and read and they give me a bunch of anonymous scenes to read and they called me back. And so then I have to find a way to re-arrange the rest of my schedule to actually take advantage of this great opportunity to do this film.

Michael: He’s got a crazy schedule. I swear to God. He’d fly in like that morning oh so many times.

David: From around the world.  He’s like ‘Oh I was in Africa last night playing.’

Michael: Yeah. You know we could never complain.

David: On Friday and we were shooting on Monday. It’s like, ‘Wow.’

I have to admit, I did not want this interview to end!  I’m sure after seeing Ant-Man, many fans out there will agree, we want more ANTourage!  Here is what they had to say about that:

David: Trust me. I’ve got the whole thing, we show up with Dr. Strange, we’re gonna’ help all of his hair and his style. But, yes that’s a dream.

T.I.: Even cooler though is they should give us a comic book.

David: Oh see, you put that out there.

David: The comic’s so great and fun for people because not everybody has superpowers, right? But these guys, we’re good at something.  What do you do with the thing that you’re good at? Are you gonna’ do something good in your life or are you gonna do what our past is or our characters? And I love that. I think that’s what makes these films great for audiences and families. I can see myself, that’s us. We are the audience, in a sense. The three of us.