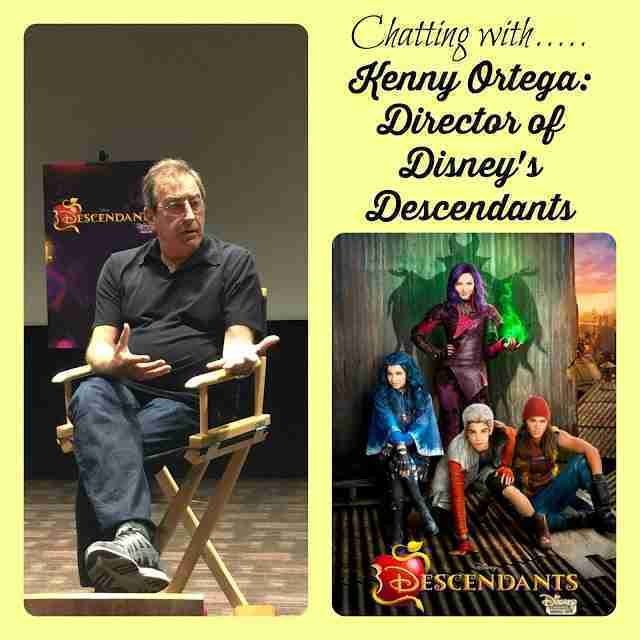 Disney’s Descendants premieres on the Disney Channel July 31st at 8PM.  Last month while in LA, I had the opportunity to screen the movie (review to come) and interview Director Kenny Ortega.  Now if you don’t know much about Mr. Ortega you should check him out, his resume is quite impressive!  Not only has he directed some fantastic films such as Newsies, Hocus Pocus and the High School Musical’s; he’s also well known for his choreographic work.  He’s worked as a Choregrapher on films Xanadu, Dirty Dancing, Ferris Buellers Day Off and Michael Jackson’s 2009 documentary This Is It, to name a few. What an extraordinary talent, I wasn’t sure what to expect when meeting him.  Frankly, I expected him to moonwalk into the room and then take Baby out the corner and dance to “The Time of My Life.”  Or maybe that was my hope.  And maybe I was “Baby”. 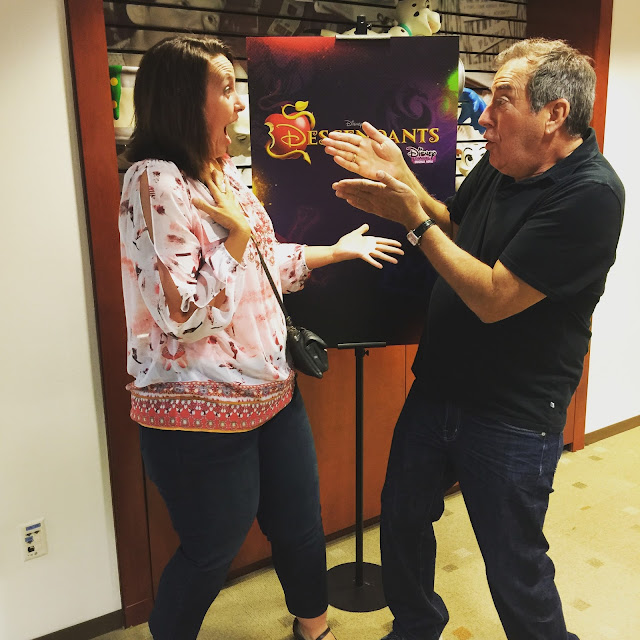 When Kenny did walk into the room, he spotted me immediately.  The conversation went a little like this:
Me: “Oh my goodness, Kenny Ortega, it’s you!  So nice to see you again!”
Kenny: “Amanda, is that you?!  What are you doing here?“
Me: “I am here to interview you, of course!  You do know I am a famous blogger now, right?“
Kenny: “Wow, what a small world!  When are you going to work on a project with me?  You know the world has to see your awesome dance moves.“
Me: “Oh, Kenny.  You flatter me so“
Then I woke from my daydream when Kenny actually did walk into the room and was greeted by 25 of us bloggers.  Here are some highlights of that interview. 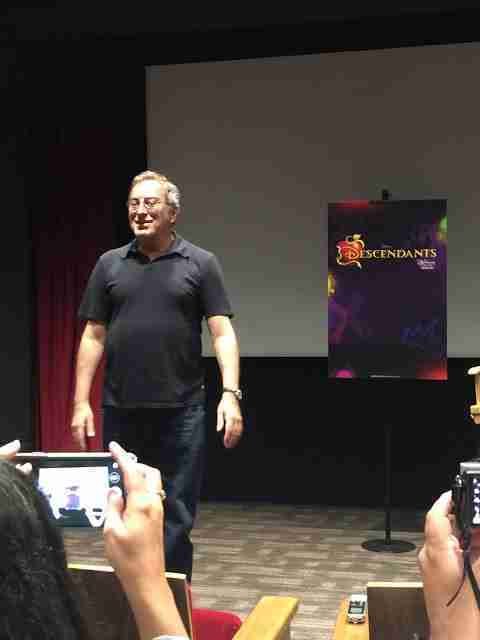 Joining Disney’s Descendants
“In the beginning, Gary Marsh [President and Chief Creative Officer for Disney Channel] reached out to me and said, ‘I’ve been waiting ever since High School Musical and our success together as a team to find something that had your name on it, that would give me purpose to call you and to say, ‘Come on back,’ and so I’m sending you something tonight. Will you take a moment to look at it? I hope that you feel about it as I do’.  When I read it, I was blown away.   As a kid that grew up watching Disney and watching Disney animations, Cruella De Vil, Maleficent, all of these magnificent Walt Disney characters and suddenly they were on the page, and I was like, ‘I’m being invited to be able to like play with these iconic heritage characters and their offspring, to develop brand new characters for Disney.’
Everything that happened thereafter, the wonderful writing team that I had to work with, the openness of this studio and the support that I felt from them, 5 months of looking for the cast, looking in Great Britain, all through Canada, all across the United States and even as far as Australia to find our Prince, and then to show up and to realize that everyone was excited in bringing something to the day. That there are selections that landed us with a company of people, whether they be behind the camera or in front of the camera, that really wanted to be there and so it was joyous, every minute of it. Every day I opened my eyes I couldn’t wait to get on the set.“
Favorite Song in Descendants
“I think ‘Rotten to the Core’ and I’ll tell you why. I started it as, as an actor at 13 years old, I was lucky enough to be in the original London touring production of Oliver and when I first read the script and started to imagine the world I thought of the Island of Loss, a bit of Dickens and a little kind of old London town under the bridge, that darker underworld.  I always I loved the idea of being able to take Rotten to the Core, use it as a character introduction and also to introduce us a bit to the island, what this place is.“ 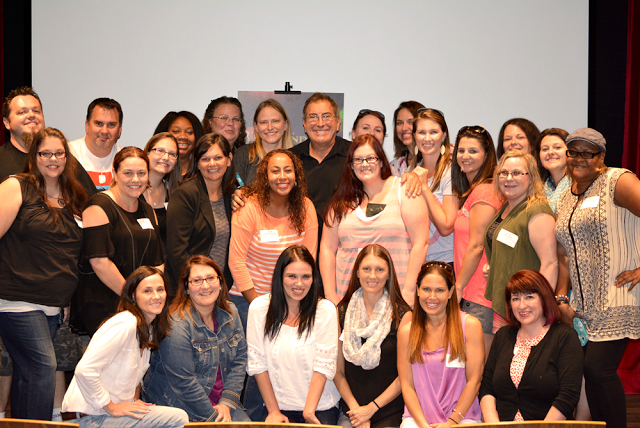 A No Kissing Movie
“Yeah, leave something, you know? There’s too much pressure put on that aspect of relationships. Get to know somebody, really know somebody. That was a conscience decision, I just think that we all have hopes that perhaps this might grow. You don’t know. You can’t predict, but it allows these children to mature into young adults and to blossom in ways that they’re not there yet.“
The Cast of Descendants
“I worked with Kristen Chenoweth, I directed her before and I’m in love with her. I saw her four times on Broadway in “Wicked.” I did get to see her opening night of “On the 20th Century,” and I’m going back for her closing night and party. I’m going to be part of the introduction of her getting her star on the Hollywood Walk of Fame, I’m a huge fan. I blush. I blush. She sends me videos and I drop the phone. But anyway, we were getting ready to cast our movie before the movie Maleficent came out.
And suddenly we kind of realized that Angelina [Jolie] was sort of taking up a lot of territory with her interpretation of Maleficent. Gary Marsh called me and said, ‘What do you think of Kristen Chenoweth to play Maleficent?’ It was not only a ‘What, yes I wanna work with her in any capacity, but what she’d do with this.’ She’s so brilliant. She’s so versatile, so capable. You know, she’s such fun, a real team player, and so it was a delight.  I was like, ‘Yes, let’s go after her.’ It wasn’t easy. She was a busy lady. When we finally got her to commit, it was a joyous day and no one was more excited than Dove [Cameron} who grew up idealizing her, and when Dove found out that Kristen was playing her mother in the movie, I mean fireworks went off.
Kathy Nagimy is one of my favorite human beings on the planet. She is an awesome lady. We stayed friends for over 23 years since we did Hocus Pocus and she always brings something to the table in everything that she does. These kids, I can’t say more about them. We put them through heck. Some of them auditioned eight, 12 times back again, back again, back again. That they came back and didn’t just say, ‘Oh, forget it.’ That they kept coming back was a part of what helped me realized that they were in it to win it and that whatever it took for them to land these roles.
Booboo Stewart had already done X-Men and Twilight and came back eight times, eight times. You know, when they first told me what about Booboo Stewart I was like, ‘He’s not gonna come in.’ Judy Taylor, our casting director, said, ‘You’re wrong, he wants to come in.’ And not only did he come in, he came back eight times to read with other actor and actresses and what a dream he is. What a dream. Isn’t he wonderful? A real star. They all are.“ 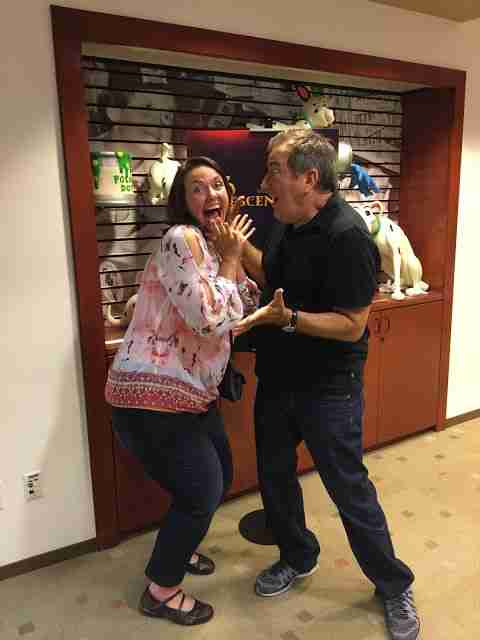 After the interview, Kenny was kind enough to take individual photo with us all.  It was such a pleasure to interview him.  He is such a great talent, humble guy and he even played along with my silly pictures!
As far as the movie goes, I am sure he will have another Disney Channel hit under his belt.  Descendants was amazing!  In fact there was one burning question we all wanted to know: Will there be a sequel?
“It’s up to them. You ask for it, you get it. I would love there to be one. I think I can speak for everyone from Kristen, to Dove, all of us. We had the time of our lives. We hope that there’s an opportunity for us to continue this but the fans will have to be the deciding factor.“ 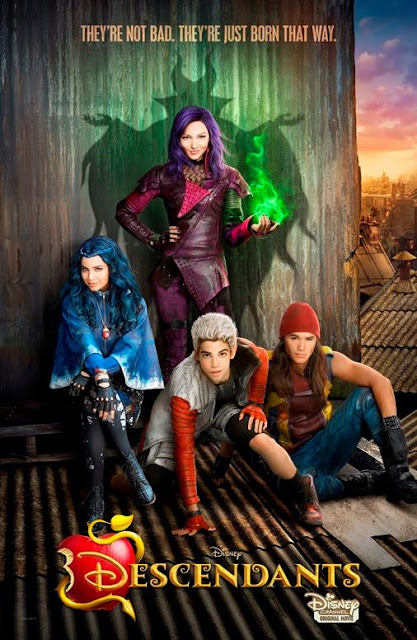 Disney’s Descendants will premiere on the Disney Channel Friday, July 31st at 8PM.  You won’t want to miss it!
And check out the first 6 minutes of this awesome film:
Disney provided me with an all expense paid trip to L.A. to attend the #AntManEvent in exchange for my coverage.  No other compensation is given and all opinions in my posts are 100% my own.  Disclosure Policy.
Share
Tweet
Pin
0 Shares
Guide For Geek Moms