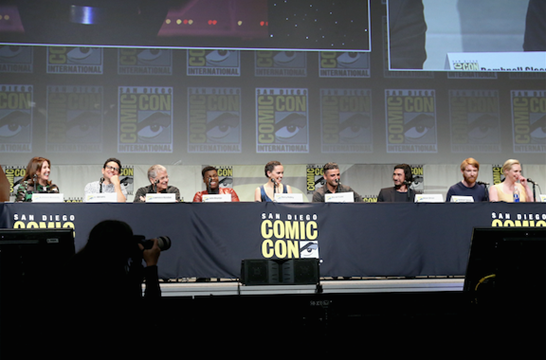 If I wasn’t jealous enough of the people who got to attend Comic-Con last week, this just put me over the edge!  If you are like me, you have been counting down the days, hours, minutes, seconds for the release of Star Wars: The Force Awakens opening December 18th.  Well, fans at San Diego Comic-Con’s Hall H received a special look behind the scenes of Star Wars: The Force Awakens by Director J. J. Abrams, Producer and LucasFilm President Kathleen Kennedy and Writer Lawrence Kasdan.  The filmmakers were then joined onstage by cast members: Daisy Ridley, John Boyega, Adam Driver, Oscar Isaac, Domhnall Gleeson, Gwendoline Christie, Mark Hamill, Carrie Fisher and Hans Solo, I mean, Harrison Ford!
Check out the reel:
Pretty friggin’ awesome, right?!  Those are some pretty lucky attendees!  Not only did they get to check out the reel but to be in the same vicinity as some of the people mentioned above?  Total bucket list stuff right there!

At the end of the Hall H presentation, the entire Hall H audience of more than 6,000 fans were all invited to continue the celebration and join cast and filmmakers at a surprise Star Wars Fan Concert. The San Diego Symphony performed the classic Star Wars music from John Williams at the Embarcadero Marina Park South.