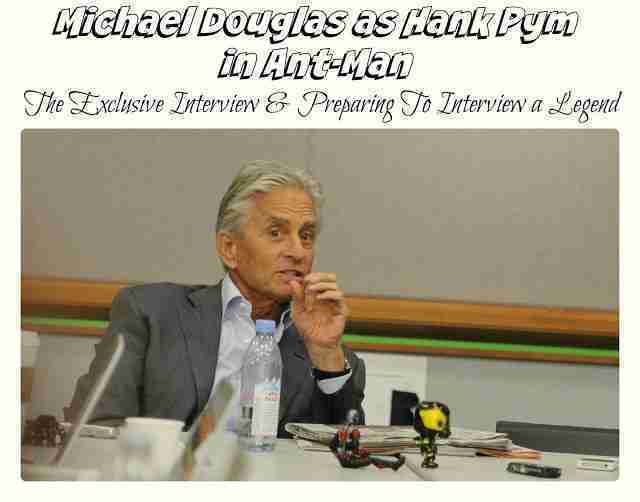 First, make sure I look drop dead gorgeous.  Check.  One simply does not interview a Legend looking drab.  I was going to look good in my Marvel attire dress, with the old school art on it!  I mean, this is one of the most awesome actors, in one of the most awesome movies of the year.  Yes, I let my Fan Girl side show!
Watch Ant-man. Check.
Prepare my questions for the interview.  Check.

Get into the “Ant-Man mode” by making a Dubsmash video with a Rockin’ Dad Blogger, The Rock Father.  Check.  I was ready for the interview! 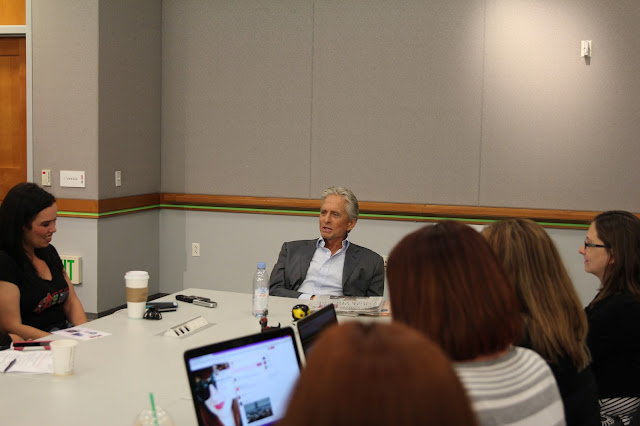 The moment arrives, Michael Douglas enters the building, with a bottle of Evian water and a newspaper in hand.  He looked to be in great spirits and good health and I… Completely.  Freaked.  Out.  Maybe I didn’t show it on the outside, I am sure I looked cool and collected but on the inside I was all like “Oh my gosh, Oh my gosh!  That is Michael Douglas sitting 2 seats away from me!!!”  I have a few press junkets under my belt and I’ve never gotten nervous interviewing talent.  Sitting next to Michael Douglas, I have to admit, I got nervous.  Despite it all, I even managed to ask him a question.  Here are some highlights of the interview: 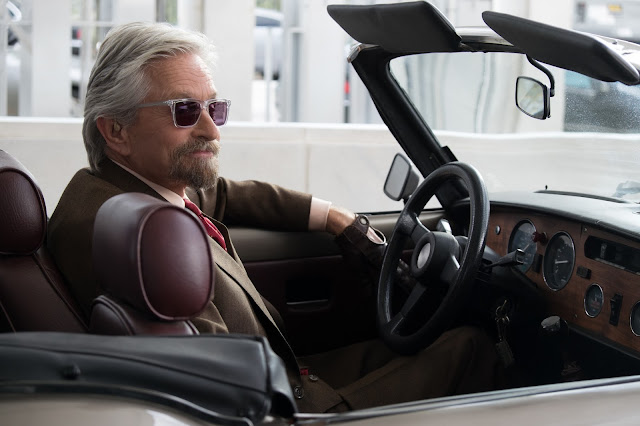 How he prepared for his role as Hank Pym.
I’m not a comic book guy.  I was not as a kid.  There was one I kind of followed, but since it’s not in the Marvel world, I don’t think on it necessarily.  When they sent me this script, they also sent me a lovely leather bound book with about two of the Ant Man comics.  So before I read the script, I opened that up and sort of familiarized myself with the different characters and a little of the back story.
His motivation for joining the Marvel Universe.
Something different.  Two of my best buddies are Jack Nicholson and Danny DeVito, and each of them had a great time as the Joker and as the Penguin.  I remember them talking about it.  I’ve never been offered anything in this realm before but when this came up, I thought , this will be great.  This will be cool.
My 14-year-old son, I told him all about it and he was like my agent.  He said ‘Dad, you know what?  This is a whole new audience for you.’  I always try to do something different and I was really curious about effects and all of that.  And so that really was the reason. 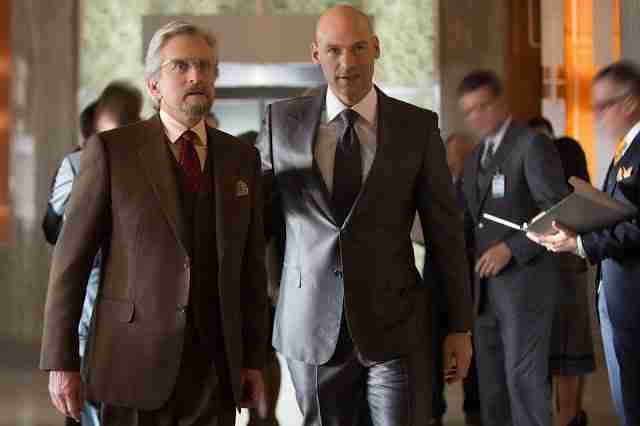 On his Co-Stars
I think the biggest surprise was Corey [Stoll].  Corey was a great heavy.  He was a great, great villain and he brought much more strength and dynamo than I ever had anticipated.  He had this whole subplot of me being his father figure and reaching out for my acceptance, which was haunting.  He played this and it had a real depth to it.  Paul, I knew from the beginning and he’s just as easy and wonderful as could be.  He’s lovely.  And then Evangeline, I did not know her range.  And so you go, ‘Wow’.  There’s no weak spots here.  Everybody’s solid.
On his favorite (and least favorite) scenes to shoot.
I know the ones I liked least.  Those were the heavy exposition.  I had to carry a lot of the exposition of plot in terms of explaining how things worked and everything.  You just got to kind of get a momentum going and try to articulate them.  Peyton [Reed], being such a good director was an actor earlier in his life and knew my lines better than I did.  That was a little intimidating because if I stumbled or flubbed, he actually knew these technical names where they got the ants names.
I enjoyed the Pym Technology scenes.  I enjoyed seeing this huge picture of me up there on the wall.  I was the founder of the company and just the beautiful work they did on creating that, the designs of that company.  Yeah. 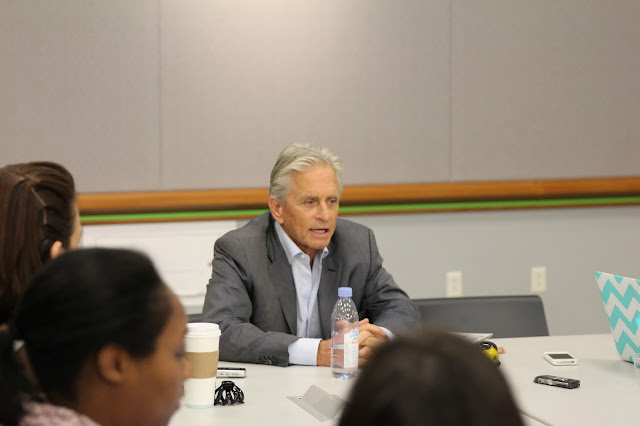 On being a part of “Marvel”
I was drinking the Kool Aid.  It was really interesting and fascinating to see the process, how it works.  Early on, when we first started, they were consumed with the Avengers coming out. We sort of felt like the orphaned kids for a while there.
But it’s a great family.  As far as your crew members are concerned, we were in Georgia in Atlanta at a new studio, and they were tied up for just about a year. And just as we got out of there, the new Captain America was coming in, and those same crew members are going to go on to Captain America.  So there’s a familiarity that brings a comfort factor and a relaxation.  These guys got a hell of a track record and they seem to know what they’re doing.  And so that combined with the talent you’re actually seeing around you makes you feel very secure. I’m happy to be part of the Marvel universe. I didn’t realize I had to get tattooed. 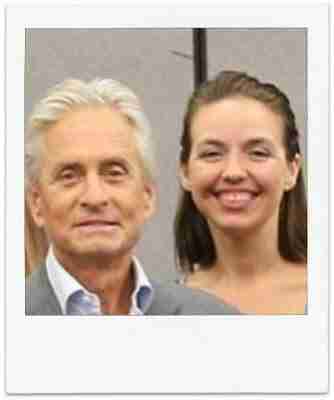 And once the interview was over, Michael Douglas totally asked me for a selfie. 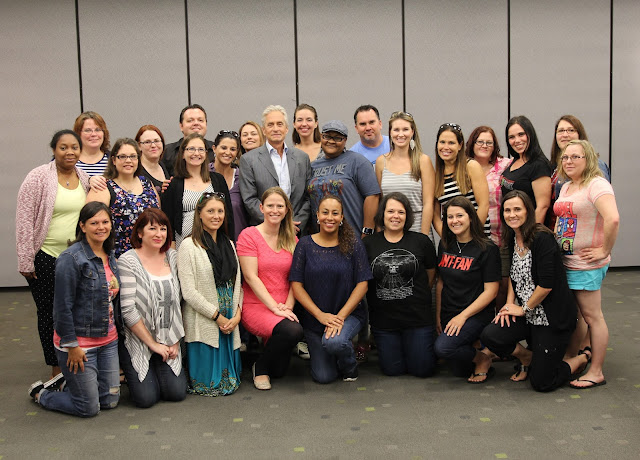 Or maybe I cropped us out of the group photo.  Regardless, I got to interview a legend that day and it was just as amazing as I thought it would be.

Disney provided me with an all expense paid trip to L.A. to attend the #AntManEvent in exchange for my coverage.  No other compensation is given and all opinions in my posts are 100% my own.  Disclosure Policy.

Michael Douglas is a big favorite actor of mine. This would have been an absolutely awesome time to interview him. And I love the selfie with him; great interview!