Do you have a kid that’s a hardcore fan of the Disney Channel’s Jessie?  I not only have one kid but I have a Son, Daughter and Niece that were totally bummed to hear Jessie was coming to an end this year.  I think my Niece took it the hardest, you see she had plans to marry Luke (Cameron Boyce).  Luckily, she can now see him on the very successful Disney Channel show Gamers Guide to Pretty Much Everything.  And for some of the other cast members?  Well, they all were happy to hear about the Jessie spin-off BUNK’D, which premieres this Friday, July 31st.  Here is a brief synopsis:
The kids, now CITs (Counselors In Training), must learn the ropes from the overly cheerful head counselor Lou and the camp heartthrob, Xander. Zuri makes new friends with two younger campers, the uptight Tiffany and compulsive fibber Jorge. The camp’s owner is Gladys and she’s even scarier than the legendary creature that’s rumored to stalk the grounds, and with help of her sneaky niece Hazel, she’s out to get the Ross kids because of her decades-old rivalry with their mom. Along with their new friends, Emma, Ravi and Zuri adapt to their new “home away from home” and settle into their exciting new lives at Camp Kikiwaka.

While in LA last month, myself and 24 other bloggers were able to visit the set of BUNK’D, meet the cast and watch a taping.  First off, let me tell you just how tedious these tapings are.  We were able to watch a small portion of it (one scene, in fact) but that one little scene was done over and over and over again.  I’m not so naive to think these shows are taped in one run through, from the first “Action” to “Cut!”  However, I had no idea how each little line and every movement were so critiqued.  How do these actors/actresses do it and not go bonkers? 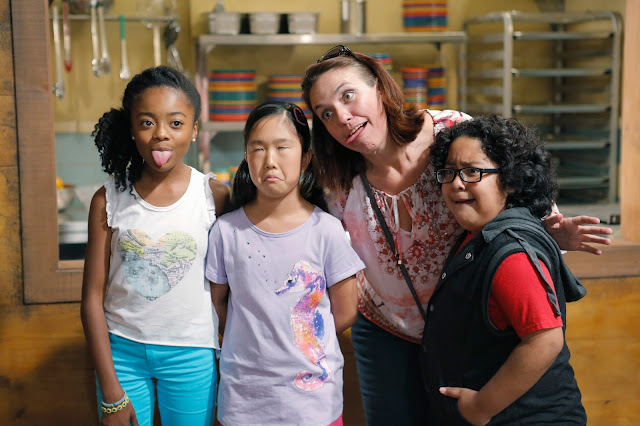 After we watched some of the taping, we were able to go on set and meet the cast.  We got to sit down and talk with them, learn a bit about life on set and take some pictures.  Skai Jackson [Zuri], Nina Lu [Tiffany] and Nathan Arenas [Jorge] just begged me to take a silly picture with them.  You believe me, right?!  It’s not like I have a habit of going around taking silly pictures.

Or maybe, I do?  OK, fine.  Yes, I totally asked each cast member to take a silly selfie with me and they were all sweet enough to play along.  Come on folks, why not?!  I was on the Disney Studio lot, sitting on set of a “soon to be” Disney hit (BUNK’D) and meeting the stars of said show.  It was such a fun moment and I was having a blast!

It was like my childhood dreams coming true.  Not only was I on set of a Disney Channel show but it’s a show about summer camp.  As a kid, I had always wanted to go off to camp for the summer but for some reason or another, it didn’t happen.  This might explain why to this day, I am not a camper.  I don’t like the dirt, bugs, heat or most things associated with camping.  However, there are things I miss about camping, such as eating s’mores and bonding with fellow campers as we sit around the fire singing Kumbayah.  Being on set that day, as I sat at the picnic table in the mess hall, it felt like I was 13 again about to start my first day at Camp Kikiwaka!

Even better, right outside the mess hall doors but still in the studio building, was the camp ground.  This is my kind of camping, I can be in the comforts of air conditioning, no dirt and/or bugs and internet access but experience all the fun camping has to offer.  Just give me a cabin to sleep in and… Oh look, they have one of those too!  Yes, I could totally camp here.

Watch BUNK’D on the Disney Channel, premiering Friday July 31st after the Descendants!
Disney provided me with an all expense paid trip to L.A. to attend the #AntManEvent in exchange for my coverage.  No other compensation is given and all opinions in my posts are 100% my own.  Disclosure Policy.
Share
Tweet
Pin
0 Shares

Hi my name is Chazzare Chatmon and I am 21 years old and I live here in Atlanta,Georgia and I am such a huge fan and supporter of Bunkd also I cant believe you got to actually go on set and meet the cast.I was wondering how were you able to get those tickets because I always tell my mom that I would love to come to a live taping of one of my favorite Disney Channel shows???Wow I didn't know all that took place such great information.I hope to hear back from you soon.

Hi! I did not receive tickets but I was able to visit the set as press and interview the stars of the show. They are wonderful! :)

Oh my goodness! Bunk'd is my kids FAVORITE show on Netflix that Disney has!! We were hooked on Jessie and then it ended, so we found out they made Bunk'd with some of the same characters, and our kids were just so excited. This is too cool that you got to meet the cast.

I loved reading this post, especially because it's one of their favorites. I will definitely be sharing this with them! It's hard to believe how many hours and re-takes the cast likely does to get through one episode, let alone an entire season.