Disney provided me with an all expense paid trip to L.A. to attend the #AntManEvent in exchange for my coverage.  No other compensation is given and all opinions in my posts are 100% my own.  Disclosure Policy. 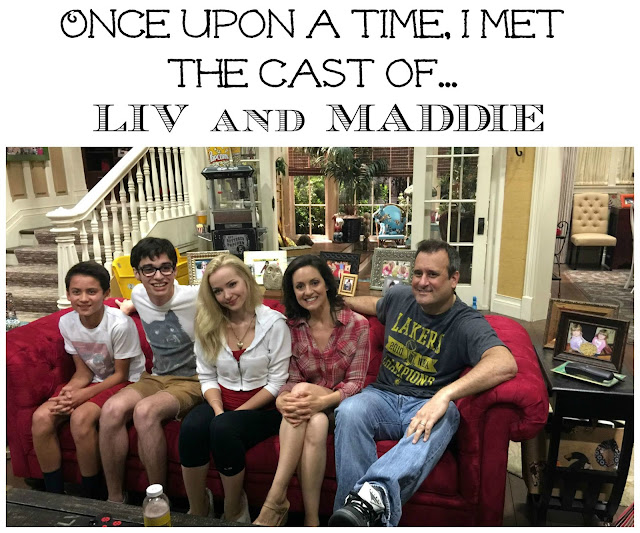 Once upon a time in LA a land far away, I had the chance to visit Disney Studio Lots an enchanted land occupied by the Walts of Disney.  In this enchanted land lived the cast of the legendary family known by the name of LIV and MADDIE.  LIV and MADDIE is a TV show on the Disney Channel famous story throughout the lands and is particularly followed by the young at heart villagers.  The show story centers around identical twins LIV, a former television actress originally from Wisconsin Never-land, who is looking to broaden her horizons and venture into the world of movies moving film and music.  Her twin sister Maddie, known for her athleticism and smarts, is recovering from a terrible knee injury spell which was cast upon her.  The young at heart villagers keep up with the family on TV their enchanted boxes and can look forward to the return on Sunday, August 16th at 9:00 EST.
LIV and MADDIE premieres on the Disney Channel Sunday, August 16th 9:00 EST.

OK, you got me.  This post is not an “enchanted fairy-tale story” but it is about the day I (and 24 other bloggers) got to interview the cast of LIV and MADDIE.  While it’s not a fairy-tale, many aspects of that day could have been taken right out of the pages of a fairy-tale book.  For instance, when we met Dove Cameron, the actress who plays both Liv and Maddie on the show.  As Dove walked on set to greet us, she reminded me of a beautiful princess.  You know how in fairy-tales when the beautiful maiden walks into the forest, starts singing and all of the animals flock to her?  Yep, that was Dove and she even had bunnies (slippers) following her!  She was beautiful, sweet, a bit shy and just as elegant as you would expect a fairy-tale princess would be.  She’s also a huge fan of the “fairy-tale” that is Disney…

“I think secretly Disney Channel is kind of the goal for every young Actor. You grow up watching it, it’s in your home.  It’s like when you walk into Disneyland and you see Mickey, and you go, is that really Mickey?  But maybe it is, you know?  I would still go to Disneyland, I would be with my boyfriend and I’ll say, ‘Let’s take pictures with the Characters.’  He’s like, ‘You’re almost 20.’ And I say, ‘OK Hon, I know but what if it’s really them?’“

Like all good fairy-tales, the beautiful princess has to be accompanied by a silly jester, right?  Well, LIV and MADDIE has two silly jesters younger brothers that are always stirring up trouble.  Tenzing Norgay Trainer who plays the youngest brother Parker and Joey Bragg who plays the middle brother Joey are the perfect jesters, I mean TV brothers.  Joey, especially lives up to his jester role, he is true comedic genius on and off the screen.  He had us all cracking up with the most witty zingers throughout the entire interview.  However, I do think he needs to work on the whole “juggling knives part” of being a jester.
“Second day of rehearsal, I stabbed her [Dove] in the face.
Oh I told everybody.  I didn’t tell her Lawyers.“

Of course, every good fairy-tale story has to include the “Evil Step Mother” and the “Over-Protective Father”;  Kali Rocha who plays Mom (Karen) and Benjamin King who plays Dad (Pete) fit that role.  Granted, I wouldn’t particularly label Kali and Benjamin as “evil” or “over-protective” but when both parents work at the High School you attend, you might think they are at times.  That’s right, the parents on LIV and MADDIE work at the very school the kids attend, which makes for an interesting twist to the show!  And how is it being a Mom and Dad on and off the set?
“We are a Mom and a Dad.  And a TV schedule is just so lovely for that whereas a Film or an Episodic, which is basically like shooting a Film, you’re gone around the clock.  So this has been a really nice experience for us to be able to incorporate our kids into this world and they watch the show.“

What does the ending of a fairy-tale call for?  A happy ending and the cast of LIV and MADDIE have LOTS to be happy about!  Going into the 3rd season of a very successful Disney Channel show is exactly what every fairy-tale character wishes for, right?  So catch the premiere this Sunday!
“SPARF-a-Rooney,” premieres Sunday, August 16, 2015 at 9pm on Disney Channel. In the episode, Maddie and Diggie try to “out-fun” each other at a local music festival as Liv tries to help Andie get over her breakup.
Share
Tweet
Pin
0 Shares
Guide For Geek Moms