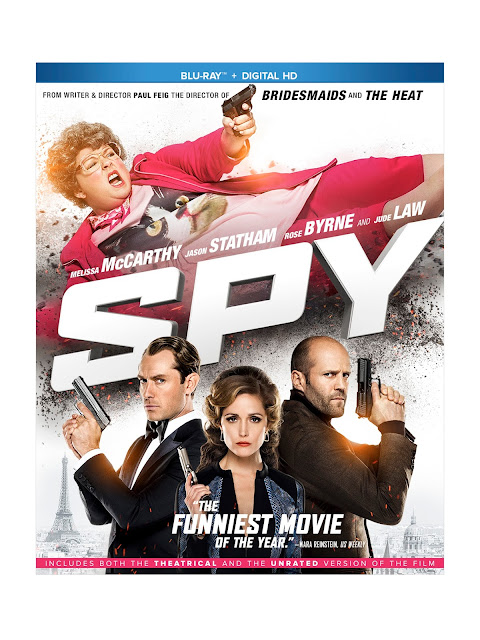 I had the opportunity to review Spy, which came out on Blu-Ray September 29th.  Now when I heard Melissa McCarthy was playing in another comedy, I knew I just had to see it!  At the time, life was crazy busy and I didn’t make it to the theaters. Monday, I open my mailbox to see I was sent a copy to review/giveaway.  I did a happy dance right there in my front yard!  Here is a bit of a synopsis of the movie:

Queen of Comedy Melissa McCarthy “in her funniest movie yet” (Leonard Maltin, LeonardMaltin.com) embarks on the mission of a lifetime as secret agent Susan Cooper in SPY. The September 29th Blu-ray release will include two versions of the film – Theatrical and never-before-seen Unrated Cut.  The DVD will feature the Theatrical version.  Both the Theatrical version and Unrated Cut of Spy will also be available on Digital HD September 4th.

McCarthy is armed and hilarious in this “outrageously entertaining” (Peter Travers, Rolling Stone) comedy hit from director Paul Feig (The Heat, Bridesmaids). Deskbound CIA analyst Susan Cooper is about to become the world’s newest — and unlikeliest — secret weapon. When her partner (Law) falls off the grid and another top agent (Statham) is compromised, Susan volunteers to go deep undercover and bring down a deadly arms dealer. Loaded with wise-cracking action and adventure, SPY is a mission impossible to resist!

Although this movie has a great cast (McCarthy and Law), truth be told, I was a little worried.  While McCarthy is a grade A comedic actress, the last movie I saw her in was Tammy and frankly, it was a flop.  SPY does reunite McCarthy with her Bridesmaid director Paul Feig, who also wrote the script, and it was exactly the breath of fresh air McCarthy needed to reclaim her “Queen of Comedy” role.  The movie was filled with hilarious-ness!  Seriously, it was that laugh out loud over and over again kind of movie that you will not want to miss.
In fact, you will want to own it!  The Blu-ray includes both a theatrical and unrated version.  While I watched the theatrical version, you can bet I am going to go back for some unrated action.  And bonus features, bonus features bonus features!  Number one reason to own the Blu-Ray is all about the bonus features!  SPY has 15 classified alternate scenes, 3 redacted scenes, featuring Jason Statham and outrageous performances by the rest of the cast, including Miranda Hart, Allison Janney, Bobby Cannavale, Peter Serafinowicz, and 50 Cent.

So what are you waiting for?  Own your copy of SPY today and have a laugh-tastic weekend!