Skip to Content
Share
Tweet
Pin
0 Shares
Disney provided me with an all expense paid trip to L.A. to attend the #LionGuardEvent in exchange for my coverage.  No other compensation is given and all opinions in my posts are 100% my own.  Disclosure Policy.

“Nants ingonyama bagithi baba”
If you don’t recognize the above lyric, you would know exactly where it came from if you heard it.  It is the African chant in the beginning of The Circle of Life from The Lion King and translated it means “Here comes a lion, Father.”  Well, now the lion gang is back but this time “Here comes a lion, Guard!”  That’s right, this Sunday 11/22 at 7PM/6c, Disney Channel will premiere The Lion Guard: Return of the Roar.  I was able to see an advanced screening and sit down for a Q&A with Executive Producer Ford Riley, Composer Christopher Willis, Singer/Songwriter Beau Black, Swahili Expert Sarah Mirza and Animal Expert Dr. Jill Mellen. 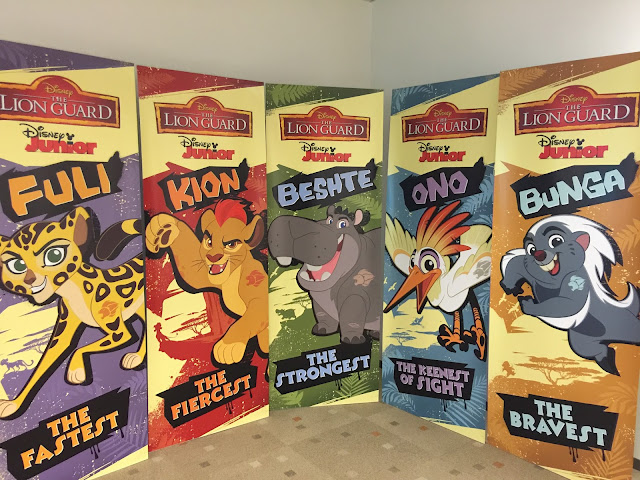 The Lion Guard: Return of the Roar brings viewers back to the rich world of one of Disney’s most beloved films, The Lion King. It introduces Simba’s son Kion, a fun-loving lion who’s more than happy that his sister Kiara is the one destined to rule the Pride Lands. Yet Kion soon learns he has a destiny of his own. As the Lion King’s second-born, it’s his duty to lead The Lion Guard, the team that protects the Pride Lands and defends the Circle of Life. As the leader, Kion has been given the Roar of the Elders, an amazing power that makes him the fiercest in all the Pride Lands.
Meet The Lion Guard
The Lion Guard is made up of 5 animals in the Pride Lands to protect the circle of life:
Kino (Max Charles) “The Fiercest” Lion and Leader of The Lion Guard.  He is the second born son to Simba (Rob Lowe) and Nala (Gabrielle Union).
Bunga (Joshua Rush), “The Bravest” Honey Badger.  Bunga is Kion’s best friend and partner in crime good.
Fuli (Diamond White), “The Fastest” Cheetah.  Of course we needed some girl power representation in The Guard and Fuli brings the speed!
Beshte (Dusan Brown) “The Strongest” Hippo.  An unlikely member of The Lion Guard but without his strength, it just wouldn’t be complete.
Ono (Atticus Shaffer), “The Keenest of Sight” Egret. The eyes of The Guard!
Although it may seem like an “odd” bunch which make up The Lion Guard, together they work as a an amazing team to overcome obstacles and protect the Pride Lands.  I totally loved the movie and your kids will too!  It will be a favorite for not only The Lion King fans out there but the super hero lovers, as well!  The show is inspired by Ford Riley’s son who would meet his friends weekly to play super-heroes in the park.  This gave Riley an idea, the idea that The Pride Lands was in need of it’s very own squad of heroes to protect the circle of life.  Thus, The Lion Guard was born!

Tidbits from the Q&A Session
Ford Riley caught his son playing with animals as super heroes and called them The Lion Guard.  This is the moment he knew he was on to something.
Beau Black: There will be a new song in every episode of The Lion Guard!
Christopher Willis: They used an African choir to help with a lot of the songs in the movie.
Sarah Mirza: This movie is not only entertaining for children but they can also learn another language (Swahili) in the process.
Dr. Jill Mellen: Funding for hyenas has dropped drastically since they were cast as “villains” in The Lion King.  Disney’s Animal Kingdom actually has two “really sweet” hyenas, so it was asked that The Lion Guard create at least one “good” hyena character. 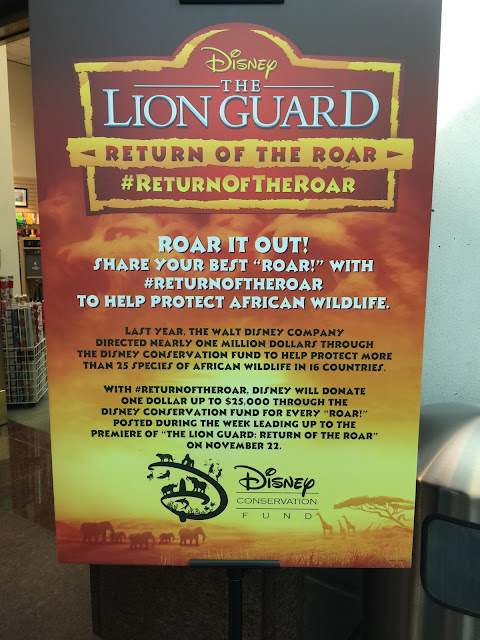 Help Protect African Wildlife with Roar It Out
Last year, the Walt Disney Company directed nearly 1 million dollars through the Disney Conservation fund to help protect more than 25 species of African wildlife in 16 countries.  They want to continue this contribution to an important cause and YOU can help with #ReturnOfTheRoar!  Disney will donate 1 dollar (up to $25,000) through the Disney Conservation fund for every “ROAR!”  All you have to do is share your roar during the week leading up to the premiere of The Lion Guard: Return of the Roar on November 22nd.  Simply give your best Lion Guard roar and post it using the hashtag #ReturnOfTheRoar.  Check out mine:

Tune in Sunday, November 22nd at 7PM/6c on the Disney Channel to watch the premiere of The Lion Guard: Return of the Roar!  It’s definitely a film for the entire family.  Also, this January will begin The Lion Guard series with 26 episodes already slotted.  Hevi Kabisa!
Share
Tweet
Pin
0 Shares