Disney provided me with an all expense paid trip to L.A. to attend the #GoodDinoEvent in exchange for my coverage.  No other compensation is given and all opinions in my posts are 100% my own.  Disclosure Policy.

The Good Dinosaur opens tomorrow November 25th, just in time for Thanksgiving!  While out in LA for the press junket, I had the opportunity to sit down with Director Peter Sohn and Producer Denise Ream for a Q&A round table session.
During these round table sessions with us Mom Bloggers, we’ve been known to applaud as the talent enters the room.  This particular day was no exception.  Peter Sohn and Denise Ream are extremely talented individuals and they deserve every single accolade that comes their way!  So applauding those achievements should be expected, however it never is. 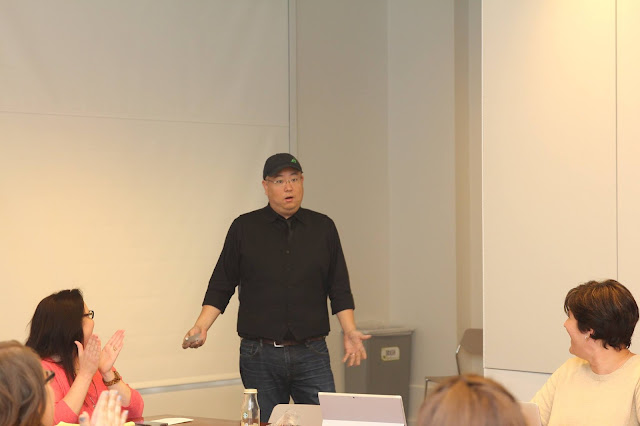 Just look at the surprise on Peter’s face!  He definitely was not expecting such a welcome but he deserves it and more.  The Good Dinosaur was such a great movie and I for one, am proud to be a tiny part of it!  To get a glimpse of the behind the scenes makings from the Director and Producer is definitely a special treat!.  Here is some highlights of that interview.

How did Peter become a part of this film?
What’s interesting was this show was pitched by original director Bob Peterson in 2009 and then he asked me to come help develop the project. During the development I was doing story and designs for him and then he asked me to be his co-director. From that we were trying to wrestle the story and it was tough. A lot of these Pixar films go through that kind of place where you put every answer and you go in every direction. We had the boy and the dog story. We had a father-son story. We had a trying to change community story and then it was hard to kind of end it all.
They asked me to become the director from there because I had known all the paths that we have gone through and I basically, simplified it to Bob’s original pitch. I love Bob and he’s a great friend and I just loved that original idea. It was really Bob who got me developing into that co-director position. To your point, I learned a lot from working with the other departments, too. That’s nothing like the director job. There’s so much I didn’t know.
I was scared and Denise Ream, our producer, surrounded me with a lot of experienced people to help out with that. Everyone was just like ‘Here’s our hearts. Let’s do it.” 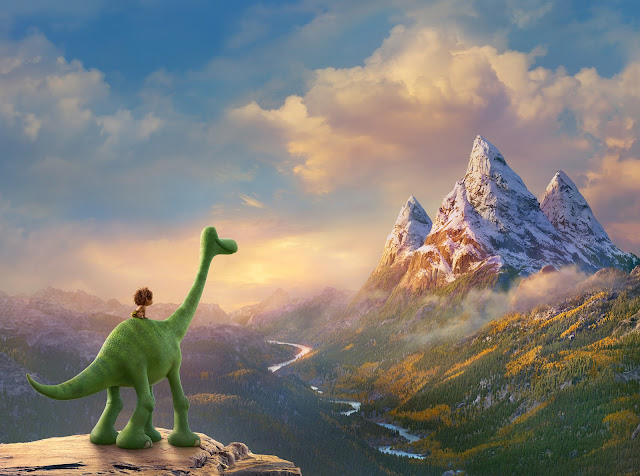 The Technology Used In Creating The Good Dinosaur
It’s not new technology, but we ended up basically using Google maps to create a lot of the locations. It’s called USGS topological survey maps. We started with that and got us a long ways toward kind of getting the big scope that we wanted. Then the trick was populating that terrain with the trees that we had modeled, the leaves, the mulch, the rocks, all of the vegetation.

On The Western Influence
I grew up on the Western and it’s all I did was watch these movies. Shane was one of my favorite movies and in the opening of that film was this farm in front of the Teton Valley. It was the Grand Tetons and I was like let’s go there. And so that’s where we started everything.  And then it was lucky that there was a Snake River that went through there that we were like oh, my goodness, this is exactly what we need for this story. And so the whole idea like when you go out there all you ever think about is how did people survive out here? How did they get across these mountains with nothing? How did they do that?
All the research that we would do in meeting farmers and ranchers out there it hit me so hard that these were the same types of families surviving but on thousands of acres each member of that family was an integral part for the survival of that thing. It was a universal thing all of a sudden like, oh, my God I totally connected. Look at these people. They’re living and working together and up here in this really beautiful yet tough landscape. So it was really inspiring for us to try and say you know what, let’s have our little dinosaur, be a part of this family and he already feels like he can’t contribute. I want to. Everyone has to do something for the survival of the family. And so a lot of the Western movies are about survival.