Skip to Content
Share
Tweet
Pin296
296 Shares
Disney provided me with an all expense paid trip to L.A. to attend the #ABCTVEvent in exchange for my coverage.  No other compensation is given and all opinions in my posts are 100% my own.  Disclosure Policy.
I’ve decided, I am moving.  You see, last month while I was in Los Angeles for a press junket, I had the opportunity to visit the set of the hit TV series Blackish.  Blackish airs on ABC Wednesday evenings 9:30/8:30c and stars Anthony Anderson and Tracee Ellis Ross.  Now if you remember my post from last week, I met Tracee Ellis Ross while on set and she actually gave us a private a tour!  It was such an incredible experience, one I will never forget.
Now the question remains, where I am moving?  To the Black-ish set, of course!  I hope they have room for me because I have totally packed my bags and told the kids!  We are ready; lets hope the cast, crew and producers are ready for us.   Let me take you on a little tour of my new home!
The most important room in any home is the bedroom, for me anyways.  My bedroom is my haven and if I could, I would never get out of bed!  I think the Master bedroom on the Black-ish set will do!  Even though the roof has holes in it, where the set lighting and cameras are placed, I could get a very restful sleep in that bed!
And I will ignore all “keep off of furniture” signs, just like Tracee Ellis Ross does!
Take a look at the closet attached to the Black-ish my bedroom!  To heck with living on the set, I could live in this closet!  I hope it also comes with a new wardrobe.
Finally!!!  A closet that just might fit all of my shoes.  I told my husband that I don’t need to get rid of my shoes, I just need a bigger home.  Time to make room for me Dre, clear out those shoes because I’m moving in!
Now we do have to do a few adjustments to my new home.  While the bathroom off the Master bedroom is awesome, I’m just not sure how I feel about the roof being missing from it.  How am I suppose to relax in my bubble bath staring up at all the cameras and lights?
The kids have even called dibs on their rooms.  I knew my little girl would opt for the room with a flower mural on the wall!
And the kitchen, oh the kitchen! I could totally see myself cooking in this kitchen, it is like a dream!
Just look at that stove!  Oh yes, I am going to like my new home. 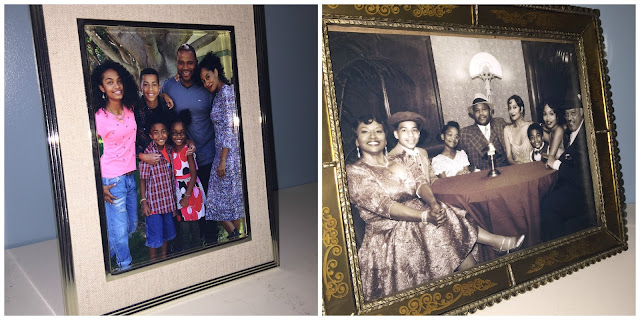 I do have a question for my readers out there.  Does anyone have some mad Photoshop skills?  The reason being is, I’m loving all the Johnson family photos around the set; I do not want to get rid of them when I move in!  However, I do believe they need a little touch up; like my face cropped into them!  Don’t you agree?

You can use these pictures of me on set!  Now excuse me as I get back to packing.  You can get an up close and personal view of my home tonight on Black-ish on ABC!
Disclaimer: As much as it did seem like a dream, I was on the Black-ish set and received a tour from Tracee Ellis Ross!  However, I am not actually moving to the set of Black-ish, it was part of the satire!
Tonight’s Episode:
POPS AND RUBY TRY TO SHOW THE KIDS THE TRUE MEANING OF CHRISTMAS BY PARING DOWN GIFTS AND SPENDING MORE TIME TOGETHER, AND DAPHNE LIDO INVITES HERSELF OVER TO CELEBRATE WITH THE JOHNSONS, ON ABC’S “black-ish”
Dre thinks Christmas has become commercialized and is all about “stuff,” and no one loves “stuff” more than his kids. Pops and Ruby think they have forgotten the true meaning of Christmas and come up with a new plan to pare down gifts and spend more time together. The kids don’t handle the news well and hope that if they put on their best behavior Dre and Bow will cave in. Meanwhile, Daphne Lido (played by Wanda Sykes), who is single for her first holiday alone, invites herself to the Johnson family home to celebrate with them, on “black-ish,” WEDNESDAY, DECEMBER 9 (9:31-10:00 p.m., ET) on the ABC Television Network.
Facebook: https://www.facebook.com/blackishABC
Twitter: @black-ish
Hashtag: ‪#‎blackish‬
Share
Tweet
Pin296
296 Shares
Guide For Geek Moms