Skip to Content
Share
Tweet2
Pin
2 Shares
Disney provided me with an all expense paid trip to L.A. to attend the #Grandfathered in exchange for my coverage.  No other compensation is given and all opinions in my posts are 100% my own.  Disclosure Policy.
Grandfathered airs Tuesday nights on FOX 8:30 EST.
I’ve been a fan of John Stamos since way, way back when he was on that one show.  You know, that show where he played an Uncle or something.  I even met him once, I am sure he remembers, when I was around 13.  I attended a semi-private Beach Boys concert and he made an appearance, playing a bit on the drums.  I remembered him as handsome, talented and an extremely nice guy.  When I heard we were going to meet him on the set of his new show Grandfathered AND interview the entire cast, I was thrilled!

As we made our way on set, I lagged behind the group a bit.  I wanted to take it all in, from the fun decor to the staged pictures; it’s always amazing to be on set and see every detail that is put into the show.
All of a sudden I hear his voice as we were making our way towards the interview area, “Hello ladies!”  Oh my goodness, it’s John Stamos walking up right behind me!  He puts his arms around me and another blogger and I go weak in the knees.  John Stamos had just given me a hug!  Forget the interviews, I wanted to stay right there in John’s arm’s arm.  But I guess we had to leave that precious moment of ours and get down to business.
Inside Scoop from the GrandFathered Interviews
We first sat down with Josh Peck and Cristina Milian, who plays Gerald and Vanessa on the show.  Gerald is the product of a one night stand who has a huge crush on his baby mama, Vanessa.  Like Vanessa on the show, Cristina is also a single mom in her real life and understands the challenges of parenthood!  Her character on the show resonated with me the most, from her social media saavy ways to her connection with her daughter; she is the new aged mom!  Josh is also much like his character Gerald, having a very close relationship with his own single mom.  The two were so down to earth and a pleasure to talk with!
Next up were Kelly Jenrette and Ravi Patel who play Annelise and Ravi on the show.  You can tell both of them love the show themselves and are happy to come to set each day.  In fact, when Kelly first read the script she did a slow clap.
Ravi was very excited to talk about a side project he is working on with some other celebrities to help fight hunger.  For every This Bar Saves Lives you buy, the nonprofit organization donates a pack of food to those in need.  It is not only delicious but also gives back!

Last but not least, we sat down with John Stamos and Paget Brewster who plays Jimmy and Sara.  One thing I found interesting was when Paget spoke about the stigma in playing the grandmother role.  Some actresses worry that once you play that grandmother role, you will not get cast for other types of roles.  She has been lucky enough not to come across that but also didn’t expect to get this current role.  She thought they would hire a hot model to play Sara.  John was firmly against this, he wanted Sara’s role to be a very strong, female character and that is what he found in Paget.  You could tell their friendship off set is just as strong as the chemistry they have on set.  The true making of a hit TV series!

John was just as nice and handsome as I remember.  He talked about how his family, his father in particular, has kept him “down to earth” all these years.  Even when he received his first big acting job, John’s father wouldn’t let him get a “big head” and made him continue to work at the family’s fast food restaurant.  John is so nice in fact, he emailed every single blogger after the interviews!  Yep, I received an email from THE John Stamos! 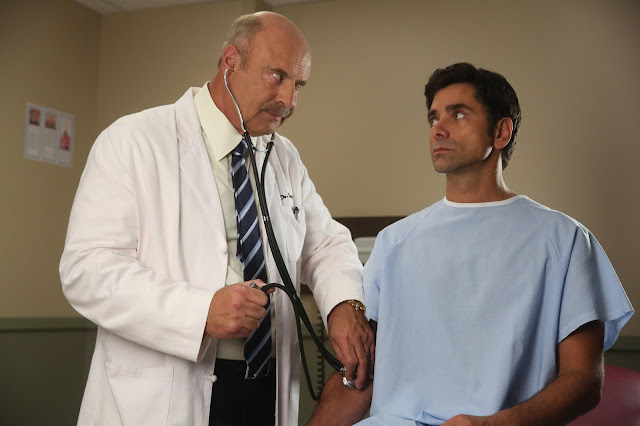