Talk about an action-packed joy ride — and that was just the interview with Ratchet & Clank Director Kevin Munroe and voice actors James Arnold Taylor (Ratchet) and Bella Thorne (Cora)!
It is always a fun and unique experience talking to anyone involved in the making of a film because you get to hear the ‘behind-the-scenes’ stuff that you may otherwise never really hear about. You get to learn about what makes someone tick, where the whole creative process begins and how it develops, and basically, what makes making a movie like this so much fun!
At the most recent press event for Ratchet & Clank, where we interviewed Kevin, James, and Bella, we got to learn quite a bit about the making of the film, but also got a fun glimpse into each of their lives. We all left the interview in stitches, which is always a good thing when you have actors/actresses that are so easy to talk to.

Here are a few highlights of our interview for Ratchet & Clank
There were some really great questions asked, and equally interesting answers (see below), but I think this quote from Director Kevin Munroe perfectly sums up the overall theme of the interview, “It’s all about the story. It doesn’t matter if it is a game, or a movie, or a TV show. It’s all about just experiencing — like even on your phone you can just experience a story anywhere.”

Ratchet & Clank Interview with Director Kevin Munroe
Question: I thought the music was groovy. Can you talk about the music and score?
Director Kevin Munroe: The score was great because, Evan Wise was the composer, it was his first film that was fully composed and it was fantastic. It was never about experience, it was about do you want it and do you have something to say?
It was a crazy journey because the movie has so many elements in terms of comedy and action and how to balance all that. You’re mixing a lot of tones so you need something I think that really ties everything together, and to me it was the music was a chance to really do that.
He really worked on this funny thing that was sort of a Looney Tunes kind of vibe where we’d have a joke and then the score would go ta-toot-ta-toot, like you know.. it’s funny!
Q: What inspired you to write Ratchet & Clank and what is the biggest challenge making the movie?
D: TJ Fixman had a fantastic first draft (he worked in the video games for over 10 years), and my job was to come in and find the movie we were telling within that, because there were all these other stories where we met his dad at one point. That is a great storyline, but it is its own movie, you know, and so if you’ve seen the movie — there is already enough in there.
The biggest challenge was taking something so big and figuring out what the story is that we wanted to tell. We wanted to tell how Ratchet & Clank met and how they got to become the heroes of the galaxy. Hopefully if everything goes well we get to tell a whole bunch more stories.
Q: Did you envision the actors that did the voices?
D: You know it’s funny, especially with animation, I don’t like to fall prey to the whole ‘we need to get a name actor in there’, to me it’s always just about the character. It was very simple with the characters that were already in the franchise, and when it came to the new characters we just created a character type. The entire casting process was always about ‘do they service the character?’
Q: It seems like many of the video game movies lately have been driven by the video game studios and not Hollywood. Do you find that makes them more successful?
D: I think it gives an incredible chance to make the movie strong. Especially in animation, I just love to hear a voice, or a POV. A lot of times you get like a factory output like in another/ bigger studio where they just take the property and make a movie and doesn’t really pertain to what it was that drove it to us in the first place.
We had a really great situation with Insomniac Games because they obviously care a lot. A lot of video game companies are notoriously protective of their children, right. And they really hold on tight, which is great, that’s what you want. There are other companies where that ‘mommy squeeze’ is almost too tight, like you’re gonna kill ‘em!
With this it was a great balance because Insomniac knew where we wanted to go with it, and it was just about supporting it. To me it was just about not reinventing the things that already worked. Let’s just make it look like the movie version of the game. It gives smart producers and smart studios a chance to get a really unique vision on screen by co-opting in the video game. 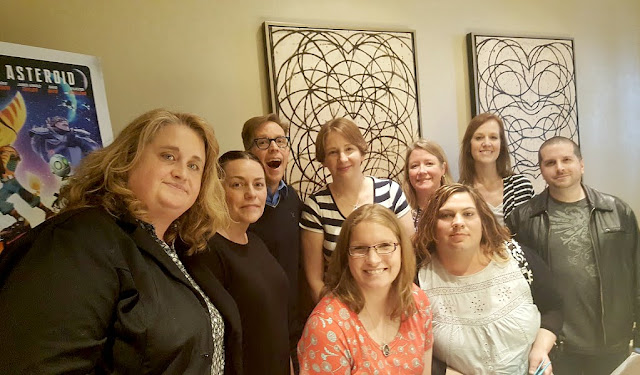 Ratchet & Clank Interview with Bella Thorne, James Arnold Taylor, and  Director Kevin Munroe
Q: I enjoyed your live-stream on Thursday where you were encouraging people to follow their dreams, and I noticed that was a theme in Ratchet and Clank a lot too.
James: I think so too, I think it is pretty awesome you know. It is this wonderful thing of the underdog you know, and I kinda look at myself that way too as I’ve always wanted to do these things and it’s been my dream to be a voice actor since I was 4yrs old. Here we are now with this and I get to have my name on a poster with Bella Thorne and that’s pretty darn cool. Dream Achieved!
Q: Ratchet and Clank is such a playful project, what was the most fun part of doing the voices (to Bella and James)?
Bella: The snacks.
James: You got better snacks than I did though.
Bella: You know I did.
Bella: The most fun about playing it was playing a badass female chic that was super cool. When I walked in you guys [directors] were like ‘you can just use your dark voice’
Kevin: She was like, “you sure you don’t want me to sound more girly?” We were like, No!
Bella: No, No, No…Deeper! The most fun part was getting to stress my personality. 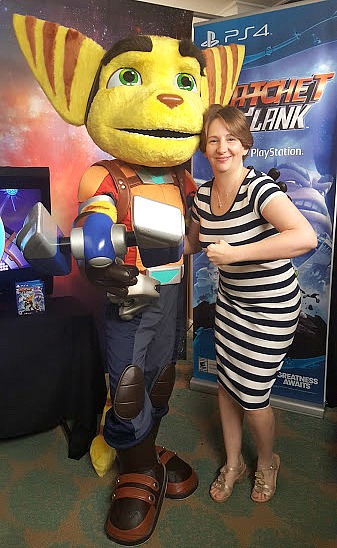 Q: How do you identify with your character?
Bella: Pretty much in every aspect. Super tom-boy. You can’t tell in the way I dress, but in my personal life I definitely wear what she’s wearing in the movie. She’s not afraid to boss Ratchet around.
James: Yeah, this is true. In real life too.
Bella: At the end of the day she shoots first and asks questions later, but wants what’s best for the team.
James: I get to be a voice actor because I can be superheros and stuff, it is just a great combination of life and un-reality.
Q: As a lifelong gamer, I really appreciated all the hat tips to the gamers that you put in the movie. Especially the Sly Cooper bit, any chance we’ll see him in a starring role soon?
Kevin: Hey, there we go, right? No. I would hope so. I know it’s there. It hasn’t gone away. I just hasn’t really moved forward, I think. And I think a lot of it depends on how this does, and yeah – because it’s a model. I get it. I get that we’re going in and we’re saying we can take really successful video games, and tell really compelling stories that want to go to the theater and see, like the filming version of it. So – we’re all ready to go. I think it’s just a matter of just waiting until someone says, “Yeah, we’re doing it.”
Bella: It’s just a matter of how many of you guys buy tickets. Right.
Kevin: There you go. But yeah, no – everyone’s really jazzed to get into it. So – yeah.
Ratchet & Clank Opens in theaters April 29th, until then, enjoy this awesome trailer!
Share98
Tweet7
Pin
105 Shares

I think you should make a video about this on YouTube...

[…]  Earlier this year, I sent a contributor out to Los Angeles to pre-screen Ratchet and Clank and interview the stars of the film!  After reading her review, I was a bit jealous she was able to screen the movie early!  It […]