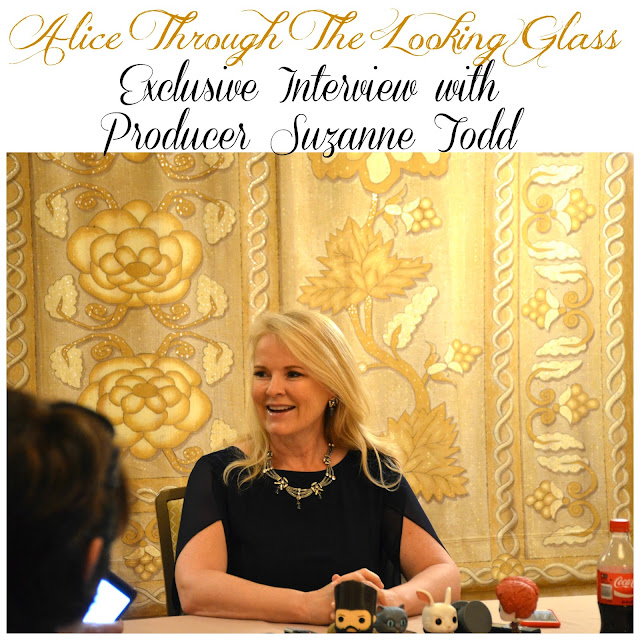 Suzanne Todd is a well-established Producer with hits such as Memento, Austin Powers in Goldmember & the 2010’s Alice in Wonderland under her belt. Last week I had the opportunity to interview her to discuss her newest project Alice Through The Looking Glass, NOW in theaters across the nation.
Suzanne walked into the room with the grace and confidence you would expect from someone with 30 years of experience under their belt. She commanded the room and before she took her seat, she began telling us a story. A very good friend of Suzanne’s, Maria Shriver, recently celebrated her 60th birthday and instead of asking for gifts, she asked that guests/friends donate to her charity “Move for Minds”, a charity focusing on helping individuals with Alzheimer’s disease. So of course Suzanne took part in raising money for Maria, even taking to social media to request donations. Donations began pouring in from friends, family members and colleagues but one particular donation touched her heart. The donation was from stranger and was made in honor of the individuals grandmother. After doing a little research, Suzanne discovered this person was going to attend the press junket and was in fact one of the fellow bloggers in attendance. Keri from She Saved announced herself as the individual Suzanne was speaking of and the room erupted in cheers; I have to admit, I had tears in my eyes. Good deeds never go unrecognized and this was proof of that. Suzanne wanted to repay the kind gesture and presented Keri with a box that contained the most beautiful pair of Alice and Wonderland shoes. More cheers erupted in the room. This my friends goes to show you the incredible person Suzanne Todd is, such a genuine spirit.
It took us a minute to recoup after witnessing such a kind act, but we managed to do so and the questions flowed from there. Here are some of the highlights from the interview:
On The Making of Alice Through The Looking Glass
My friend, the writer Linda Woolverton, had come to me with the idea of making a movie where the girl could be the hero, be the heroine, and that was so exciting to me. It was very, very difficult to craft the sequel. We had never intended to make a sequel. We didn’t rush to make a sequel like to just cash in on the financial success of the first one. We wanted to be really thoughtful about it. So I think that was always at the core of it, to be true to Alice’s story, to be true to the Lewis Carroll Alice. We really wanted to focus on time. I have three kids. You guys here are all working triple duty as all moms do, and I just feel like the older I get, the more precious I find my time is to me. So that for us was really important. The idea of being able to put a movie out there that is a kind of we girls can do anything movie, for my little girl who is 11 now, and also just recognizing, time is so precious to all of us.

Was Alice Through The Looking Glass Easier or Tougher To Make Than The Original?
In a way, I think it was harder because the response to the first film was kind of unexpected and overwhelming. There’s all this pressure that you want to do something always with movies that will be commercially viable, because that’s why you get to make more movies, but you also want to do something that says something that’s important to you. For me with the three kids, the older I get, the less I want to ever do a movie that doesn’t feed my soul. You don’t want to do those movies that you’re just kind of doing because you need to, if you don’t have to.
We built big sets on the second one, and getting the cast together was much harder on the second one because they’ve all continued to have flourishing, amazing careers. Anne [Hathaway] has won an Oscar since then, they’ve all done so many amazing things and Johnny’s always booked.
Suzanne’s Advice To Other Single Moms In Pursuit Of Their Career
I’m learning every day just like the rest of you. I think however many years it is down the road for me now, I know it sounds like an Instagram saying, but I definitely sweat the small stuff less. I feel like in my old life, I definitely sweated it more. Maybe that’s because I don’t have time for it, or the energy for it, but situations, people, things that bring drama and conflict and aren’t productive moving forward things, I really stay away from or avoid. I will cross the street to get away from.
On The Struggles Being A Female In Hollywood
Unfortunately, there are very few female directors and female producers. I’ve been doing it literally 30 years now, and it hasn’t really changed very much. I wish that it had changed more, it’s certainly taken smalls forward, but it’s not like it’s hugely different, it is very difficult. I’d like to lie and say “Oh no, that’s not true at all.” but it’s true. It’s harder as a woman.
How Alice Relates to Suzanne On A Personal Level.
There’s sort of a running joke from the two movies, because I work with my younger sister who happens to have red hair. So in the first movie, there was a Red Queen, White Queen sort of joke. The White Queen (being Suzanne) is the good one and Red Queen is the bad one. Although you may have thought that in the first movie, certainly in the second movie, you get to see it. There is something about that sister story line, because I have two sisters, that’s very special for me.