Skip to Content
Share75
Tweet
Pin1
76 Shares
Disclosure: I was provided an all expense paid trip in order to facilitate this interview.
Earlier this month I flew to Portland, Oregon to visit the set of KUBO and the Two Strings, opening August 19th, at the stop-motion animation studio LAIKA.  LAIKA was founded in 2005 and has made it’s own distinctive niche in the movie industry by continuously expanding boundaries in the stop-motion animation world.  After taking a tour of the set and speaking with costumes designers, puppet makers, set directors and countless others at LAIKA (posts on these interviews to come), I can see why they’ve put out quality films.  The Oscar nominated Coraline was the first film to come out of LAIKA in 2009, followed by ParaNorman and The Boxtrolls.  Now the 4th film, KUBO and the Two Strings is set to release this August and goes above and beyond anything LAIKA has done before.
While at LAIKA, I had the opportunity to interview LAIKA CEO and head animator, Travis Knight.  For the first time ever, Travis steps beyond the animator role into the directors chair in KUBO and the Two Strings.  Also attending the interview was Producer Arianne Sutner.  Arianne has a long history in the entertainment industry producing TV shows and movies since the early 1990’s and was even part of LAIKA’s ParaNorman.
My first impression of both Arianne and Travis was their drive and passion.  You could tell both were extremely proud to not only be a part of LAIKA but to put out a ground breaking film such as KUBO and the Two Strings.  Here are some of the highlights of the interview: 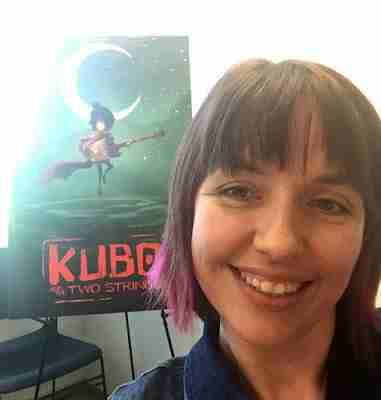 On Beginning the KUBO and the Two Strings Project
Knight: We started developing the film 5 years ago, we were still working on ParaNorman at the time.  We want our films to look and feel different from each other and we wanted to explore different ideas and different themes.  With KUBO, it was our opportunity to take on a big fantasy epic, which is something that has never been told in stop motion before.  For a variety of reasons, stop motion films tend to look like they are shot on a table top because that is basically how they are.  It’s a sheet of wood and some props and it is shot on a tripod.  We always have wanted to take the medium to where it has never been before.  I love samurai films growing up and this was an opportunity to take all these things, these childhood obsessions I’ve had as a kid like Star Wars and Greek mythology, and bind them together to make this incredible thing.
On The Budget of a Stop-Motion Film
Knight: If you took the budget of all of our first three film budgets together, it wouldn’t add up to one Pixar budget.  So we really have a fraction of the budget that the big studios have but we do more with less.  Our crew of animators is about 20-25 people.  On ParaNorman, as an animator I shot 20-25 minutes of animation just on my own.  So we do a lot more with a lot less.  It’s still a big crew and you always have to be mindful.  It’s not all about being economical because you want to tell the best story in the best way.  You can do that in ways to be seen on the big screen and you can do that in All along the way in stop-motion, it requires considerable discipline.  You can’t shoot anything more than what you need in the movie.  And so you go through this process earlier on where you have to decide exactly what you need to build, in terms of puppets, in terms of sets.  We don’t want to waste a frame, if we spend time on something that is not going into the movie, that is wasted effort.  So we are very disciplined in our process, in our script writing, in our story boarding.  And when it comes down to bringing the teams together for the actual shoot, that is when you start burning money.  We have to make sure we do enough before that process starts to make sure that money goes to the screen. 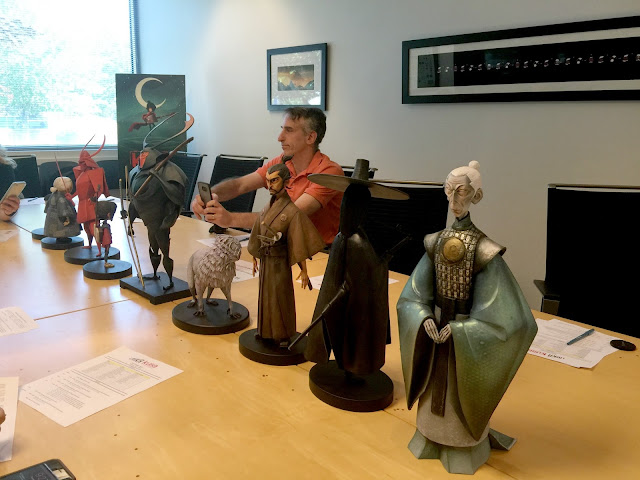 On The Process of Voice-Overs
Knight: In some ways, the fundamental process of working on CG film or stop-motion film, a lot of those things are analogous to each other.  In a film that is rooted in dialogue, you have to have the dialogue/voice first.  So while we are writing, while we are story-boarding, we start thinking about the cast.  Before we shoot a frame of film, we have already cast all of our lead actors and most of our secondary and tertiary characters as well.  An actor will bring a lot of their own invention to the process.  That is the thing about collaborating with artists, they will bring their own interpretation to the process and it just becomes richer.  So with voice acting, we begin that early in the process to nail those characters.  We do 4-6 sessions over the course of a year and half.  When you deal with a child actor, that perfect age where they have that perfect voice, if you don’t capture that very quickly, it’s going to change quickly.  We recorded KUBO in a rapid 6 month session and by the end, he could not do the KUBO voice anymore.  His voice was deeper than mine!
Sutner: And ad-libbing definitely happens when a great actor really gets into their role and has lived with it for awhile.  What I’ve noticed is that Travis, when he wants to do their own take he will do it and see if that works with the script.  And sometimes that will bring something to his mind, it might spark something or give him an idea.
Knight: When you have a moment of spontaneity in the recording booth and it really feels authentic, that is something that is rich and you try to hang on to those moments that feel natural.  Often times you so wind that stuff into the script if it works.  There is some great things you capture, Matthew McConaughey would have these 15 minute off the script moments when you are sitting there and it is all really funny-good stuff but the movie would be 5 hours long if you kept it all. 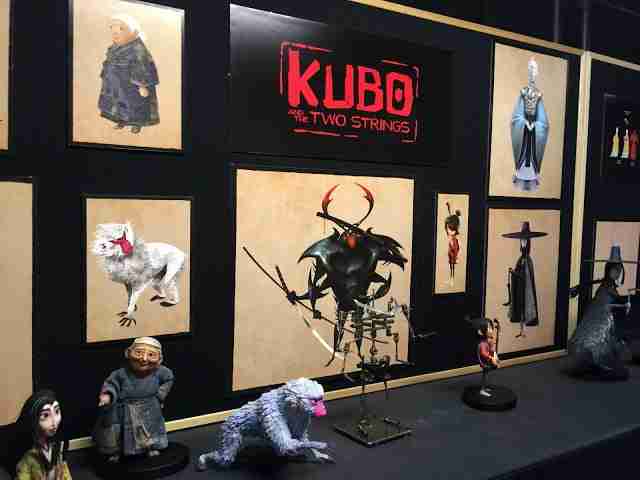 Typical Day At Work For An Animator
Knight: It’s pretty tedious.  Our animators produce about 4-5 seconds of footage that we can use in the film per week.  So when you think about it, that doesn’t seem like a lot.  But that is a lot of activity.  Before an animator can shoot something, we set up the shot, we know how everything is going to go, we have the story board, we have camera plans and everything.  So we set up the shot and I will brief the animator and say “OK, this is what I’m looking for.”  Before that we talk with the facial animator teams, we know what the expressions are going to be.  So weeks and weeks, if not months of work has gone into the shoot before the animator even steps foot on the set and they have everything prepped for them, they have the lighting.  The teams have set up everything perfectly, we have all the props set up on the spot, if the character has to run or jump we have a rigging department that helps the character fly.  The animator will then go into the shot and depending on the complexity of the shot, the animator will basically move the puppet into space roughly to determine the move of the character or they will do a rehearsal which is essentially the shot that you see in the movie quickly/roughly done.  An animator will spend hours, even weeks on a rehearsal and if that is good, then the director will then launch them on the shot.  They come in the morning, they go into their unit and sit all day and go home at night.  They have very minimal human contact unless a light goes out or a puppet breaks.
Sutner: They do get a lot of director time.  A good director will tell them marks they have to hit or what they want for a particular scene.  In a perfect world, we hope we set up enough time to practice with their supervisors and get to know them, get to know their character and really study their scenes.  They also really listen to the voice to help act out the scenes and to understand who that character is.
Knight: You are really acting through a doll.  Basically trying to bring to life and evoke emotion.  Forget this is steel, silicon and cloth; this is hopes and dreams and aspirations.  If you can do that, if you can transcend the doll and make people feel like this is a living, breathing thing; to me that is one of the most magical things there is.  A human being has brought this inanimate thing to life, it’s extraordinary.  I’ve been doing this for 28 years and I still think it’s unbelievable. 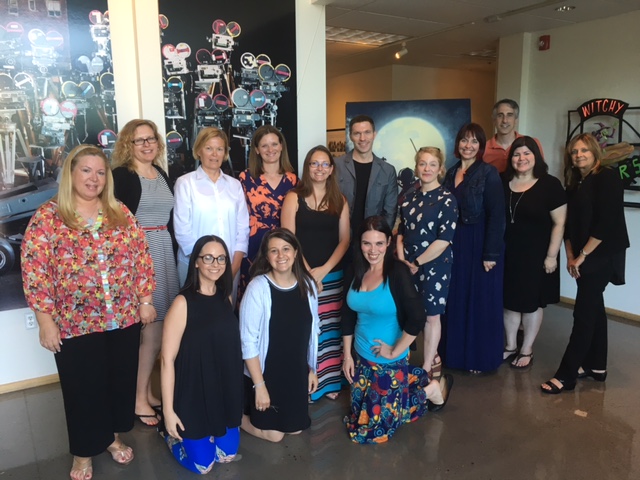 The Take Away of KUBO and the Two String
Knight: At it’s core, it really is a story about human relationships and effectively, this family.  From my perspective, this film is about a boy and his mom; it’s about me and my mom.  It’s the core relationships between a parent and their child and that is really what the core of this movie is.  It’s that point in time from childhood to adulthood and the lessons we gain and the things we leave behind on the way. 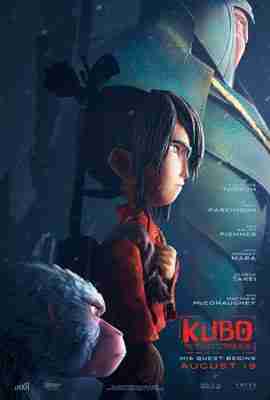 […]  In June I visited LAIKA Studios, where KUBO and the Two Strings was filmed, I got to interview CEO/Director Travis Knight and tour the facility!  This month in LA, I will interview talent Matthew McConaughey and Charlize […]