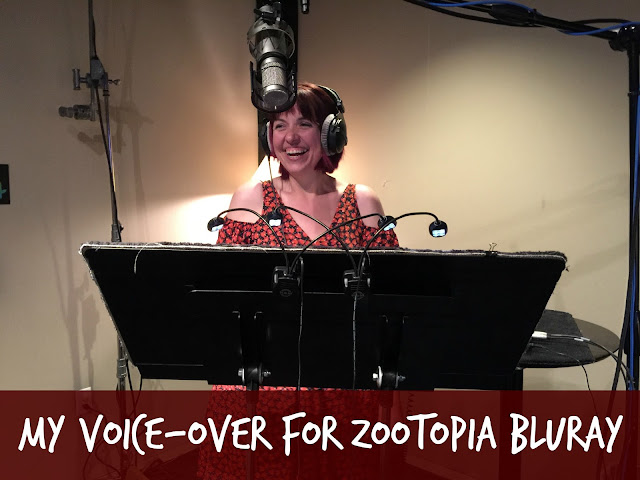 Zootopia is NOW on Bluray/DVD!
When Disney offers you the chance to do a voice-over for one of their films, you JUMP on it.  When you find out the voiceover is for Zootopia, which just crossed the billion dollar mark, you bring your A-Game!  And when you get to pick the character you want to voice in the clip, you pick the biggest, baddest Zootopia character of them all; Mr. Big!

I have to admit, I was a bit nervous when I first walked into the recording studio.  I was greeted by Paul McGrath, a Dialogue Mixer at Walt Disney Animation Studios, and given the run down of how everything works.  One question that was asked to Paul is if he’s ever heard a voice in public and thought it needs to be recorded.  He says, “The Casting Department is always looking talent and listening for new voices. So, yeah. Usually what happens is there’s a general meeting with an Agent and an audition will come in.”  Good to know, good to know!

It was showtime!  If walking into the recording studio wasn’t daunting enough, getting behind that microphone sure was!  Paul played a clip (with sound) on the monitor in front of me and I was to follow along afterwards.  I did.  And It. Was. Hilarious!

I think I have a future in voice-over work! #zootopiabluray #ThroughTheLookingGlassEvent
A video posted by Amanda Taylor (@mandipie4u) on May 24, 2016 at 11:37am PDT

Above is a clip taken during my session, hand gestures and all!
And here is the clip after Paul worked his magic.  I think I have a career in voice-overs in my future!  What do you think?
Go grab your DVD/Bluray copy of Zootopia Today!