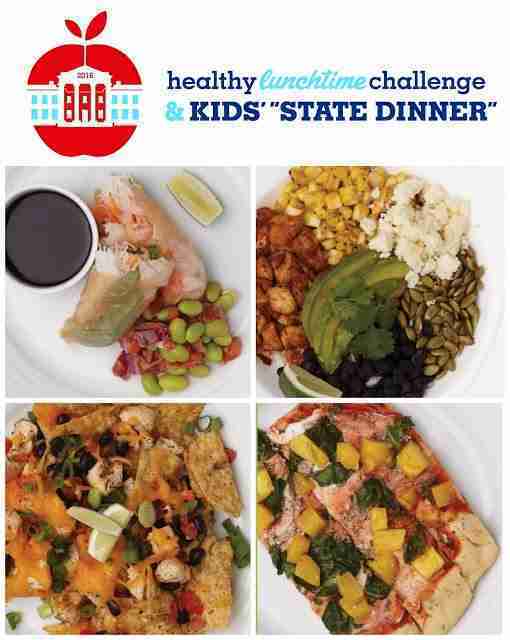 First Lady Michelle Obama hosted the 5th Annual Healthy Lunchtime Challenge and ‘Kids State Dinner’.  The challenge invited kids ages 8-12 to create a lunch recipe that is healthy, affordable and delicious.  A winner from each State was chosen and invited to the White House for the ‘Kids State Dinner’. Since Mrs. Obama became First Lady of The United States, she has been on a mission to help kids and families lead healthier lifestyles through her Let Move! initiative.  This year, the spotlight went beyond “healthy eating” to homegrown pride.  In fact, the lunch that was served at the White House was prepared from foods that was grown in the White House garden, a garden that was prepared and tended to by kids.  As Mrs. Obama said at the State Dinner, “How cool is that?” 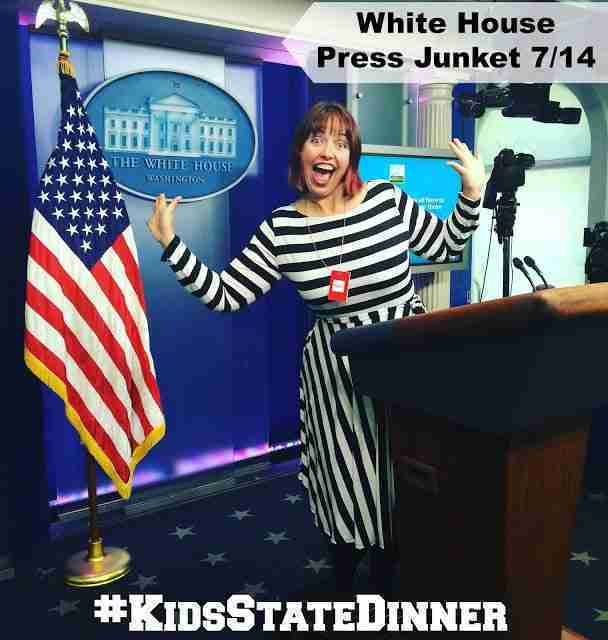 Before I walked through the White House gates to attend the ‘Kids State Dinner” event, I stood outside with my kids and took in the moment.  Seeing the White House in person is something I suggest one does in their lifetime.  The history of the city, the greatness that has stood there before me, our leaders, our founders; it is truly a special place.  So, imagine how surreal it is to walk behind those gates and step foot IN the White House.  To sit in the press office and stand on the podium, the podium where great Presidents have stood before me.  The podium where great Presidents will stand after me.  Words can not express the feeling I had that day. 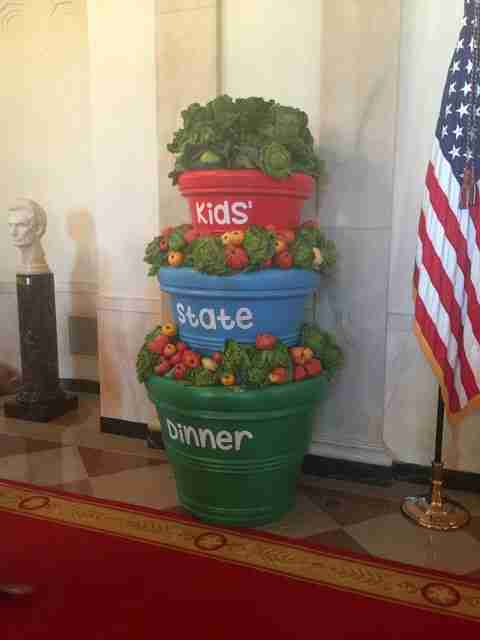 We were led from the Press Room into the State Room of the White House, where the luncheon was held.  And oh did they go all out for the occasion.  I’ve never seen the inside of the State Room before but I never imagined it to be “kid friendly”.  However, for the Kids State Dinner, they tried to make the kids as comfortable as possible, starting with the decor. 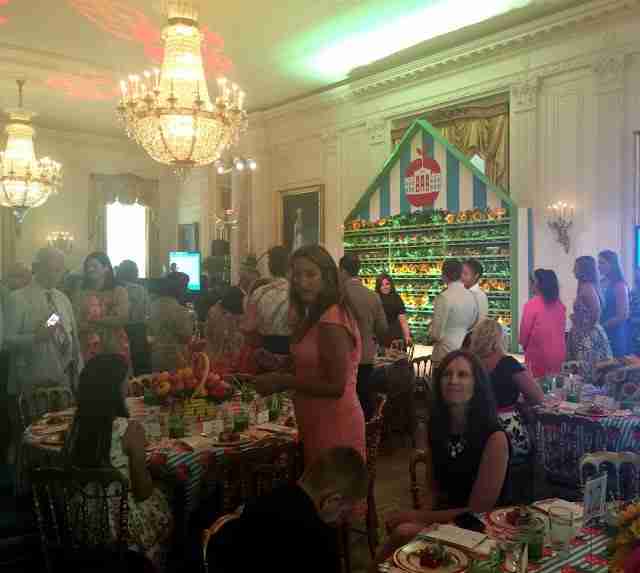 Chandeliers hung from the ceiling and portraits of Martha and George Washington hung from the walls but it had such a light atmosphere. 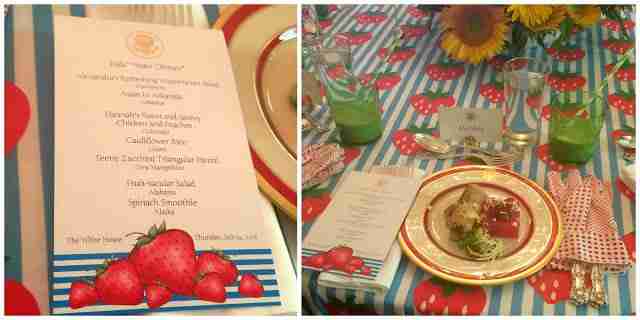 Lunch included selections from the winning recipes and like I said earlier, prepared from food from the White House garden. 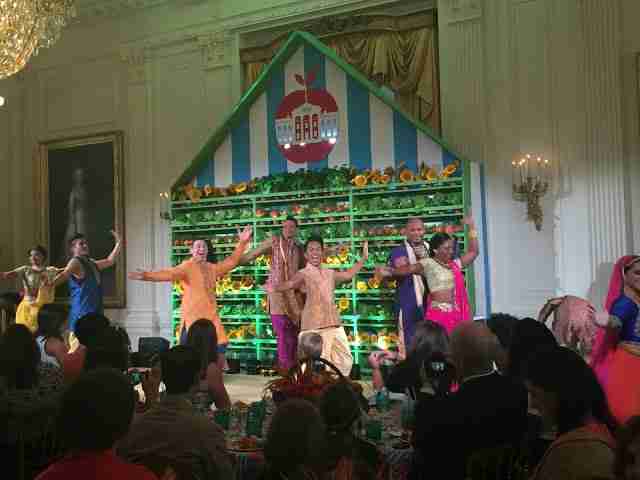 After the 5 course lunch was served, the entertainment began!  And what better entertainment for kids (and kid at heart) than Disney!!  Flown out from the Magic Kingdom at Disney World, The Jungle Book performed for the entire room! 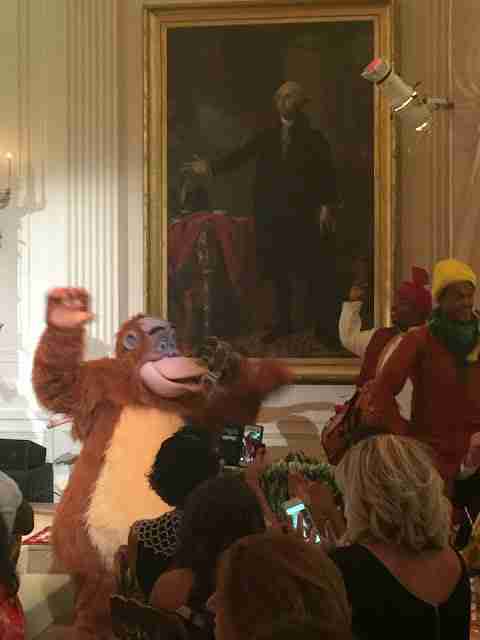 As you know, I am a HUGE Disney fan.  So, being in the White House State Room, watching King Louie from The Jungle Book dance the “Whip and Nae Nae”, in front of the portrait of George Washington was a moment I will never forget. 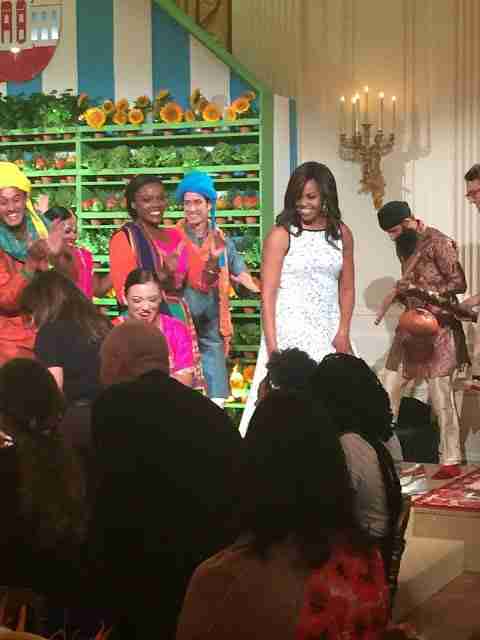 And I am sure I am not alone in this.  As the lunch/entertainment ended and Mrs. Obama led the conga line out the door, I looked around the room and on the faces of the kids.  You could see the happiness in their eyes, the joy in their smiles and the pride in their accomplishments.  It was a honor for them to be there that day, it was an honor for me to cover the event but even more-so; it was extremely important to spread the message of healthy living to all.
Check out Mrs. Obama speaking to the attendees at the Kids State Dinner.
Also, download this FREE cookbook with a full list of the winning recipes!
CLICK IMAGE BELOW TO DOWNLOAD 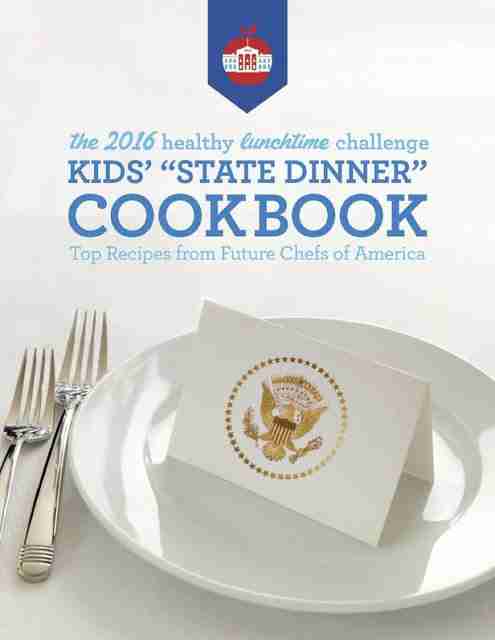