Disney’s The BFG, directed by Steven Spielberg, is NOW playing in theaters across the nation.
They say one’s eyes are the window to the soul, I for one believe one’s smile is the window to their heart.  And the moment The Big Friendly Giant’s smile flashes across the screen in The BFG, you instantly realize he has a heart of gold.  The BFG, a book based of the Roald Dahl book, is directed by the incredible Steven Spielberg working from the screenplay by Melissa Mathison – who also penned the 1982 great E.T.  Mathison died last year and this movie is a beautiful tribute to her amazing work. 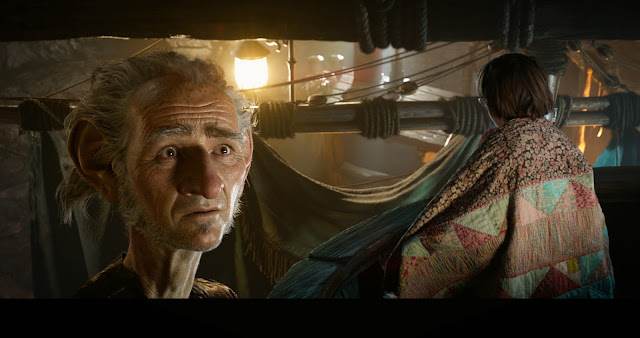 The film begins at a London orphanage where Sophie (Ruby Barnhill) is up late at night roaming the building, reading and occasionally peeping out the window.  When she hears a noise outside, she spots a thin but incredibly tall man (Mark Rylance) in a cape.  The man grabs Sophie and flees the city to a land far away; a land of Giants.
After Sophie learns that the “Big Friendly Giant” which had taken her is not like other Giants, he is a “runt” of a Giant and doesn’t eat children, she begins to warm up to him.  She helps him speak correctly, he has his own “Gobblefunk” language, and he shows her his “work”, which includes capturing dreams.  A special friendship begins to form between the two, that is until something threatens their happy home.

You see, Giant land is not safe for Sophie and when the other Giants discover that a “human” is in Giant land, they go searching the BFG’s home; essentially destroying it.  Knowing Sophie will never be safe with the Giants constant threat, they devise a plan with involves the Queen herself!

Will the plan work?  You have to see for yourself but I can tell you it is definitely worth the watch.  The story is heart-warming, magical and very E.T.-esque.  Once again, Spielberg takes the unbelievable and has us believing.  The BFG will have you believing in Giants and that stories of old are never lost.
Like THE BFG on Facebook
THE BFG NOW in theaters everywhere!
Share
Tweet
Pin
0 Shares
Guide For Geek Moms