Bad Moms opens in theaters July 29th!
Last May, I had the privilege to meet the incredibly talented and genuinely sincere Suzanne Todd.  At the time, she was promoting her film Alice Through The Looking Glass but spoke a bit about upcoming projects, Bad Moms being one of them.  She is a single working mom of two, so this movie is one after her own heart.
Writers/Directors Jon Lucas and Scott Moore, better known for their film The Hangover, are obviously not moms.  So one burning question we had for them is, “How did they get into the mindset of a mom?“
Scott Moore: Jon and I are both married, and we both have two kids. When we were trying to come up with a movie, we’re just basically sitting at home. We each have a home office, and we’re sitting at home, racking our brains, and just watching our wives in this stressed-out life trying to be a great parent.  And we’re like maybe that’s a good thing for a movie. So, the inspiration was basically our wives, and we spent a lot of time sort of talking to them and talking to their friends and throwing parties and having a bunch of moms over and a bunch of red wine, and stories would just start flowing.
Jon Lucas: I think the movie was great fun, and I knew some of the absurdity, like Gwendolyn [Christina Applegate], and the list of foods you’re not supposed to eat, which, to a dad, I was like I don’t understand lists like this. I don’t know why the school sends us things like this.
I don’t know why I get 50 e-mails a day, and there’s just so many rules now that didn’t seem to make a lot of sense to me. And when we got into the deeper, we began to see how absurd this world got. That’s when we realized that there’s really a movie here, probably more than one movie in here. 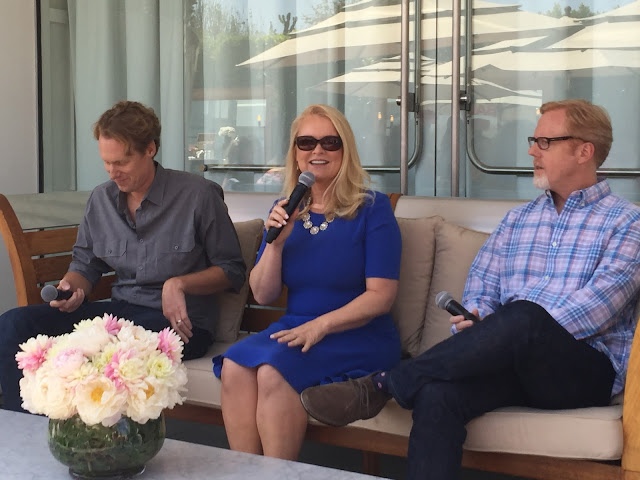 What do they hope people take away from this movie?
Scott Moore: The big one for me just to do less, doing less is okay.  Maybe this is a uniquely dad point of view, but our wives and all the moms that are in our social circle I know work so hard, and they do so many things. And is there a way to maybe do 5 percent less and spend 5 percent more time taking care of yourself or hanging out with your kids or just having a little more fun in your life.  I think it’s gotten so crazy what the expectations are. And again, it makes for great comedy. So, I’m grateful for that. We got a movie out of it. But, it’s irrational how much moms are expected to do.
Suzanne Todd: Outside they have that Nike motto that says ‘just do it’. We joke that we wanted to make t-shirts that said just do less, right? Or, just do less and enjoy it more, right? Because enjoying time with your kids is more important than making the perfect lunch.
Scott Moore: Yes. We are definitely not experts in parenting. Jon and I definitely don’t know what the **** we’re doing as being a parent. But, we think that that’s part of it. We’re not trying to put out a message, but if there is any sort of message, it’s you don’t have to be perfect.
How did they choose the cast?
Scott Moore: The casting process is complicated, and there’s a lot of alchemy and luck and chance. But, it is sort of the most important part of filmmaking, if you cast your movie right, that’s more than half the battle. That’s like 90 percent of the movie. And if this movie is any good, it’s because of the cast, not because of what we were doing. They’re just amazing together and super talented.
I don’t know the specific answer to your question, but we just started sitting down with actresses and talking to them about the script. And some of them just like got it and popped.  I remember sitting down with Kristen Bell and going you’re so Kiki [Kristen Bell]. She was just so sweet and adorable and bouncy and innocent and silly that it’s like there was no question that that’s the role that defined her.  And when we sat down with Christina Applegate, it’s like super talented, very funny, but also I was a little scared of her. So, I’m like that’s a Gwendolyn. Like, she has some balls to her that she’ll like run a room.  so, it just seemed obvious that she was going to be a great Gwendolyn.
Jon Lucas: Also in the casting process that was really fun was all the women in our movie are moms, which would see obvious. But, we met with some actresses who weren’t, and it was always hilarious when they want to be in the movie, and they’d be like, well, I have like a dog.  And you’re like, oh, that’s so different than having a kid. But, I can totally see how it’s a lot of responsibility when you have a dog. It seems like a lot of responsibility.  Then you have children, and you’re like do we still have a dog? Is there a dog around here? I completely forgot about the dog.
Scott Moore: Like, when Kathryn’s pitching a line, she’s like I would call him an ungrateful little ****, that that’s something that a mom would pitch. But, when you’re talking to actresses who aren’t moms, they’d be like, oh, I don’t think I would say that. A mom would never say that line.  I think there’s a view of motherhood when you’re not a mom yet that’s way more Hallmark and sweet and, like, oh, motherhood is just like backlit, and everyone’s wearing dresses, and it’s just like no, no, no, no. Being a mom is like three in the morning. There’s poop on the wall. And there’s a kid cutting you with something.  It’s brutal. It’s a war. It’s a physical battle.
Some people are like ‘how did you do an R-rated movie about moms?’ And one of our executives has this great line. It’s like motherhood is an R-rated job. Like, motherhood is not PG. It’s certainly not G. Motherhood is dirty. There’s a lot of stuff. It’s messy. It’s not pretty and clean and your hair looks great.
Like Bad Moms on their Official Website, Facebook , Twitter, and Instagram.
Share
Tweet
Pin
0 Shares
Guide For Geek Moms