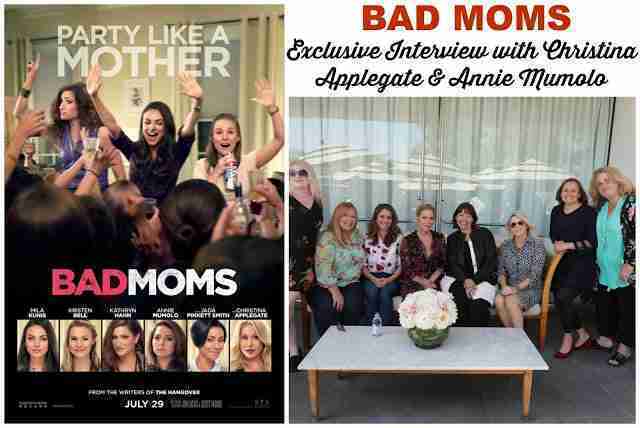 Earlier this month, I attended the Bad Moms press junket in Los Angeles.  When I received the invite for the junket, I was ecstatic!  I had viewed the Bad Moms trailer about 50 times and was definitely looking forward to the film.  At the press junket, I was told I would have the opportunity to interview some of the cast from the film, which included: Mila Kunis, Christina Applegate, Annie Mumolo and Kathryn Hahn.  I was overjoyed with the entire cast but I have to admit, Christina Applegate was a bucketlist interview for me.  I’m a fan of the TV show Married with Children and Kelly was one of my favorite characters. 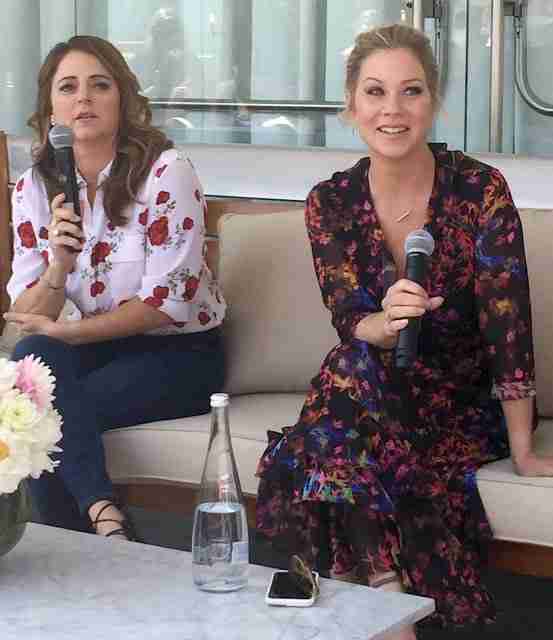 The interview area was set up like a tea party, or as Annie Mumolo commented “like a weird baby shower or wedding shower.”  We were seated outside on the patio at the beautiful SLS Hotel in Beverly Hills and we could not have asked for a lovelier day.  The tables were decorated with coordinated table clothes, umbrellas and on the menu were mimosas, sweet treats along with store bought doughnut holes (a homage to the movie).  When Annie and Christina took their seats on the couch in the middle of the group, my first thought was they looked stunning.  As they began to discuss the film, I realized immediately that both were as intelligent as they were beautiful.  Check out some highlights from the interview. 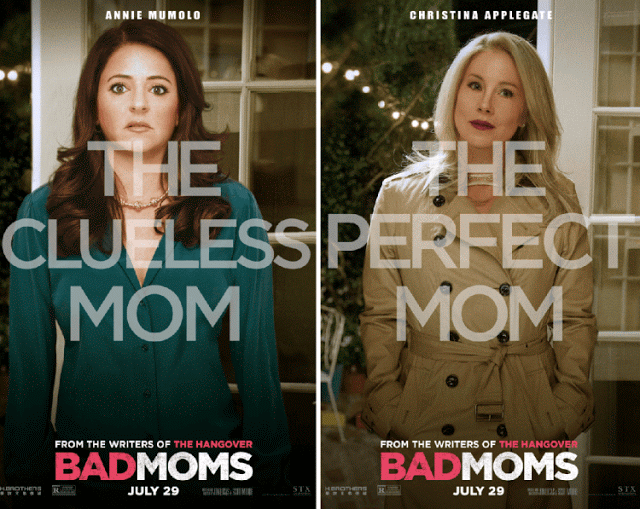 Where Christina Applegate found inspiration for her character Gwendolyn
There’s a Gwendolyn everywhere you go, you know? There’s the mom that you look to and that you think ‘I can’t believe that they like made those cupcakes and they had the time to make them with figurines and like sparklers coming out of them. And how do they do that?’ And then they always look good and smell good. I roll up to school with like hair that I haven’t washed in seven days, and my toenails are disgusting, and that’s the best I could do.  My daughter hasn’t brushed her hair in three days.  It’s always a tossup of brush teeth, brush hair, brush teeth, just teeth. Teeth is more important than brushing the hair before we get out of the house because that takes about 20 minutes of ‘brush your teeth, brush your teeth, brush your teeth please. Put that down please. Please brush your teeth. Please brush your teeth.’ That’s my morning. That’s every day. That was today. That was 7:00 AM. ‘Brush your teeth, Sadie. Brush them. Brush them. Brush them. Brush them. Brush them.’
But, I mean we can all relate to knowing a Gwendolyn, knowing a Vicky [Annie Mumolo], knowing an Amy [Mila Kunis], knowing a Carla [Kathryn Hahn], knowing a Kiki. We’re all them, you know?
Christina & Annie’s least favorite part of being a mom
Christina Applegate: It’s real hard to wake up. Waking up is real rough, and I’m trying to have a better attitude with it because sometimes she [Sadie] would come in, and she’d be like, ‘Morning, Mama.’ And I’d just be like ‘Hi.’ And I’m like, ‘Oh my God, that’s horrible.’ That’s like the first thing she sees is me just like resenting the fact that she’s waking me up 15 minutes before my alarm has gone off, shoving a doll in my face, going, ‘There’s a string, Mom. Wake up. Mom, mom, there’s a string. You need to cut it.’
I’m like ‘Is it seven o’clock, Sadie?’ So, I’m trying to be kinder in the mornings, and I also say to her ‘You do have a father. He’s on the other side of the bed. He knows where the scissors are as well.’ So, I will have this nice conversation. Like, honey, you can totally go ask Dad to do it, or to get breakfast or anything like that because, you know, we both were asleep. So, that’s okay. She’s like, ‘Oh, yes, I will.’ Next morning, 5:40, Mom, I can’t find Cheetah. And you’re like crying! So, that’s my hardest part, is starting the day. But, once I’m up, I’m good.
Annie Mumolo: Mine’s the hours between 4:30 and bedtime. The dinner to the bath to the books to the brush your teeth to get in your pajamas to the bed, that whole thing to me, I need breaks in the middle. I go in my closet. I take a few minutes and breathing. There’s wine. There’s little mini breaks and checking out and then checking back in and then like regrouping and okay. We got to get to the bath. Oh, God. Oh, my God. 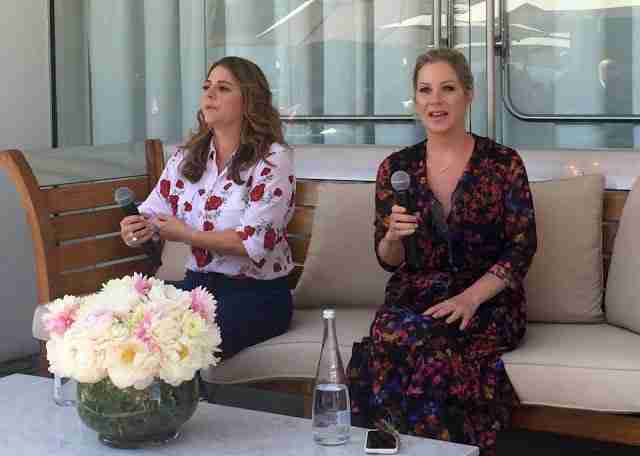 Annie Mumolo’s favorite scene in the film
I liked when they were at the bar, and this might say a little too much information about me, but when they’re like “Let’s be bad moms!’ And then they make the decision to let go of all the pressure and the trying to be perfect and just like take a minute for ourselves because it’s a wish fulfillment thing, at least for me, you know?
Movie takeaway
Christina Applegate: Cut yourself some slack. I love this saying from my kid’s karate class, practice makes progress because perfection is not something you can obtain. It’s okay to fail. It’s okay to fail in front of your kids. It teaches them that that’s how life goes and to not hold yourself to such insane, unrealistic standards in life because life’s going to throw crap at you all the time. It’s about how you get back up and how you keep moving on, and I think that’s what we’re trying to say in this movie.
It’s saying to moms don’t judge each other. Don’t judge yourself because usually we’re shaming ourselves. We’re telling ourselves that we have to be more than we’re capable of doing. You know?
Annie Mumolo: Also, I took away from it myself is to make sure to take time for yourself. I never did that, and it really took a toll on me. I always felt guilty in the beginning. Now I’m really good at being a bad mom. But, I had to transition. In the beginning, I didn’t feel okay going anywhere or letting someone else watch my kids. I always felt guilty just leaving or not doing everything and as a working mom, it’s so very challenging. But if you don’t make sure to take just a little care of yourself, you could end up in trouble, and then you can’t be the mother you hoped to be anyway. 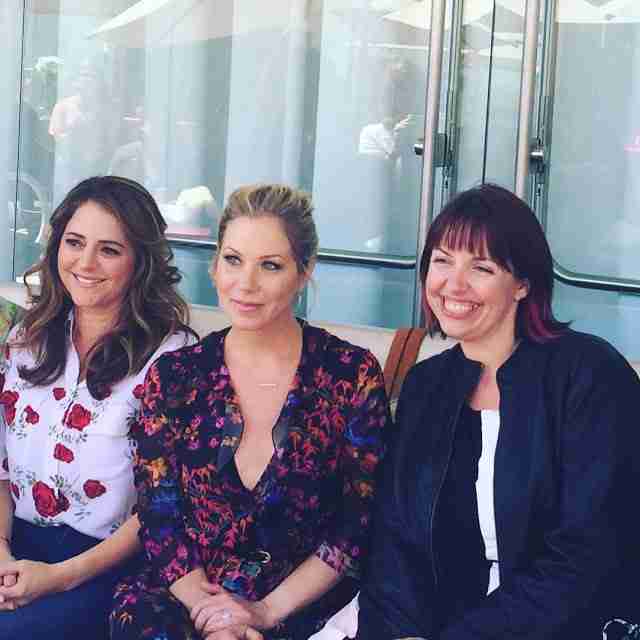 I couldn’t have said it better myself!  Bad Moms is a movie EVERY mom can relate to and a must see.  Take Annie’s advice and make time for yourself, grab some friends and go see Bad Mom‘s on July 29th!  You will be glad you did.
Share
Tweet
Pin
0 Shares
Guide For Geek Moms