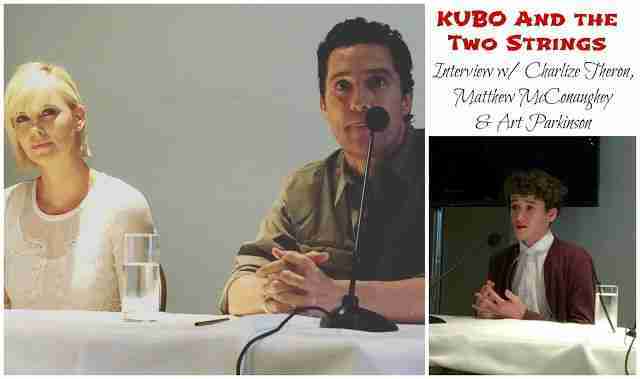 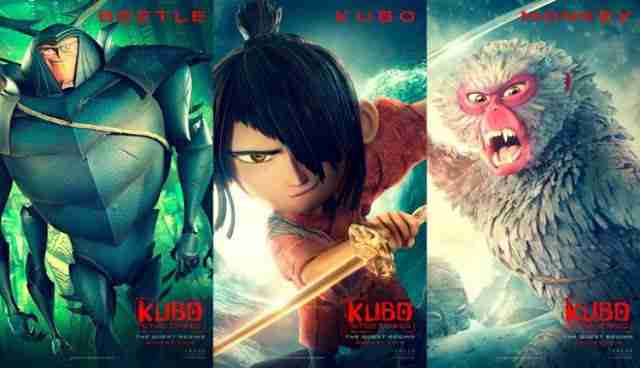 Charlize Theron, voice of Monkey, was even more beautiful in person as she is on screen.  Seriously, I have never seen a more stunning individual in my life.  And she was as charming as she was beautiful.  When she spoke, it was impossible to take your eyes off of her.  Matthew McConaughey, voice of Beetle, was handsome and a bit humble.  I think us mom bloggers made him a bit nervous because he was fidgety the entire interview.  It was cute.  Art Parkinson, voice of Kubo, was soft spoken and extremely intelligent for being the younger of the group.  Check out some highlights from the interview.
What Drew Them To The Project?
Matthew McConaughey: There’s something LAIKA seems to do with all their projects. They don’t really pander down to the age group. They deal with adult themes in a way that’s digestible for kids. There’s always a good moral to the story, that’s learned in the middle of the adventure. I liked their previous work and this script had all that.
Charlize Theron: I in general love directness. I was raised with a lot of directness. And I think in storytelling we sometimes forget that with children, and there was something about this that was just so clear, and I love that. As far as taste goes, I like that there’s nothing about this that kind of shies away from very, very real issues and I think at the end of the day that makes it very powerful and refreshing because we don’t see a lot of that. I was very excited to be a part of that.
Art Parkinson: I think it’s a very family-oriented film. I think it’s a very relate-able family-oriented film because some of the problems that the family faces in the film is very relate-able to every family. So I think that’s definitely what drew me to the project.
How Did They Prepare For The Roles?
Matthew McConaughey: For me, this was my first animated voice I’ve ever done. I tried to get on quite a few other films but never got it. And I’d just had children, so with three kids, a lot of my friends were like asking them, so what’s your favorite movie your dad did? And they’re like, well, we’ve never seen any of ‘em.” I haven’t made any films in about 10 years that they could see. So I was looking for something and I think Travis heard some interview I did on NPR, and they reached out after that and, what’d I do for preparation? I didn’t try too hard to prepare for anything, it was there in the script. We just started creating on the day and then we’d talk with Travis and say, how do you like this, how do you like that, and we were off.
Charlize Theron: I’ve always joked that my kids would have to be 52 before they could see anything I’ve been in. So it’s nice that that now has changed. Yeah, I mean, there was such a constant conversation, the process was really laid back and very relaxing and I loved it, ‘cause I had never done a voice either, other than to my son sometimes when I read and he would always say, “Don’t do that! You sound weird.” Dude, I’m doing a Russian accent, like this is cool. So you know, I was nervous too because I didn’t really know the process but the process is very relaxed, and very much like other films. You know, it’s really kind of coming back to the core and the foundation of storytelling and Travis was really encouraging of keeping things very grounded and very real, and so I felt comfortable with that.
Art Parkinson: For every project I do, me and my mum do a lot of work together, sort of, in post-production, whether it be looking over the script and reading over the script together, and then the night before, really studying the character and talking about the different ways that we can portray the character. Travis also helped a lot because he’s such a down to earth person so he’s easy to talk to. So there’s never sort of shy away from throwing in an idea, and Travis was always very encouraging in the ways that I wanted to portray the character. He always had the little Kubo sculpture set up so that also made it very easy to prepare. 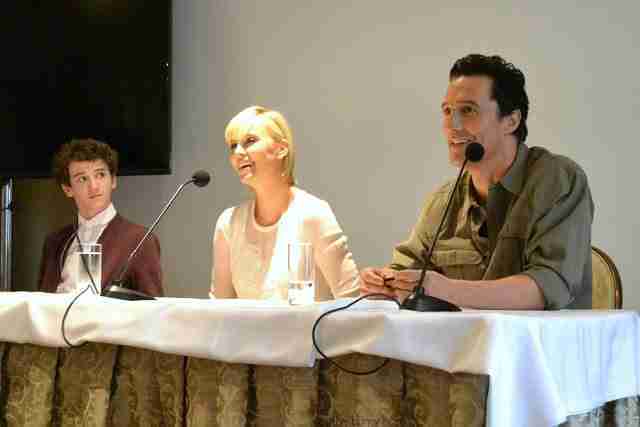 Matthew McConaughey Reads To His Kids
Matthew McConaughey: Yeah, I did read it to my children. I’ve found that that’s been a good practice for the last 8 years since I’ve had children, for any script that I do, you’re telling a story, you got to think who you’re talking to. And as Charlize and I were talking about, a lot of the films we’ve done it’s hard to say how do you pitch that to your child where they get it, and what do you leave out, you know? I know I’ve had a lot of stuff that I’ve had to leave out, and so how do you tell it in more of a mythical way. We read this over quite a few nights at bedtime and they got into it, understood it. I’d watch their reaction to where they thought things were oh, scary, spooky or funny, and then we all went and watched the film. I had a great time watching the film but I also had a great time looking out of the corner of eye at my kids at what they were laughing at. My eldest son in all the animated films he watched, he always loves the goofy sidekick, and that’s what I got to play, sort of the goofy Beetle, you know? And so they still to this day since they’ve seen it will walk by and ask me something, and as I’m trying to think, they’ll be like, oh, well, I suppose you forgot, like the Beetle. You don’t remember that, do you, Papai? So they still kind of jeer me a little bit about that. They loved it. And then my wife thoroughly loved it. She still talks about it. She had a really great emotional ride watching it, which is something that I think is true about the film. The kids are going to love it but it’s definitely for adults as well.

Kubo and the Two Strings opens in theaters everywhere on Friday, August 19, 2016.