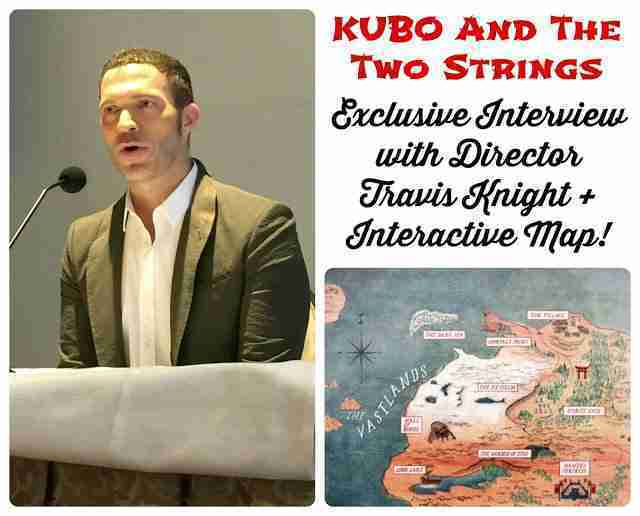 KUBO And The Two Strings opens in theaters August 19th!
I can not tell you enough how excited I am for the opening on KUBO And The Two Strings.  As you are well aware, I’m a movie buff!  Since having kids, I have probably seen every kid movie that has been released in the past 10 years.  Of these movies, I have always appreciated the artistry of the stop motion films such as The Boxtrolls and Coraline, previous films out of LAIKA Studios.  Well, they have outdone themselves with the newest stop-motion installment KUBO And The Two Strings.
Last month, I attended the press junket for KUBO And The Two Strings.  Director Travis Knight, whom I previously interviewed in Portland, attended the junket.  Check out some highlights of the interview AND a bonus Interactive Map for the kids!
How Kubo Is A Reflection of Him
Kubo is basically a version of me. He’s an artist, he’s a storyteller, he’s a musician, he’s an animator, really, when you think about it. His journey pretty much mirrors my own. He’s basically a lonely kid and that was really my experience growing up. I grew up on a, the side of a mountain that was 15 miles away from the closest town, which was itself just a little country-fied place. I spent a lot of time alone. I made friends slowly when I made them at all. I spent a lot of time exploring the woods near my house and climbing trees and jumping over creek beds and things like that. I spent a lot of time creating and drawing and making music and writing stories and when I wasn’t doing that my whole life revolved around my mom. She was my closest friend in the world. It was a beautiful relationship.
This film explores that moment in our lives when those things begin to shift and then irrevocably change; when we learn that profound, melancholic truth that to love is to hurt and those things go hand-in-hand. Love is an amazing thing because it opens us up and it makes us vulnerable. But at the same time, it heals us and it gives us strength and it makes our life worth living. And so you know, that’s one of the kind of core themes that are at the heart of this movie and every scene, to varying degrees, has elements of that at play. 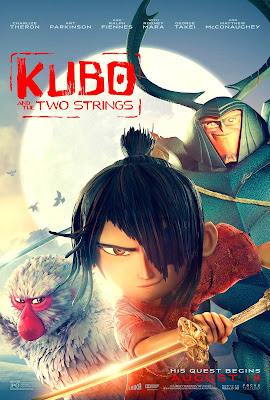 On Tackling “Difficult” Subjects In A Kids Movie
It’s a tricky thing, finding that perfect balance. It can be elusive. I think back to the things that I loved when I was a kid, the things that stuck with me, the things that took up residence in my head and stuck to my ribs. They were always those stories that had that artful balance of darkness and light, of intensity and warmth that took us on a journey in a really dynamic way and didn’t sugarcoat things, but talked about things sensitively and hopefully in a poetic way that even kids could understand. We make films for families, so we don’t speak down to our audience. We really want to respect their intelligence. And so we talk about fairly sophisticated issues and that means something to us when we were kids and now as parents with that other generational perspective, looking the other way, we’re grownup kids who now have kids of their own.
On The Music (George Harrison song)
There’s a family connection there. I grew up in a Beatles’ household. My mom was 15 years old when the Beatles were on The Ed Sullivan Show for the first time and of course, she was an enormous Beatles’ fan and that’s another gift that my mother bestowed to me. We listened to the Beatles’ record on my mom’s hi-fi, on a 8-track in my dad’s blue Cougar coupe. Beatles were just kind of part of our life. It was essentially the soundtrack of my life and one song that I love, my mother and I loved more than anything really was While My Guitar Gently Weeps and when we were thinking about this movie and tried to come up with some kind of a musical accompaniment that was evocative of the ideas and the themes that were running through the movie, my mind kept going to that song because it really is a timeless expression of love and empathy, which is fundamentally what this movie’s about.
KUBO And The Two Strings Interactive Maps
Kubo’s quest stretches far and wide through the mystical realm of the Vastlands. With his protectors Monkey and Beetle by his side, Kubo unlocks more of his powers at every challenge, racing toward an epic clash with the dark side of his magical family.
Using an innovative mix of Instagram grids, story-based video loops, and an annotated and interactive map of Kubo’s journey helped to amplify the film’s larger-than-life themes of magic, mythology, and heroism, this mind-boggling map will give users an emotional investment into Kubo’s quest before walking into the theater.
We hope you’ll take the time to share this exciting experience with your readers!
Kubo and the Two Strings opens nationwide August 19, 2016.
Share89
Tweet
Pin
89 Shares
Guide For Geek Moms