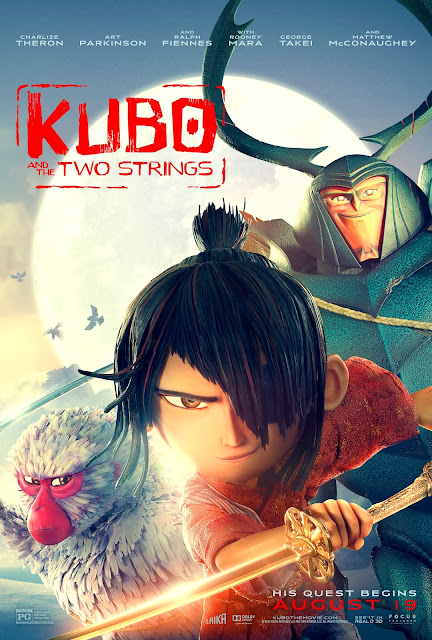 Synopsis
Kubo and the Two Strings is an epic action-adventure set in a fantastical Japan from acclaimed animation studio LAIKA. Clever, kindhearted Kubo (voiced by Art Parkinson of “Game of Thrones”) ekes out a humble living, telling stories to the people of his seaside town including Hosato (George Takei), Hashi (Cary-Hiroyuki Tagawa), and Kameyo (Academy Award nominee Brenda Vaccaro). But his relatively quiet existence is shattered when he accidentally summons a spirit from his past which storms down from the heavens to enforce an age-old vendetta. Now on the run, Kubo joins forces with Monkey (Academy Award winner Charlize Theron) and Beetle (Academy Award winner Matthew McConaughey), and sets out on a thrilling quest to save his family and solve the mystery of his fallen father, the greatest samurai warrior the world has ever known. With the help of his shamisen – a magical musical instrument – Kubo must battle gods and monsters, including the vengeful Moon King (Academy Award nominee Ralph Fiennes) and the evil twin Sisters (Academy Award nominee Rooney Mara), to unlock the secret of his legacy, reunite his family, and fulfill his heroic destiny.

The Artistry
Back in June, I had the opportunity to visit LAIKA Studios and see first hand the making of a stop-motion film.  It is unbelievable the amount of time, creativeness and heart put into Kubo and the Two Strings.  This work totally panned out because when the movie comes alive onscreen, you are lost in the magical adventure it takes you on.  And the fact that you forget these characters are puppets, speaks volumes.  It is worth watching for the stunning visuals alone but the story is definitely a cherry on top!

The Story
As a parent, the story of Kubo’s bond with his very sick mother resonated deep in me.  The sacrifices he makes to care for his sick mother and the ultimate sacrifice she makes for her son will tug at your heart.  The story is much more than “a boy on an adventure” but also a powerful lesson on the meaning of family and the strength of lasting memories.

Appropriate For Children?
Kubo and the Two Strings is rated PG due to scary images and peril.  There may be scenes in the film that could possibly frighten very young children, however I think school age children would not have a problem with it.  It also tackles very “adult” issues such as death.  But is this really a “bad” thing?  I think not.  I look at it as an avenue to open up discussion on such sensitive issues.
Kubo and the Two Strings is much more than a fun movie to take the kids to see.  It is an experience, one you will not want to miss.  So what are you waiting for?  Go see it, you can thank me later!