Disney’s Queen Of Katwe in theaters everywhere September 30th!
Checkmate.  The word checkmate in chess comes from Persian phrase “Shah Mat”, which means “the king is defeated.”  I’m sure many of us can look back on our own lives and recognize a time we felt we were in “checkmate.”  However, like the game of chess, one can always start over, pick oneself up and return to your square.  The game of chess and its pieces are a perfect metaphor for life.  At one time or another, I’ve felt like I was each and every one of those pieces on the board.  I was a pawn, the smallest piece on the board that moves one square at a time to reach its goal.  I was a king, the most important but also the most vulnerable piece, needing protection from all the pieces around it.  Even a queen, the piece possessing great power which moves leaps and bounds across the board of life.
The movie Queen Of Katwe is not only a story about the international chess champion, Phiona Mutesi (Madina Nalwanga) but also a story of how “the pawn became a queen.”  It is a story about an uneducated girl from the slums of Uganda realizing her potential in life by learning chess, gaining confidence by winning at the game, and achieving success by the support of the “pieces” around her.

Phiona and her brother Brian (Martin Kabanza) are first introduced to chess by Robert Katende (David Oyelowo), a man who grew up in the slums of Uganda but worked his way to the university to escape the cycle.  Although he was educated in the field of engineering, the slums called him back to teach and inspire other kids to better their lives.  He taught them chess, he taught them that no matter where you are from, rich or poor, you can still be a winner. 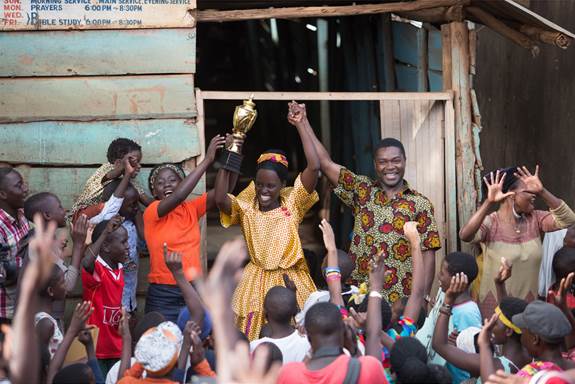 As the children learned the game and enjoyed the competition between eachother, they also gained the most valuable trait, confidence.  Under Robert’s tutelage, the children began to realize their potential, not just in chess but in life.  Even though they were in very unfortunate circumstances, it didn’t mean they couldn’t be winners.  And so, they set their hearts on entering chess competitions and beating “city kids”.

While the movie is inspiring and heartwarming, some of my favorite scenes were when the children of Katwe enter chess tournaments and beat the pants off of the rich kids who haughtily look down upon them.  And while we watch the successes from all the children, it is Phiona who emerges as a truly special player.  Not only is she bringing home trophies and giving the people of Katwe something to cheer about, her chess playing skills are also surpassing the teacher.

The fact Phiona is a girl achieving this sort of success in a very male orientated sport and society is pretty unbelievable, that is, until you are introduced to her mother Nakku Harriet (Lupita Nyong’o).  Harriet is a strong and fiercely protective mother, who was forced to raise her four children alone.  While she was suspicious of Robert and his chess club at first, she slowly began to realize the positive effects it was bringing her children, especially Phiona.  Struggling to keep her family together in the most desperate of situations, she makes tremendous sacrifices to help Phiona pursue her dream of becoming a chess champion. 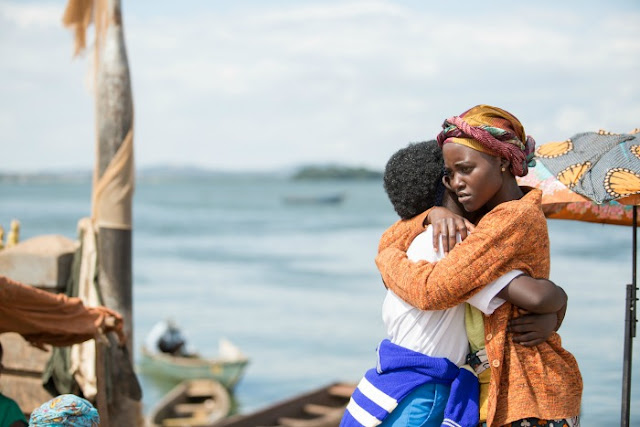 Queen Of Katwe is not only the perfect addition to the Disney movie collection by exemplifying family friendly entertainment but it is a particularly inspiring film for us girls out there, big and small.  I am sure the fact this “girl power” is so prevalent in Queen Of Katwe is due to the incredibly talented female Director Mira Nair.  She knows the exact emotional buttons to push and delivers an emotional, entertaining and empowering film that completely does justice to the story.  On top of it, she makes the game of chess, one that is slow and meticulous, look lively and fun!
Queen Of Katwe is a movie for everyone and in my opinion, it will be an awards contender!  The acting is incredible, the story is exceptional and it gives us proof in life, “the little one can become the big one”, just like in the game.
Like Queen of Katwe on Facebook
Follow Queen of Katwe on Instagram