Ratchet and Clank is NOW on BluRay/DVD!
I have a friend that constantly tells me, I will find any excuse to have a party!  This is true and not true.  I do like to party.  I love inviting friends over, preparing food to serve and most importantly; I enjoy having a good time!  Who doesn’t?  However, I like to have a good excuse and a “theme” to my parties.  Sure, birthdays are always cause for celebration but my household likes to find other occasions to celebrate.  Like the time Mardi Gras was around the corner and we wanted to show our Midwestern friends how to party like a “Nawlins”.  So we had a Mardi Gras celebration with the girls in my daughter class!  With the release of the Ratchet and Clank BluRay/DVD, we found another great excuse to gather our friends and have a good time! 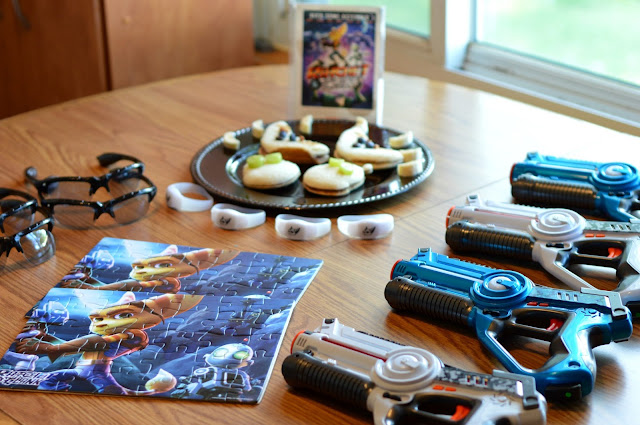 This isn’t the first time I discussed this awesome movie on my blog.  Earlier this year, I sent a contributor out to Los Angeles to pre-screen Ratchet and Clank and interview the stars of the film!  After reading her review, I was a bit jealous she was able to screen the movie early!  It sounded so cute and a movie my kids would adore!  I wanted to take them to the theaters immediately and see the film.  However, time got the best of us and we did not get a chance to see it.  So, when I received the opportunity to review the DVD and have a Space Ranger party, I jumped at it!!  When my kids saw all the Ratchet and Clank goodies that were provided to us, they jumped too!

And when our friends saw our set up for the Ratchet and Clank Space Ranger training party, they were all smiles.  The first mission to become a Space Ranger was the “mental” evaluation.  The kids had to pass a series of mental examines that included solving puzzles.  This was a smart bunch because they all passed!

Next up was the weapons test.  Could they shoot a laser gun?  Could they dodge laser bullets?  The girls jumped right into it, even proving they could accomplish the weapons test in a dress and wearing kitty ears!  Once they passed the test, they immediately went to the dart board challenge.  You know, a Space Ranger needs great eye/hand coordination!  Girls: Passed.

They even turned on the other trainees and tried to take their snacks!  This is when the Head Space Ranger in Charge had to step in.  Maybe we should have done the weapons test AFTER watching the film.  You know, so they got a sense of how a “good” Space Ranger behaves.  So, that is what we did.  We gathered all the trainees and viewed Ratchet and Clank!
I will be happy to inform you that all trainees passed the Space Ranger training program and received their official certification.  I would have captured a photo but they were too fast, they all sped off to save the Galaxy!

You can win a copy of Ratchet and Clank for your very own! Enter using the Rafflecopter form below. This giveaway is open to US residents ages 18+. Winner will be verified, emailed and have 48 hours to confirm before a new winner is chosen. The giveaway will end September 9 at 11:59pm EST. Good luck!