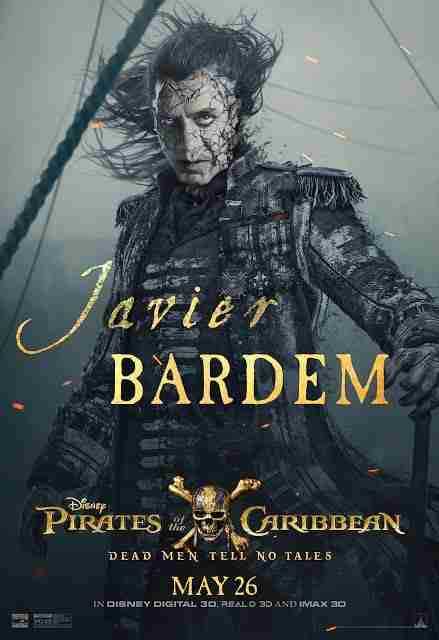 Javier Bardem plays Captain Salazar in Pirates Of The Caribbean: Dead Men Tell No Tales, opening in theaters across the nation on May 26th!  Last week while in Los Angeles to cover the red carpet movie premiere, I had the opportunity to interview Javier (we are on a first name basis like that) on his role in the film.

Javier is no stranger to playing a villain.  In fact, he won the Academy Award for Best Supporting Actor for his role as the psychopathic assassin with bad hair in No Country For Old Men.  I have to admit, he totally creeped me out in that movie and didn’t catch my eye as a ‘dreamy hunk’ until I saw him opposite Julia Roberts in Eat Pray Love.  Remember the line, “You don’t need a man, Liz. You need a champion.“?  Dead.  I melted that moment and have been a fan ever since. 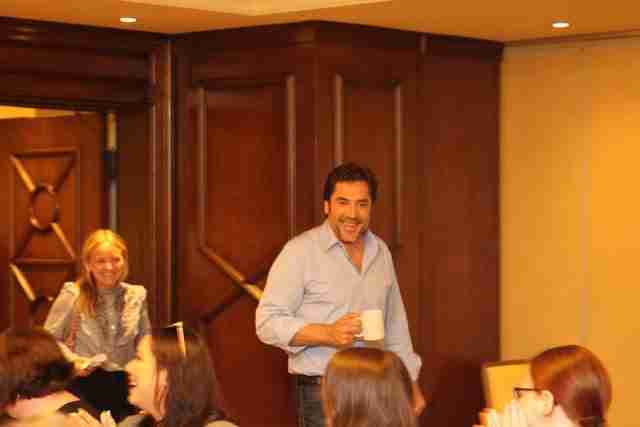 You would think with Javiers extensive career he would be ready for anything, even a room full of Mommy Bloggers!  However, I our huge smiles and loud applause took him by surprise because when he entered the room he declared, “Oh my God! I’m so scared right now! I thought it was just a woman or two, I’m a daddy so don’t be too tough on me.”  Javier was charming with an amazing sense of humor and an accident to fawn over, of course we weren’t tough on him!  Here are some highlights of the interview:

On Becoming Involved With The Film

I got involved back then, 2010, because Penelope [Cruz (his wife)] was shooting Pirates 4.  I went to the set in Hawaii, Los Angeles and London.  I was very jealous because I was seeing all this amazing production taking place, the water, the special effects, the boat, the sword fighting. I wanted to be one of those.  I said to Jerry, “Jerry please, give me a job.”  He called me five years after and I was so surprised and honored because as a movie goer, I love the franchise.  And it’s a Disney movie.  I think it’s very powerful.  It has some powerful moments, the movie itself.

On His Costume & The Black Goo

Monkey poo.  They told me it was supposed to be like chocolate.  That taste was worse than that, I was supposed to put it on the teeth.  I said give me that, so I drunk it and then I went to play the first scene, it starts to pour out of my mouth and he [Geoffrey Rush] was very disgusted.  I thought it was like a rage pouring out.  It’s not blood.  It’s like the rage of the character coming out, something more physical, like a bull.  I’d always thought the character was like a wounded bull, out of breath with a very strong idea for revenge.

On Portraying Emotions Through The Make-Up

That was one of my concerns, to see if my facial expression can go through the mask. Once I had the mask on the face, I realized that I could express myself through it, which is important.  Otherwise, your performance is killed by it.  One of the things that these special effects people have done so well in this movie is that they brought magic into the performance without killing it, it’s fantastic. 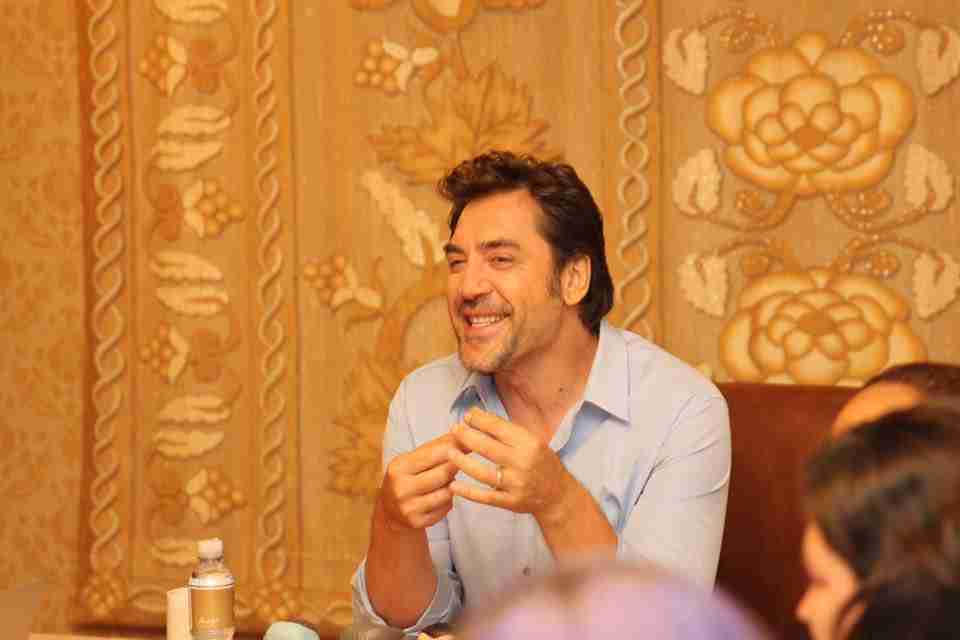 On The CGI In The Film

I was working a little bit on the darkness they showed me some pictures and videos and it was like ‘Yeah, right.  Looks great but how is it going to look like at the end?’  The whole movie was shot in studio, so I didn’t see that ship or the sea for a second, except for one scene on the beach but the rest was on the studio.  When I saw the movie, it was like I’d been on the sea forever!

On Working With Johnny Depp

I met him in 1999 in Mexico in Vera Cruz doing a movie called ‘Before Night Falls’.  Johnny plays a drag queen “Bon-Bon”, I was in a trailer and I saw this beautiful blonde hair and I said I don’t know you, but you’ve got a great butt.  Since then, we’ve been good friends and he was a gentleman then.  He was super nice, very caring, very funny, and don’t give himself too much importance at all.  In 2015, he was the same guy except that he’s playing Jack Sparrow which is an iconic character. 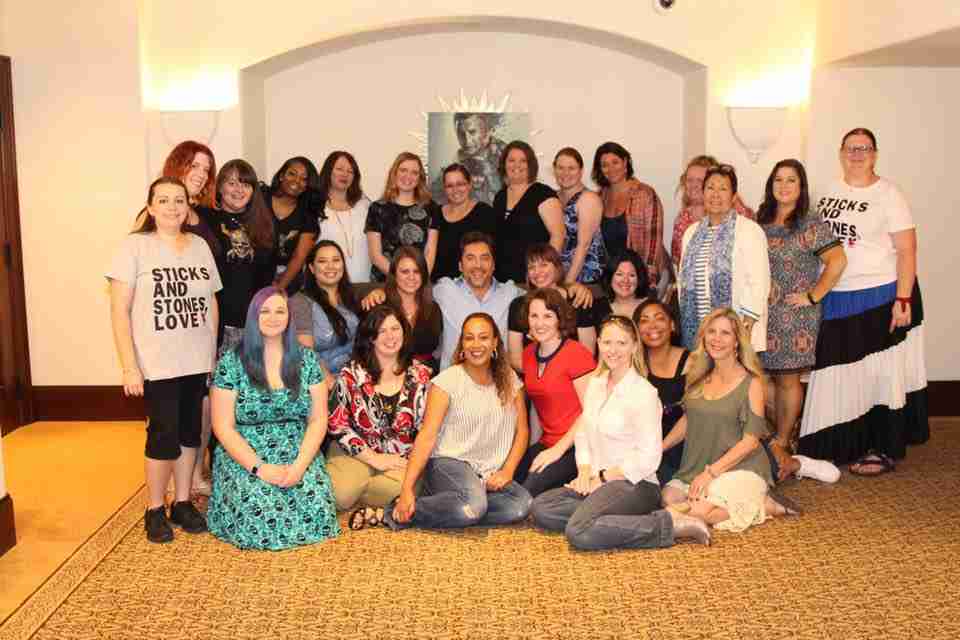 By the time the interview was over it was apparent Javier wasn’t scared any longer!  In fact while taking a group photo with us, he was completely at ease, even putting his arms around a couple of very lucky women!  It was in that moment time stood still….

Why you ask?  Because Javier put his arm around ME!  I can’t tell you what happened after that, things are still a little cloudy.  All I can remember is Javier’s arm moving in slow motion around me, everyone in the room began to blur out and despite a room full of conversation, there was only sweet music playing in my head.  it was just Javier and I posing for a photo together and it was magical, ya’ll!  Just like the film itself.

Visit the official PIRATES OF THE CARIBBEAN: DEAD MEN TELL NO TALES website

PIRATES OF THE CARIBBEAN: DEAD MEN TELL NO TALES opens in theaters everywhere May 26th!

Directors Joachim Ronning & Espen Sandberg of Pirates of the Caribbean

[…] full of applause.  In this case, Joachim and Espen happened to arrive a little early as we were taking a picture with Javier Bardem.  I am sure they noticed his arm around me and my dreamy eyes for him! Ha!  They had huge smiles […]

Interview With Brenton Thwaites Henry Turner in Pirates Of The Caribbean

[…] had the chance to interview much of the talent from the film.  You probably recall my moment with Javier Bardem and the interesting stories told by Geoffrey Rush, I thought the interviews couldn’t get any […]