I was invited to attend #TheNewKia Event on behalf of Kia.  All opinions are my own. 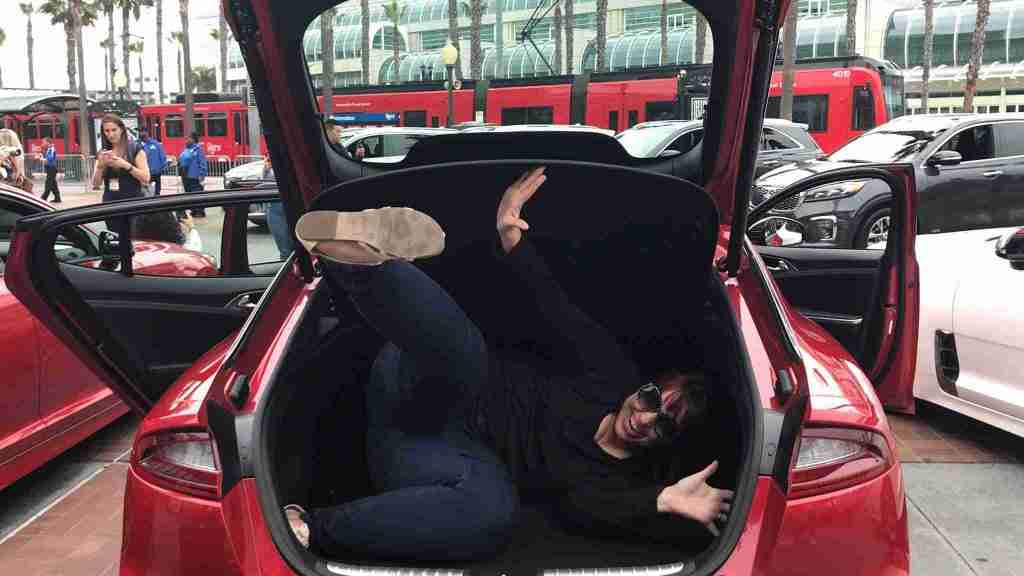 I attended #TheNewKia event in San Diego last week, where influencers were flown out to experience the new Kia Stinger. How did I end up in the trunk of a Kia Stinger?  Read on.

My favorite part when attending a press junket is the company in attendance, not only do we hobnob with the brands top PR dudes & dudettes but we also meet up with other top influencers who “get” eachother and what we do.  This particular trip for #TheNewKia event, had influencers not only put to the task to check out the new Kia Stinger but we were also challenged to a contest to make a “carpool karaoke video”.  A contest?  With a winner?  Oh challenge accepted Kia, challenge accepted.

The rules were simple, we were to form teams of two to four and use the Harman/Kardon Audio System to play a portion of any song.  We must shoot a short video in 90 seconds or less of ourselves rocking out inside or outside the Stinger and submit it by 5PM that evening.  The pressure was on. 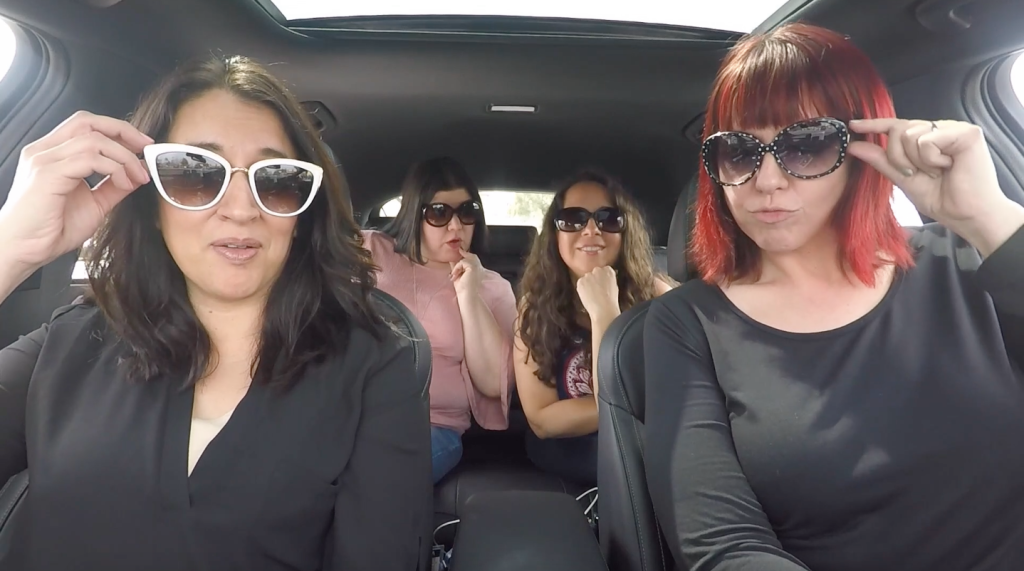 Our Team: The Spice Stingers

It all happened so fast, I can not even begin to tell you how our group was formed but isn’t that how magic happens?  Pre-trip, the contest was announced and within the hour our group was formed: ‘The Spice Stingers”, our song was chosen: “Wannabe” by the Spice Girls and our creative juices were in overdrive (total car pun there).  It was apparent early on our group was the perfect mix of everything, there wasn’t a “No, I am not doing this.” in sight.  We were in it to win it and now we had to bring it!

As the ideas started to flow, we each began to settle into our Spice Stingers roles.  Oh, I guess i should introduce you to the newly formed group. 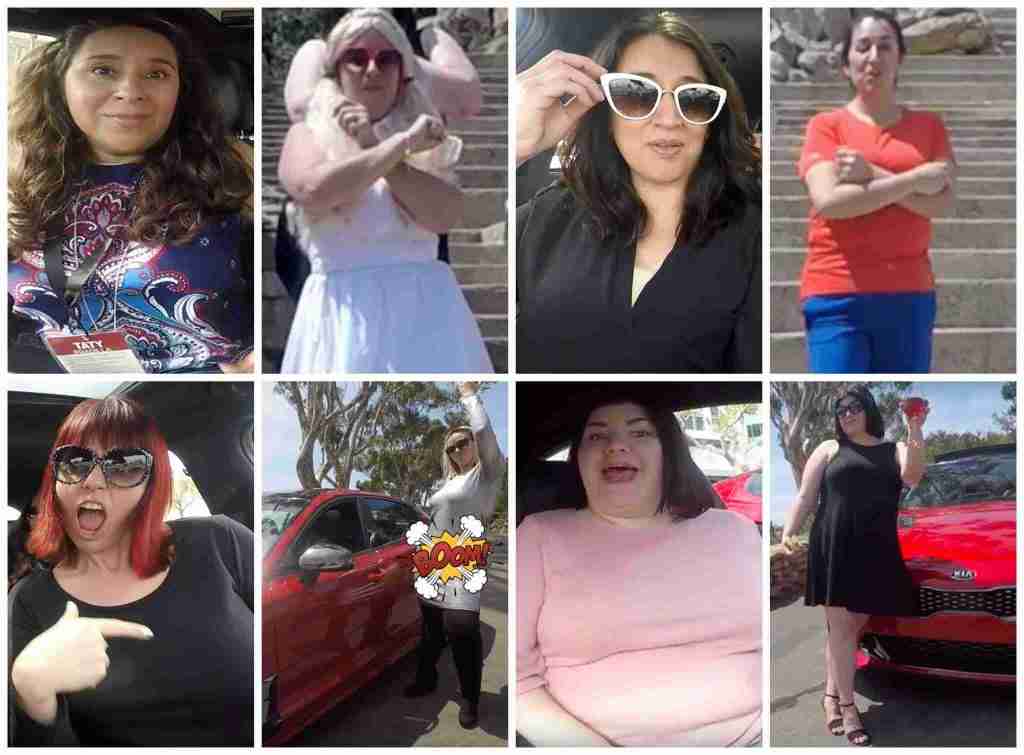 We had Taty, AKA Baby Spice, complete with a blonde wig and lollipop.  Taty was a trooper to this wild bunch, when a suggestion was made she was on it, even tracking down the perfect lollipop to use for the video.  Next up was Tania, AKA Sporty Spice.  In my mind, Sporty Spice was the easiest role to “dress” for, I mean she didn’t have to wear a leotard like Ginger but when you meet Tania, Sporty was so out of character for her.  Example: Tania had to change OUT of heels and into sneakers to dress for the role!  And did I mention that leotard?  Next up was me (Amanda), AKA Ginger Spice, due to the red hair.  I agreed to the Ginger Spice role before seeing the ‘Wannabe” video and Ginger full on in a leotard.  I did not have a leotard but i did pull out a silver, extra tight dress which was buried in the back of my closet.  After being in that dress for the day and seeing myself on camera, I have dubbed myself “pregnant Ginger with a belly full of donuts”.  And last but not least we had Amy, AKA Posh Spice, AKA OCD Spice, AKA Editing Wizard Spice.  You can say that Amy was the glue that put our amazing video together.  Her editing skillz were on point, she story boarded the video a week beforehand and… 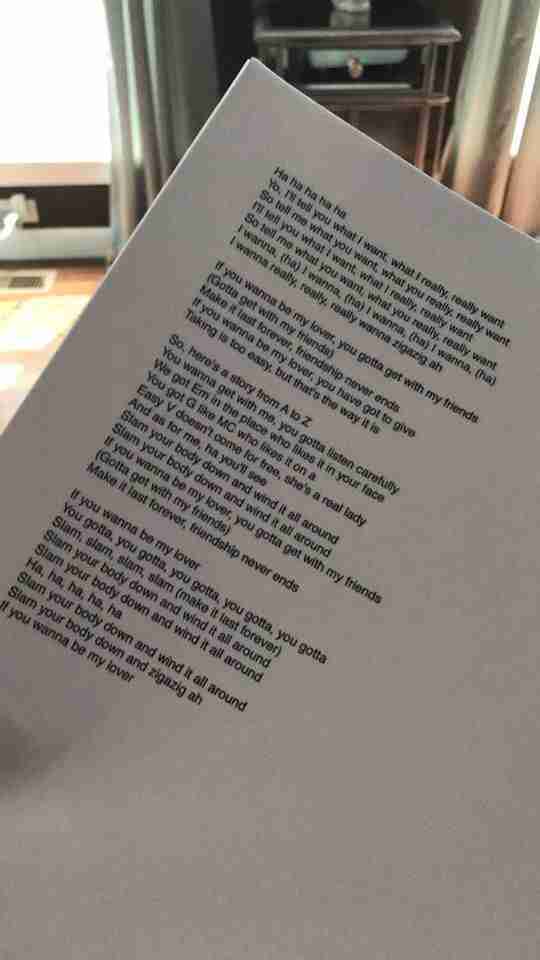 We even had a script!  No joke, Amy showed up complete with an edited (90 second) music clip and a script.  Although we all prepared beforehand with our costumes and learning the “‘Wannabe’ stair dance”, no one was more prepared than Amy.  And then the alarms sounded off and we raced toward the cars at lightening speed.  The competition has begun… 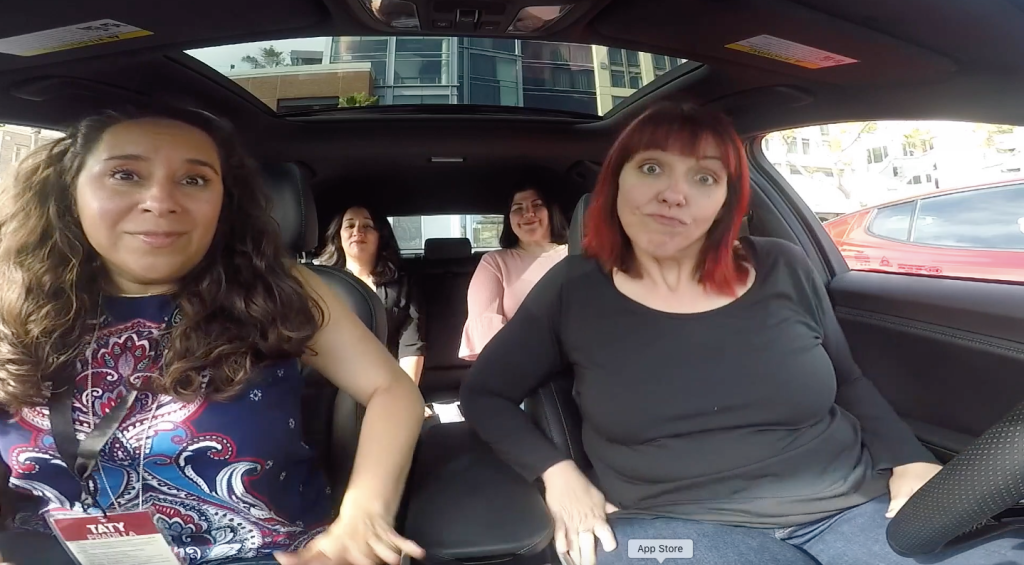 Magic does not just “happen”, ya’ll.  The formula for our success came with a bit of luck, a bit of hard work, a bit of creativity and a lot of team work.  You would think with OCD Amy taking the reigns, there would have been bickering.  You would think wrong.  While having the time limit did get a little stressful at times, we just rolled with it.  There was not an eye rolled, not a negative comment made, nothing.  As a matter of fact, our success that day was in the bonds we made with one another.  We knew eachother before this trip, before this contest, but in making this video sometime deeper happened.  We encouraged eachother, we lifted eachother up all the while smiling (and laughing) through it. 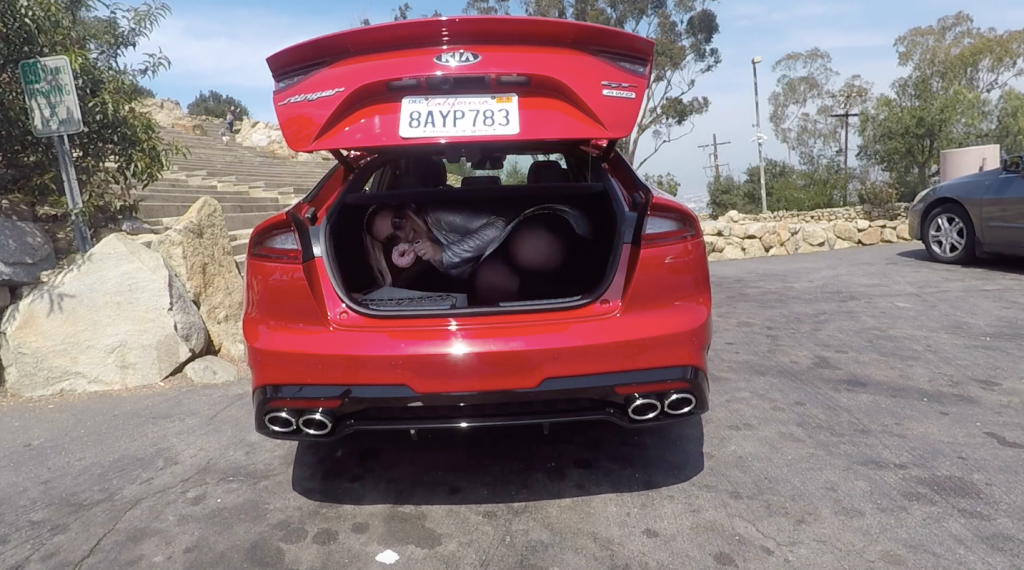 We went above and beyond to get the perfect “shot” for the video, even popping out of the trunk of a Kia Stinger!  But as the day progressed, it became less and less about winning “the contest” and more about the respect and friendship we developed for eachother.  We lifted eachother up…

The world of blogging can be a harsh place, some out there will step on others backs to rise above.  I’ve seen the cruelty, I vowed never to be a part of the cruelty and I have questioned my place in this “blogging world” because I am not cut out for that dog eat dog life.  But on this day, on this Kia trip, with this group of women; I. was. inspired.  We were not out there to one up the other or outshine the other but to come together as a team and make something great.  Sure the video turned out swell but in my mind, what we achieved that day was so much more powerful.  We were living proof that:

Success DOES comes from lifting one another up.

Yes, I popped out of the trunk of the Kia Stinger with a donut.  Yes, we won the contest.  Yes, we developed memories and friendships that will last a lifetime.  And yes, the embarassing moments in this video was worth every second.

I hope you enjoy viewing the video as much as we enjoyed making it!