A bit on Keanussance and how I made it famous by asking Keanu Reeves in the Toy Story 4 interview! Also, Tim Allen and Christina Hendricks interview.

Last week I had the opportunity to attend the Toy Story 4 press junket in Orlando, I spoke about it earlier when Tom Hanks jokes about the strict press tour rules for Toy Story 4.  Also in attendance was Tim Allen (voice of Buzz Lightyear), Christina Hendricks (voice of Gabby Gabby), and the voice of Duke Caboom himself Keanu Reeves.  I have mentioned over on Guide For Geeks alittle about my encounter with Keanu Reeves and how I made Keanussance a household name.  Check out my video below where I asked Keanu Reeves the Keanussance question!

Let us first discuss Keanu Reeves because it was me that asked him the famous question about “Keanussance“, the term that is being used EVERYWHERE now.  I made Keanussance famous again by asking Keanu Reeves about it at the Toy Story 4 junket and ALL the big sites started talking/writing about it.  Some say I made Keanu mad by asking him about the “revival”, some say I confused him but as the video shows, I think he enjoyed it.

However, that was not the only moment I had with Keanu.  I also, sorta, ran into him before the press conference started as I was waiting to enter the press room.  I was standing in line and was asked to move over by security, I was blocking the hall a bit, and when I turned no other than Keanu Reeves himself walked by not 2 feet from in front of me and I became weak in the knees, ya’ll!  I have heard of people being “star stuck”, it has never happened to me before but when Keanu was right in front of my face, I became weak in the knees and fell back a bit and had to be caught by friends!  True story!

Like I said, this has never happened to me before so my only conclusion is we had some sort of draw to eachother.  It totally makes sense now why Duke Caboom is my favorite new character in Toy Story 4, it was Keanu that drew me to him!  I knew it had to be something more cause I am not usually attracted to cry babies.  Yes, Duke Caboom can be a bit of a cry baby and Keanu even talked about it at the junket! “Duke Caboom just happened to be a crybaby. And super with a big heart and brave who loved life and so I think that there’s a bit of Duke Caboom in all of us.“

And why did Keanu Reeves take on this project?  Keanu even admits one of the biggest draws to working on Toy Story 4 was not only working with Pixar, because EVERYONE wants to work with Pixar, but also the rest of the cast.  “I was really excited. I knew I wasn’t going to be able to work with Tim and with Tom. But I knew that working with Pixar and being with these characters and these performers, that I was getting a chance to be a part of something that’s legendary.“

Keanu’s respect for the rest of the cast was very apparent, especially when it came to newcomer Christina hendricks who could easily have been over shadowed in an interview with legends like Keanu Reeves and Tim Allen but Keanu always made sure to include her.  Cause that is just the type of guy he is, Keanussance For Ever!

Christina Hendricks is best known for her role in Mad Men, but she comes into the Toy Story franchise fiercely in her role as Gabby Gabby.  Some may call Gabby Gabby and villain, some may call her misunderstood, you have to see the movie for yourself to make your opinions but what did Hendricks have to say about her?  “I think when children see this movie, she [Gabby Gabby] comes across as sort of like the villain at first. And then you realize that she’s coming from a very loving place. And I think that’s important to sort of say maybe you don’t like someone at first. But how did they get there and why are they there and understanding their story. So I think she’s very special in that way.“

Last but not least we have to talk about Tim Allen [Buzz Lightyear], the veteran in the group to the Toy Story film franchise.  Allen was just of funy quips and even joked about his statue of Buzz Lightyear being by the bathrooms in Toy Story Land while Tom Hanks [Woody] had his at the entrance but between his witty jokes, you got a sense more of how special it has been to be a part of Toy Story.  Allen states, “This is a very difficult process for me to do these movies. Because I don’t get to work with the other actors and it’s just difficult. I have a hard time doing this. It’s not the easiest thing. And to do one, I can’t believe we got through this. I hope everybody likes it. I hope that you appreciate what these guys have done. I loved it. I never look forward past that. It was great. Number two was an amazing occurrence. And then I look at it like I’m an old Mickey Mouse guy. Mickey Mouse, I don’t know why. And I told these guys, I don’t know what you’re going to do with Pixar Mickey Mouse movie. But I like the fact that this is a series of stories. And when I saw, I think Buzz and Woody were on a pencil racer at a McDonalds or something. As weird as that sounds, we’ve hit a high mark when you become an icon. I never thought of that. It never occurred to me and I’ll say it again. There is a theme park out here. A theme park. I love theme parks. There’s a theme park. And a really, really good one and a really spectacular one that’s about this movie we started 25 years ago. I can’t describe except I’m honored and humbled to be part of this thing.“ 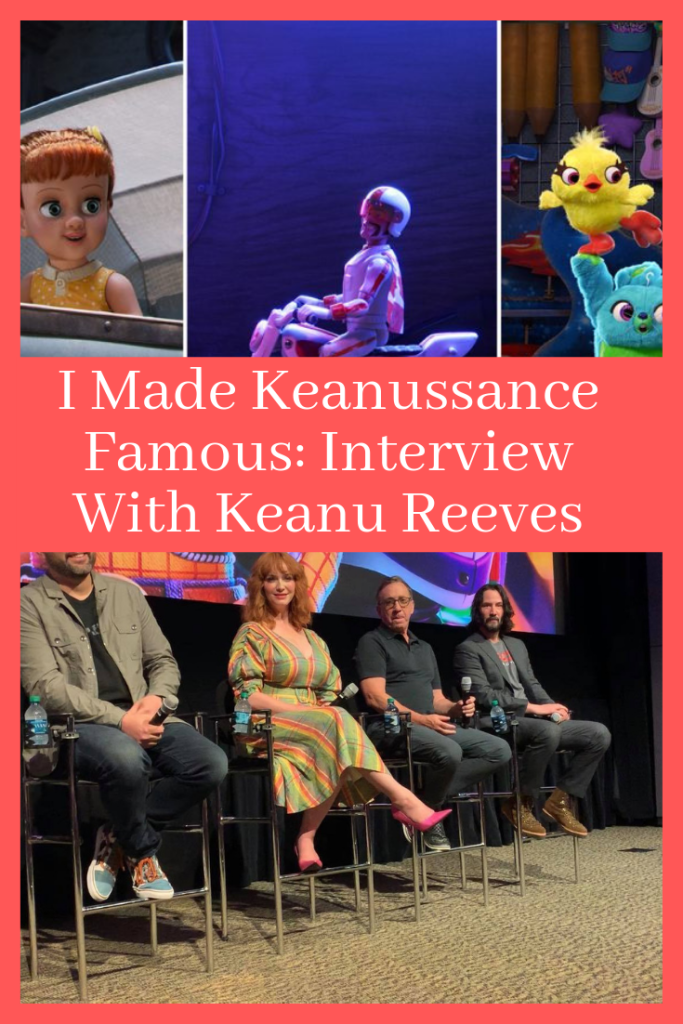