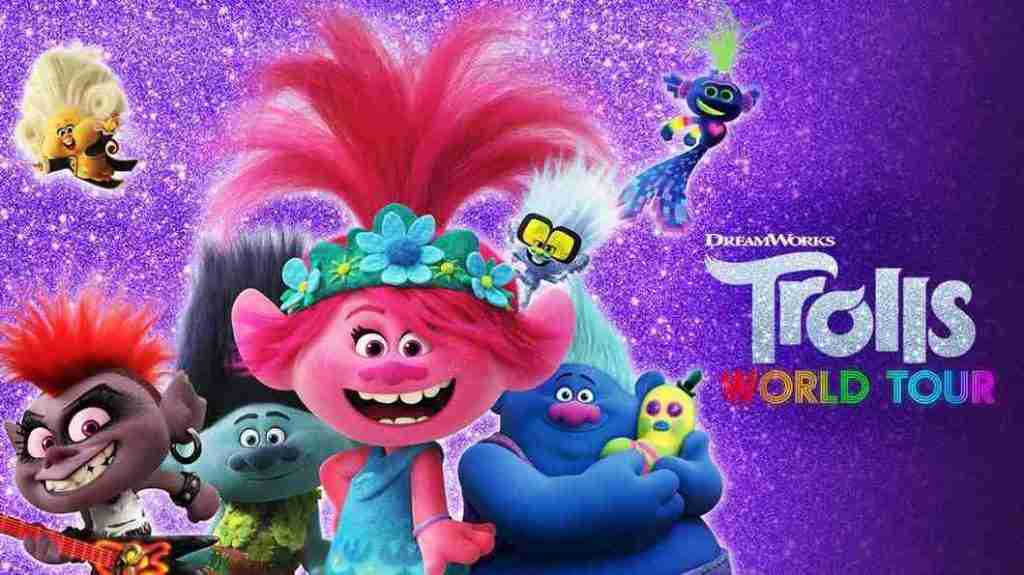 The long awaited sequel, Trolls World Tour, is now available to rent TODAY!  The movie brings back the characters we know and love, Poppy (Anna Kendrick) and Branch (Justin Timberlake) and we get introduced to some fun new ones! This sequels was adorable and sent such a great message on differences making the world a better place.  Some of the quotes that have come out the movie were not only fun but inspiring.  So of course, I had to make my list of my favorite Trolls World Tour quotes for you.

Tonight is about family, love and music. –King Trollex

Do you want to hear some real music? –Queen Barb

By the end of my world tour, we are all going to have the same vibe. We are goig to be one nation of Trolls, under ROCK! –Queen Barb

I never knew my heart could be so full. –Guy Diamond

You are crushing it at this Queen thing. –Branch

Being the Queen is the most important thing in the world to me, other than being your friend. –Poppy

We are all Trolls.  Differences don’t matter. –Poppy 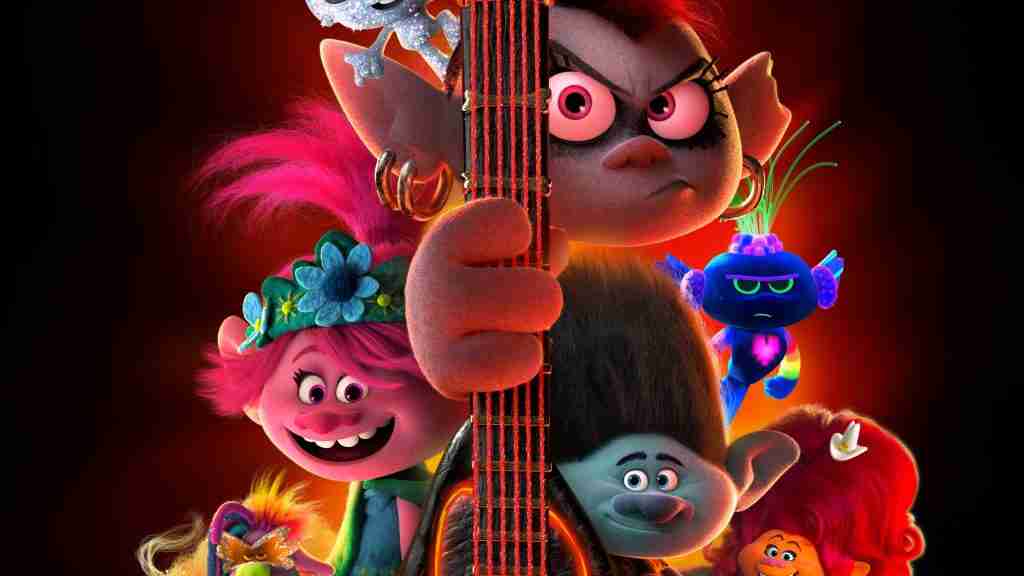 Being Queen means having a lot of power and its my job to use it for good. –Poppy

Who knew world domination could be so much fun? –Barb

Only 4 more strings to go before Rock rules the world. –Barb

I will unite the Trolls under one music, OUR music. –Barb

We are on a mission to help Barb unite all the Trolls. –Poppy

This is going to take a lot of hugs. –Branch

Change of plans, we have to stop Barb from destroying all music. –Poppy

Soon there will be nothing but hard Rock as far as the ear can hear. –Barb

If anyone can find me Queen Poppy and her string, it’s the yodelers. –Barb

Life is sad sometimes, so I kind of like it. –Branch

Oh they must not know music is suppose to make you happy. That is awful. –Poppy

It looks like they got beat up by a rainbow. –Delta Dawn

I want you three to sit in here and think about what you just done. That was a crime against music. –Delta Dawn

I gotta go wash, what you call music, out of my ears. –Delta Dawn

Music should bring us together, not divide us. –Poppy

I knew it. Who let the dogs out. Too far. –Branch

Some Trolls, they don’t just want to have fun. –Poppy

It seems some folks around here don’t appreciate a rad melody when they hear one. –Hickory 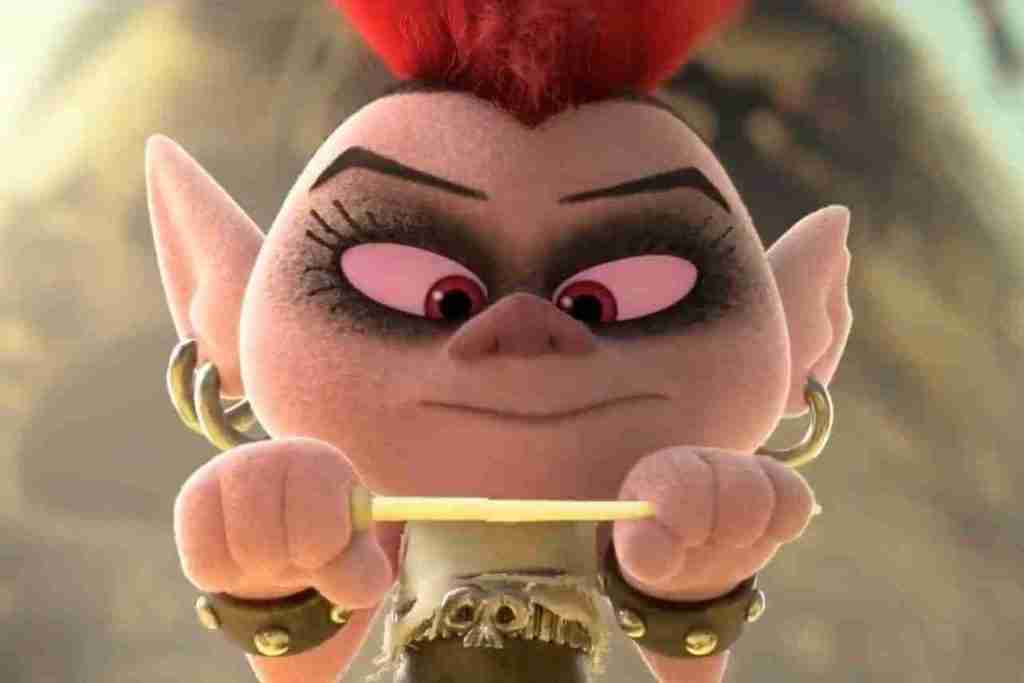 You know what is not safe? Putting too much trust into a complete stranger. –Branch

It is like I’m being paralyzed by a smoothness. –Poppy

Who are you suppose to be Cowboy Pants? –Chaz

You just never had the Chaz experience. –Chaz

How are you suppose to save the world and you can’t even keep us safe? –Biggie

So the Trolls live in isolation because of what Pop did? –Poppy

I can’t go home until I can prove myself as a good Queen. –Poppy

You want to be a good Queen? Good Queens actually listen. –Branch

So, why do I care about you more than anyone else in the world? Weird, right? –Branch

The final words of pop, it will never invade peoples brains again. –Barb

You know who else was fiesty? Pop Village. –Barb

There is all this pressure to be a great Queen. And instead of real friends, you are surrounded by people who just tell you want you want to hear. –Barb

Denying our differences is dying the truth of who we really are. –King Quincy

We are both Queens who just want to unite the world. –Barb

You don’t want to unite the world, you want to destroy it. –Poppy

Now that I have the final string, I can make us all one nation of Trolls under Rock. –Barb

So Popcorn, is being my bestfriend everything you dreamed of? –Barb

You are turning everyone into Rock zombies? –Poppy

I can’t wait to party with you, Poppy. –Barb

History repeats itself, Pop has uined everything. –Barb

It started with the strings, but now it comes from us. –Random Troll

You were brave enough to believe things can change. Braver than me. –King Trollex

I love that we are different. –Poppy

And I love you Queen Poppy. –Branch

In the beginning we were divided, our ancestors thought were were too different to get along. It turns out they were wrong. –Poppy

You have to listen to other voices, even when they don’t agree with you. –Poppy

It’s all these sounds and all these differences that make the world a better place. –Poppy 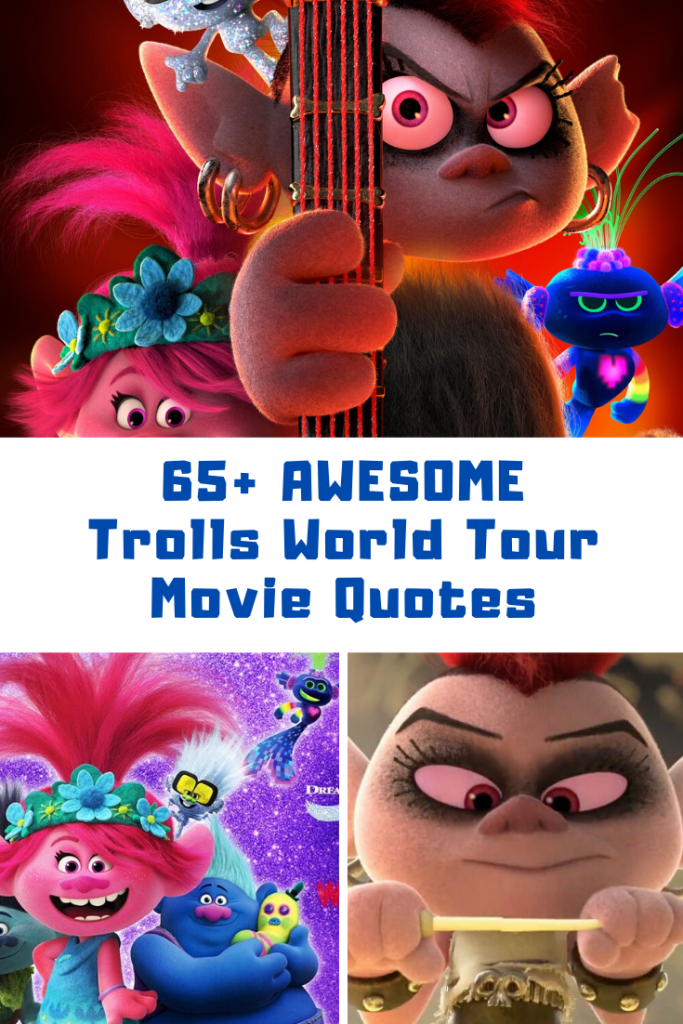