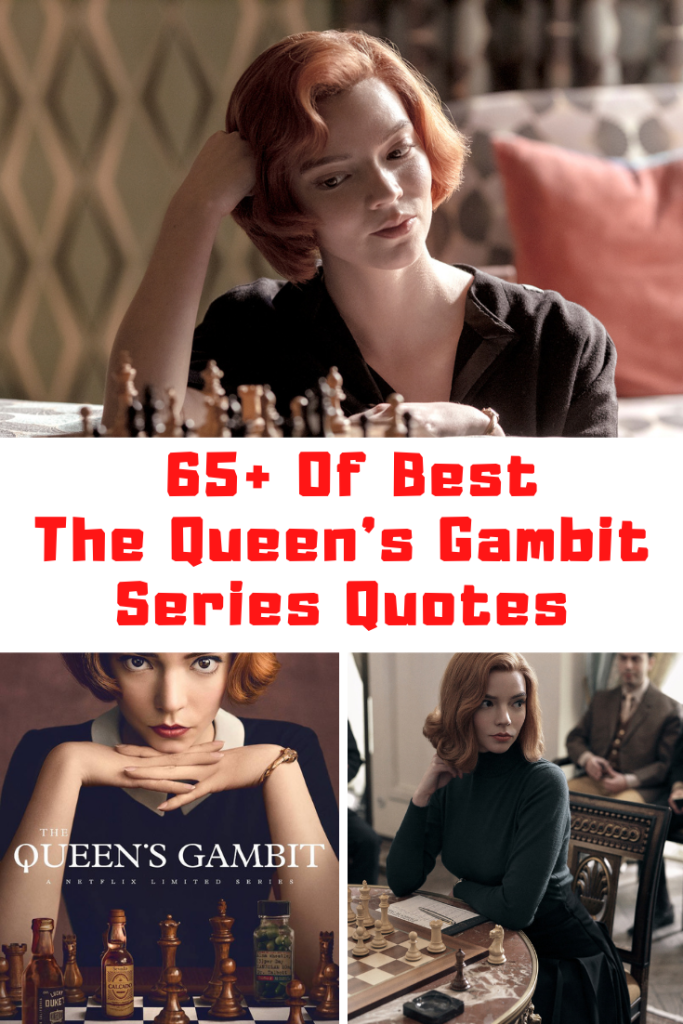 Orphaned by yesterday’s collision on New Circle Road, Elizabeth Harmon surveys a trouble future.  Elizabeth, nine years old, was left without family by the crash. Her mother Alice Harmon was pronounced dead at the scene.

Elizabeth, you are going to find a much different life here. A better one than you might have had.

What’s the last thing they said to you before they died?

I thought I told you to wait and take those vitamins at bedtime?

Most of us are lifers. Been here a long time. Nobody’s gonna come for us now. We’re too old. Or too black.

I don’t play with strangers.

You just be careful you don’t get too use to that feeling.

Girls do not play chess. 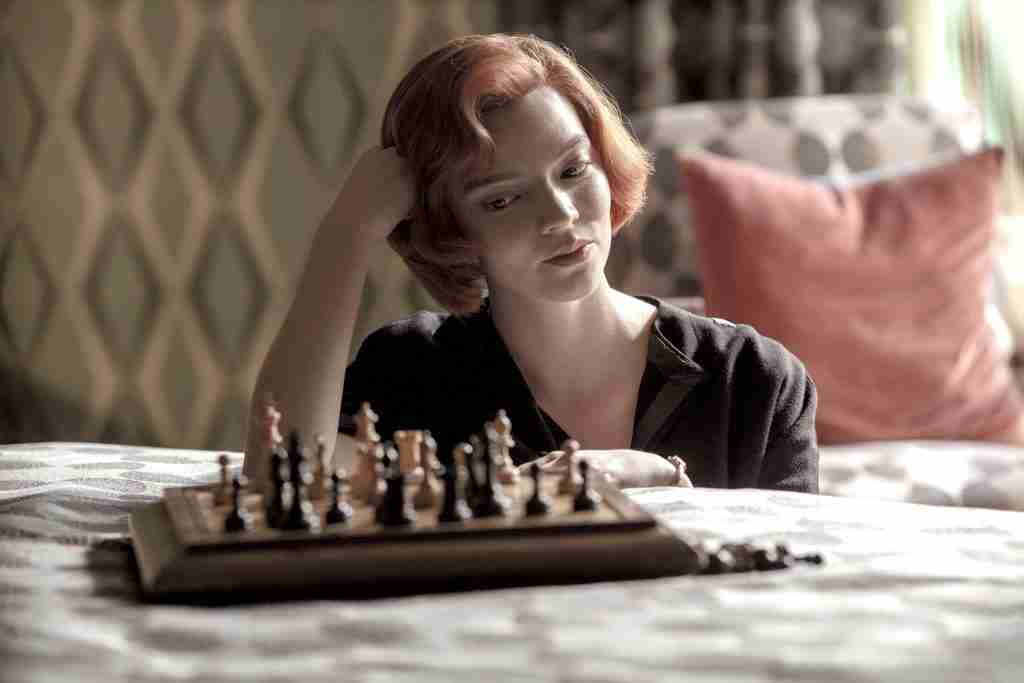 Those things are called openings. The Queens Gambit.

To tell you the truth of it, child, you’re astounding.

What surprised me was how bad they played. They left backward pawns all over the place, and their pieces were wide open for forks.

It felt good. I never won at anything before.

They won’t let me play anymore, I’m being punished. Please, can you help me?

The only girls of your age who work are colored.

You won’t have to suffer much longer.

You go ahead, I’m gonna study the board a little longer.

My tranquility needs to be refurbished.

Come on you ugly piece of trash. You can beat that f*&^er.

Maybe if you would have gotten here on time.

Do you see it now? Or should we finish this on the board?

You destroy everyone you play.

This might be the best Christmas I’ve ever had.

They say you are the real thing.

When I was a girl, I wasn’t allowed to be competitive.

Chess can also be, beautiful.

Creativity and psychosis often go hand in hand. Or, for that matter, genius and madness.

I’ve flirted with alcohol my entire life. If anything, I think it is about time I consummated the relationship.

There is one player that scares me. The Russian. Borgov.

I thought he could see what i was planning. I thought he could hear my heart beating, and know how panicked I was. He still had time to get out of it. But he took the piece just as I planned. I went into that game with a perfect score.

I wanted to win. I wanted to hammer his weaknesses. I wanted to show that f*&^ing pirate that I could beat him, even though I didn’t play the way he thought I should.

You were thinking about winning.

I know what it feels like to lose. And now you do too.

You’ve got so much anger in you. You’ve got to be careful.

For you Beth Harmon, I resign the old fashion way. 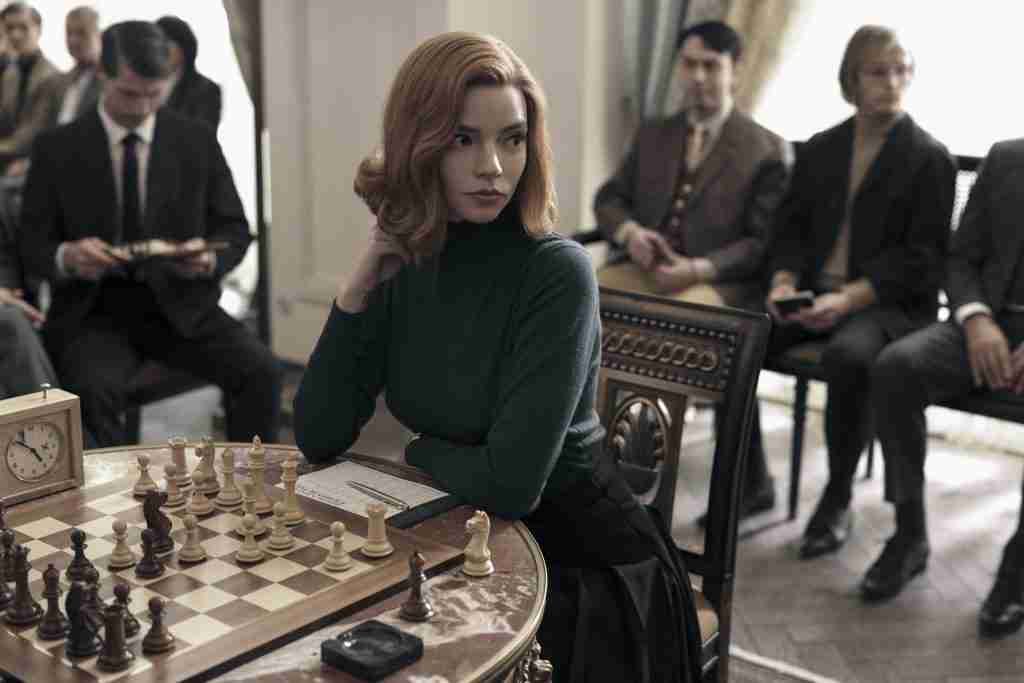 Every move he made was so obvious.

If you are going to play the Soviet’s, you need help.

Anger is a potent spice. A pinch wakes you up, too much dulls your senses.

I think there’s more to life than chess.

It’s foolish to run the risk of going mad for vanity’s sake.

You’re wrong, ya know. You taught me a lot. I’m really glad you called.

You know what they called him? The pride and sorrow of chess.

They help eachother out. Us Americans, we work alone because we’re all sych individualists. We don’t like to let anyone help us.

You could never be a model. You are pretty enough, but you are much too smart. Models are empty creatures. The camera lens fills them with color and texture, and, once in a while, even mystery. But just like there is no mystery to a vacant lot, it’s just there until you put something interesting on top of it.

Well kid, I think you’ve got it.

I would say it is much easier to play chess without the burden of an Adam’s Apple.

You already have so much more than they do. And something none of them have. Talent.

Benny, I don’t know what I’m doing. Or going to.

I always tell people that I was there for two of your big firsts.

You’re no orphan, not anymore.

I know, me a lawyer, but the world is f*&^ed up. And if I’m gonna change it, I can’t spend all my time teaching white girls how to hold a badminton racket. I’m gonna be a radical.

Let’s look at where you’re at, which after being here all of five minutes, looks like it’s at the bottom of a f*&^ing hole. And it’s looking a lot like you dug it yourself. My advice, stop digging.

You’ve been the best at what you do for so long, you don’t even know what it’s like for the rest of us.

I’m here because you need me to be here. That’s what family does.

Excellent. What a brilliant recovery. I resign with relief. 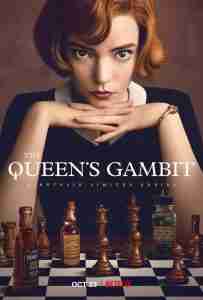 You are a marvel my dear. I may have just played the best chess player of my life.

Tell them that being in Russia has made you feel lucky to be an American.

The one thing we know about Elizabeth Harmon, is that she loves to win.

It’s your game. Take it.

It’s a big deal, beating the Soviets at their own game.