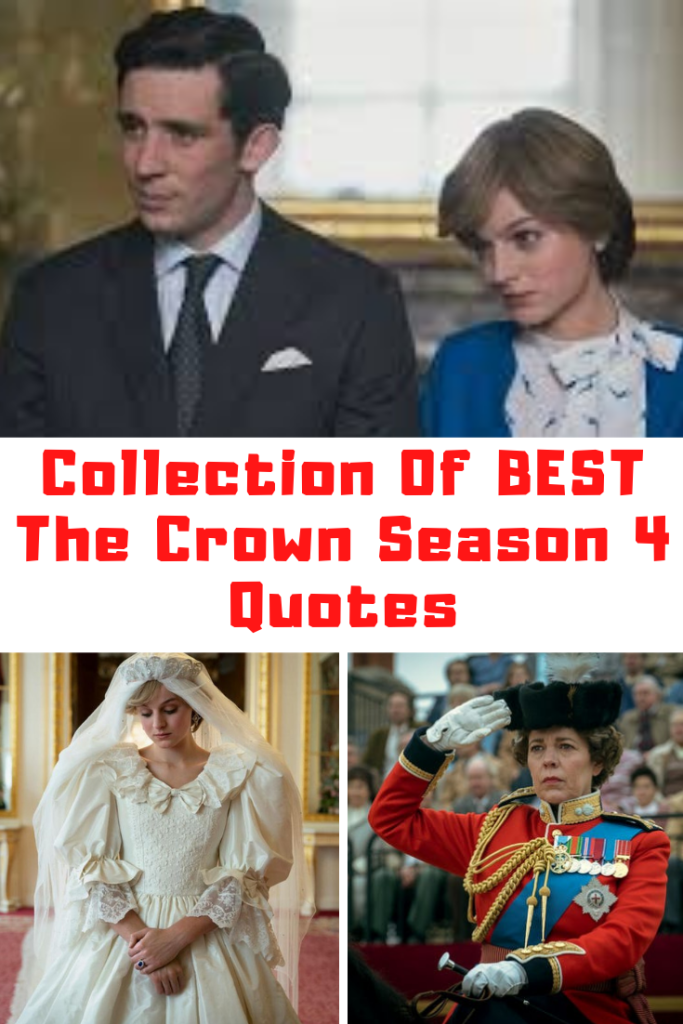 Netflix The Crown season 4 dropped this weekend and I am royally excited! Get it, royally? Ha! I crack myself up. Anyways, I have been waiting for the newest season and beyond excited it is finally here because we finally get to see the relationship between Charles and Diana and let me tell you, man did people have their opinions about this one! You will find a link to funny memes and Twitter reaction down below! I also had to jot down some of my favorite quotes from the season. So check out these shocking The Crown season 4 quotes.

Remind me. What is “like me”? I seem not to just have forgotten how to ride, but who I am.

The idea that you, of all people, should lecture me about the sanctity of marriage, affairs of the heart needing to be conventional, because you and Edwina hardly blazed a trail in that department.

You have a father.

It was how I spent some happy times with my father, King George. He taught me everything.

Work was our play.

The country has been in a state before. It will doubtless be in a state again.

I’m struggling to find any redeeming features in these people at all.

The most important weekend of your life.

Always a mistake to assume just because people are privileged, they lack grit.

It reminds me of my mother’s engagement ring. And it’s the same color of my eyes.

See you at the altar. 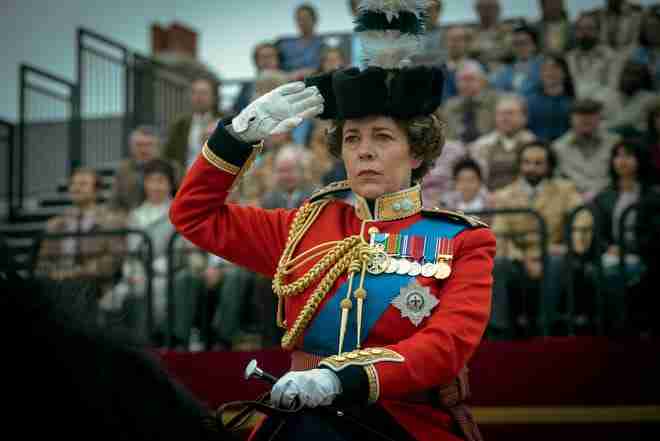 She’s great fun. I just thought if you ever wanted company, She’s the best company.

I get letters from people all over the world, but nothing, not a squeak, from the man I’m suppose to marry.

He’s fussy and set in his ways, he’ll love if you adapt to him.

It is absolutely essential that I see the Queen. This wedding can’t go ahead. It’ll be a disaster for everyone.

I had the bracelet made as a farewell gift. A souvenir. And I went to Gloucestershire for two reasons. To tell Camilla face-to-face that it’s over. Over.

Charles loves someone else. How many times can this family make the same mistake? Forbidding marriages that should be allowed. Forcing others that shouldn’t. Paying the consequences each time.

Is doing nothing your solution to everything?

We never shirk action in h=this family. Ever. We’re no different than anyone else.

Your young beautiful wife, struggling with pregnancy, has locked herself in a room upstairs and is refusingto come out.

You know how I hate interfering. It’s not for me to tell a grown man what to do. But in your position, I might be inclined to worry less aobut my own happiness and pay a little more attention to the well-being of the mother of my future child.

It is our children that are lost, not the Prime Minister’s. Each in their own deserts.

She says I must not blame myself, I am already mother to the nation.

I sat in a chair in the background. Because I didn’t know how to hold him, touch him.

There’s a man, an intruder. He’s by the Queen’s bedroom.

I meet normal people all the time.

They say I have mental health problems. I don’t, I’m just poor.

I shall bear in mind what you’ve said.

Shouldn’t we be careful that this medicine, like some dreadful chemotherapy, doesn’t kill the very patient it is intended to heal?

People do the strangest things when they’re unhappy.

This child is perfect in every single way. So why should you expect me, as his mother, to be without him for one second, let alone two weeks?

Some countries are too important to send out the understudy.

Can’t you pull yourself together?

You’re the Prince of Wales, you were born to go first.

I’m not blind, I can see how unhappy you are. How thin you have become.

I know what being overlooked feels like better than anyone. I’ve spent my whole life being unthanked, unappreciated, uncared for. And if I’ve been cold or distant with you, perhaps it’s because I don’t feel truly understood by you.

You fit in because you are my wife. And because, I love you. 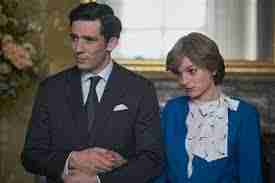 I think this might be the most important conversation we ever had.

I don’t think of myself as royalty. First and foremost, I am a wife and a mother. That’s what’s most important to me.

The perfect wife, the perfect princess, and the whole place goes nuts. It’s the power of fairy tales.

That’s all I want. It’s all any of us want from you. Is it too much to ask?

I’m finally ready to focus on the one thing that has never let me down. Us.

Time. It scares me. It fills me with dread.

Not everything wrong with this family can be explained away by the abdication.

It’s wicked, and it’s cold hearted, and it’s cruel. And it’s entirely in keeping with the ruthlessness I myself have experienced in this family.

Would that be so bad, to free yourself once and for all? To finally find happiness?

Perhaps you will pray for me.

I don’t often get into a battle, but when I do I want to win.

There’s a reason the top job has always eluded you, Geoffrey. The absence of the killer instinct.

I agreed to signals. But as you know, with one simple turn, a signal can soon point in an entirely different direction.

No one would remember the Good Samaritan if he only had good intentions. You see, he had money as well.

She did what she’s spent her life telling me I cannot do. She opened her mouth and expressed an opinion. And is being sluaghtered for it. 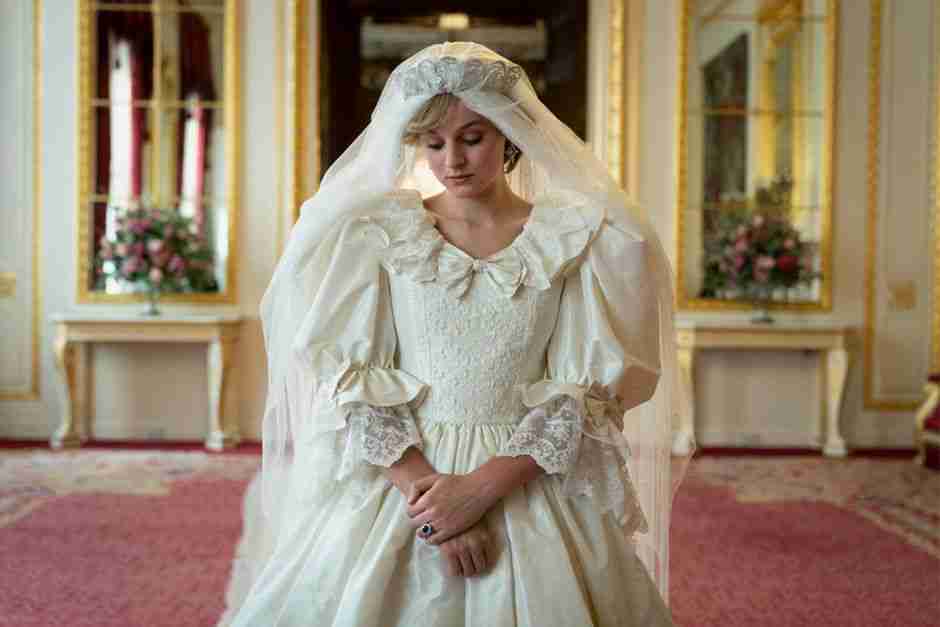 Did you just call me common and old? Because that wouldn’t be a good way to start.

Everything I do seems to horrify you.

If memory serves, you had your own ballerinas for that.

In the moment that avalanche was bearing down on me, in that ghastly moment Where I was sure I was going to die, I had a profound realization. This whole thing, my marriage, this situation, the whole charade is madness. I only want to be with you.

You marriage, all our marriages, are a reflection on the integrity of the Crown.

What else is there to say?

A video of Diana singing some dreadful song in some musical. Phantom of the Opera. Imagine!

No one wants your marriage to end, not a single person. Not Diana, not your children, not your mother or father, not me, not a single one of your friends, and most importantly, not even the woman you think loves you.

What does one have to do to get some kindness from this family?

What we both want and what we can actually do aren’t the same thing.

My love for you is real.

Perhaps the time has come for you to try doing nothing for once.

The difference is you have power in doing nothing. I will have nothing.

I’m in hell. And he just hates me. And wants me to fail.

Someone who looks like me has no place in a fairy tale.

Your capacity for self-delusion never ceases to amaze me.

You barely find it in yourselves to hug your own.

If you have a complaint about not being loved, or appreciated in this marriage. I suggest you take it up with the people who arranged it.

They know that you betray your wife and make no attempts to hide it.

And if one day you expect to be king, then might I suggest you start to behave like one.

Lets just say, I can’t see it ending well for you.

Everyone in this system is a lost, lonely, irrelevant outsider, apart from the one person, the only person, that matters. She is the oxygen we all breathe. The essence of all our duty. Your problem, if I may say is you seem to be confused about who that person is.