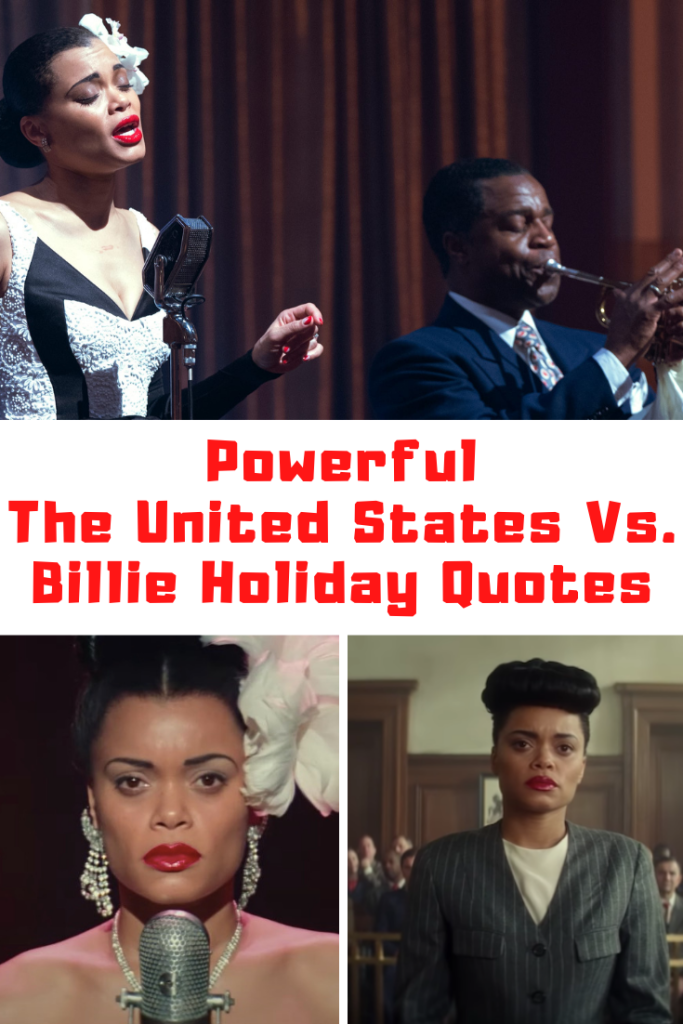 If you enjoyed these The United States vs. Billie Holiday quotes, you may also like these posts: Coming 2 America quotes, Moxie movie quotes, Raya And The Last Dragon quotes, The SpongeBob Movie: Sponge On The Run quotes, Minari movie quotes, The World’s A Little Blurry quotes, Tom & Jerry The Movie quotes.

You ever seen a lynching?

It’s about human rights. The government forgets that sometimes.

The wrong kind of place for the right kind of people.

You’re not fooling anybody walking around in that uniform.

I hear that she is quite the lady.

Any time somebody colored is doing something right they paint us out wrong.

When she started here she was a nobody and now she’s a star.

I want to sing the d*mn song.

This jazz music is the devils work.

It gives a face to the boys being lynched.

I came down here for you to save my a**.

The little pretty muthaf*&^er that be writing all the time.

You better not be one of them gossip folk either.

I don’t like the quiet. It’s so noisy, you know?

Strange Fruit. I got to be pretty high to sing that one. 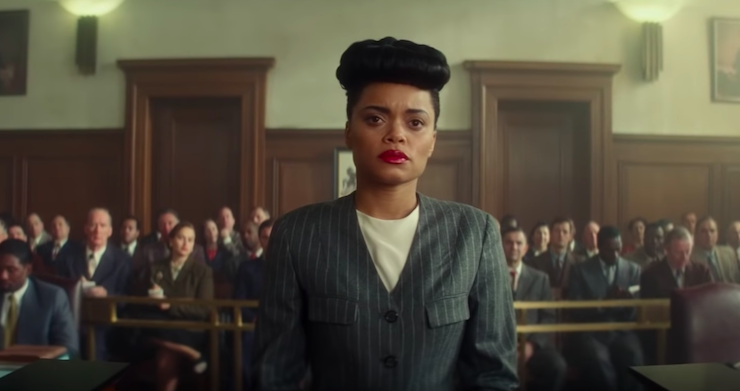 It’s a song about important things. What’s going on in the country. I don’t think people know I care about those things.

Look b*tch, you got one more time to ask one more stupid a** question.

Miss Holiday, only Negro allowed in this elevator’s me.

They killing us for less down south.Lynching men and women. Please don’t cause a fuss here.

You probably don’t like any of my music, do you?

Don’t you want to set an example for your race like Ella Fitzgerald and Marian Anderson?

I need help. Not jail time.

You ain’t Billie Holiday in here.

It’s not just about the drugs, they don’t want her singing that song but if she don’t do it, who will?

She’s singing it for all of us. That young lady is a hero.

My father told me drugs would be the death of our people.

For you being one of those agents, you sure is stupid.

You don’t know how it feels to be missing something in your life that only a fix can fill.

You’ve heard those lyrics. They provoke people, in the wrong way.

Don’t flirt with me. You ain’t my kinda guy.

They just want to hear you sing, Lady.

I’m back. And jail was fun.

Of course I’m high Ed. I wanted to put on a great show.

Only I decide when it’s time to team up that way.

Tonight, it feels good to be back home.

They got us down in the basement trying to take out Negroes. The people I respect, ya know?

Who the hell do you think you’re playing with?

I hear she likes to get to know her lady friends intimately.

How about we ditch these snow bunnies and go get into some black sh*t?

You said we can beat this sh*t Billie, and we can.

They tried framing me, but they got caught red-handed.

Why don’t he go f*&^ with some white people?

Lady, you know a hard head make a soft a**. You ain’t learned your lesson yet.

Y’all know I need my medicine.

You see me driving a car, that sh*t is stolen. I promise you that.

Relax. Let that sh*t kick in.

I never had a chance to play with dolls. I started working when I was six.

It’s a woman’s job to keep her man happy, all right?

be careful with this feeling. This love right here, baby. It won’t love you back. I promise.

Daddy, get Mama down from that tree.

I only know a certain kind of love that makes me feel safe.

See you in church, Soldier Boy.

This drug war is just a war on us.

It’s a war on drugs, not on you Lady.

They don’t want no names. They want to destroy me.

He wants me to stop singing what’s in my soul.

She’s made something of herself and you can’t take it, because she’s strong, beautiful and Black.

I blame nobody but myself.

Your grandkids will be singing Strange Fruit.