In Deadly Illusions, Mary Morrison (Kristin Davis) is an author of a very successful book series but she packed away her typewriter awhile ago to focus on being a mom. However her publishing company wants Mary to write a new book, and is willing to give her an advance of millions. Mary is not ready to get back into the writing game, that is until she finds out her husband Tom (Dermot Mulroney) has squandered all of their money on bad business deals.

Now forced to work on a new book, Mary hires nanny Grace (Greer Grammer) to help her out with the kids and running of her household. Admittedly, Mary becomes a different person when she is working on a new book. But are the strange things going on due to her behavioral change from writing a book or the new nanny?

Lets take a look at what parents need to know before allowing their kids to watch Deadly Illusions.

Language: The film is filled with strong language, profanity use with words including: f*ck, b*tch, c*nt, a**, b**bs and wh*re.

Sexual Content/Nudity: There is sex shown throughout the film, with extra-martial sex included. As far as nudity, a bare male rear is shown, women in their underwear, and topless females shown while having sex. Sexual references are used like “Get me off.” and “Sex starved.”

Violence: Murder is included in this film. One character is murdered with a pair of scissors and that scene is very graphic and bloody. There are other scenes where characters are stabbed/slashed with a knife and are gory and bloody.

Drugs/Alcohol: Characters drinks alcohol and are drugged without their knowledge. Characters are also shown smoking a cigar.

Deadly Illusions certainly intrigues viewers due to its star Kristin Davis, best known as the prudish Charlotte York from Sex In The City. One might expect to see Davis in the next Hallmark special, not playing in such a risque film such as this. And yet, here we are as Davis tries to prove her worthiness in the erotic thriller film genre. At first it seems a bit jolting, as we witness Davis’ naughty side the moment she admits to best friend Elaine (Shanola Hampton from Shameless) her attraction for nanny Grace or when she kicks up her feet and puffs on a cigar. But she seems to naturally ease into the role when she quickly goes from possible seductress to victim…. or so we think.

Where Deadly Illusions falls short is due to a sloppy script with endless plot holes. The film touches on interesting themes, such as Grace’s past or the possible adulterous relationship with her and Tom, yet writers only touch on these topics and choose to focus on the “illusions” in the film. What is real and what is due to Mary’s wild imagination when she works on a book? Boring.

Perhaps all of the subplots are thrown into the film in an effort to spice it up, and while it semi-succeeds in doing so, the film in turn feels disjointed. I see what it was trying to go for; an over-sexed murder mystery, but it is far from Basic Instinct and as much as Kristin Davis tries, she is no Sharon Stone. Deadly Illusions was dead upon on arrival. If you want to watch an erotic thriller, break out your 1990’s movie vault because no one does it better than when Douglas and Stone teams up. This film would feel more at home on Lifetime amongst the endless rabble of forgotten B-movies better suited for a direct-to-video release, that winds up in the bargain bin shortly after release. 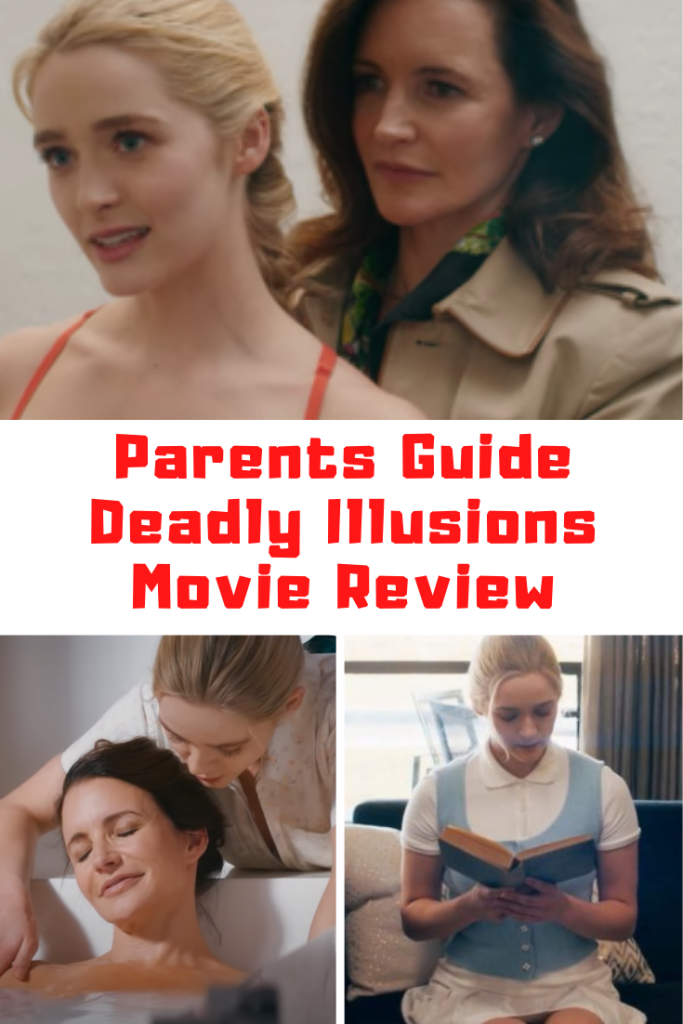