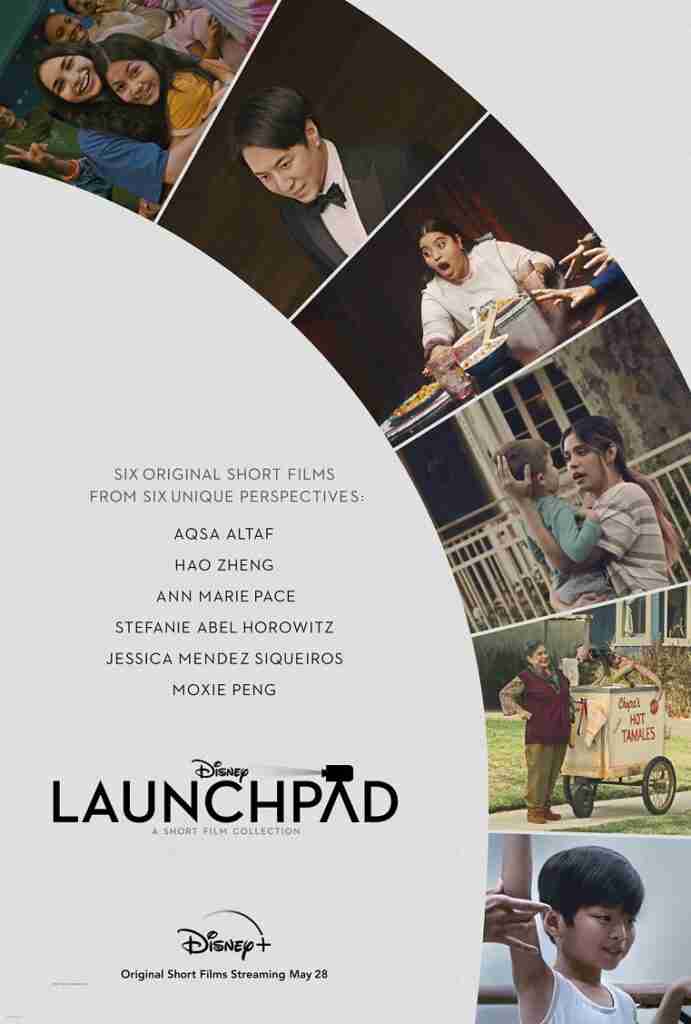 Disney’s LAUNCHPAD season 1 starting streaming on Disney Plus this Friday, May 28th. All six episodes of short stories releases on Disney Plus on May 28th and I had the opportunity to attend an interview with the writers and directors of each short film. Check it out and see what their inspiration was for creating the stories.

Over one thousand filmmakers applied for season one of the Launchpad project, and the six who were selected were each assigned a mentor from the studios. The theme of season one was “Discover” and all six short films are below, along with the creators inspirations behind each.

The second season of Launchpad is now accepting applications, encouraging underrepresented voices to create works under the theme of “Connection.”

Check out all of the season 1 Launchpad shorts and the inspiration behind each, from the writers/directors of the shorts.

Ameena, a Muslim Pakistani immigrant, wakes up on Eid to find out that she has to go to school. Homesick and heartbroken, she goes on a mission to make Eid a public-school holiday, and in the process, reconnects with her older sister, and embraces her new home, while her new home embraces her.

I grew up watching films that did not represent people that look like me, or stories that were like mine, or even people that are around me – none of it was represented on a big screen. I started internalizing that as me thinking that we’re not important enough or valuable enough or cool enough to be on big screen or be worthy enough. That is just such a toxic thing to think as a child and that’s the inherent aspects and inherent result of lack of representation, whether you like it or not kids internalize that. It’s not going to be one story that’s going to be enough to crack that ceiling, but it’s a crack, and one crack will build another crack, will build another crack, and eventually, we will have proper representation of my religion culture on screen. –Aqsa Altaf (Writer/Director)

A Chinese student at an elite U.S. boarding school realizes excellence is not enough when he tries out for a leadership position no international student has ever applied for.

It’s pretty much based on my own experience when I first came to the States. I was 15 back then. I went to a high school in New York, and I just felt like nobody knew me when I first landed. I really wanted to have people see me, so I literally applied for every position I could on campus. I would participate in anything I can. That’s the story that I wanted to also share with Dinner Is Served like how we embrace our own voice, even though it may be awkward, even though maybe nobody will understand. –Hao Zheng (Writer/Director)

Val Garcia, a Mexican-American teen who is half human/half vampire, has had to keep her identity a secret from both worlds. But when her human best friend shows up at her monster-infested school, she has to confront her truth, her identity, and herself.

On that first day of shooting, we all piled around to have our safety meeting. I remember looking around, and I had never seen so much diversity on a set before. It was really profound for me to see. I had a realization that all of us on set together had experienced at one time or another, what it’s like to be an outsider in our own way and to have that and to have those people altogether, making a story that they feel passionate about because they themselves have experienced it is really powerful. I think when you have people tell their own stories, not just the director, but actors and crew members, everyone really telling their own stories, something really beautiful happens and you feel that passion and love and life experience through the screen. –Anne Marie Pace (Writer/Director)

Avalon’s not ready to process the loss of her mother, but when she’s put in charge of a 4-year-old for one night, she finds more comfort than she ever could have expected.

At the time that I was writing it, my zany grandpa was going to be 100, just like Jessica’s grandma. My parents were going to be 70 and my nephew was going to be four. I was just thinking about this passing of the Baton of life that was happening. In my 20s, I was a babysitter and I took care of this really cute four-year-old kid who was so loving and so smart and so incredible and taught me about love. Also, one day, he tried to shoot me dead with his finger gun and I was like, ‘Do you know what that means?’ He didn’t and I said, ‘Well, if I was dead, I wouldn’t be here anymore, and I won’t get to spend time with you and we wouldn’t get to play.’ He was really sad. As we would all be, that’s a sad, sad thing. It just got me thinking about the simple tragedy of our lives is that we’re all going to die, and everyone in our lives is going to die. In that, we’re all going to experience suffering and loss over and over and over again. How do we talk about that in our culture? How do we share that? How do we talk to kids about difficult things? –Stefanie Abel Horowitz (Writer/Director)

THE LAST OF THE CHUPACABRAS

In a world where culture has nearly ceased to exist, one lone Mexican-American struggling to carry on her traditions unknowingly summons a dark and ancient creature to protect her.

The film was inspired by the fact that my great grandma might not have Chapa who is aptly badly characters named after, lived till she was 100 years old. She died five days after her 100th birthday. My family has always been very proudly Mexican American family, and have always been indigenous to the land that we were from in Arizona originally. I realized after she died, after I had 25 years on this earth with her, that I didn’t gather the information that I should have from her. That left me feeling like a bit of a failure to my own culture and really realizing that the responsibility is on us to keep our cultures alive. –Jessica Mendez Siqueiros (Writer/Director)

When Gabriel, a 7-year-old Chinese kid who loves ballet, becomes friends with Rob, another Chinese kid from school, Rob’s dad gets suspicious about Gabriel’s feminine behavior and decides to intervene.

The Little Prince(ss) is very dear to my heart because it was based on my life experience growing up in China as a child. I was five. I was like Gabriel. I was very into feminine stuff and to pink and princesses. I became friends with this kid in our neighborhood who is running around and who’s wild. His dad started to have a suspicion of us and think I’m a bad influence. One day he came over to our dinner table and he told my dad that I was not normal and I need to be fixed. I started to cry and think I let down my family. My dad got very upset and he took my side and really stood up for me and said that he loved me for who I was. –Moxie Peng (Writer/Director)

All six short films will be available to stream on Disney+ beginning May 28!