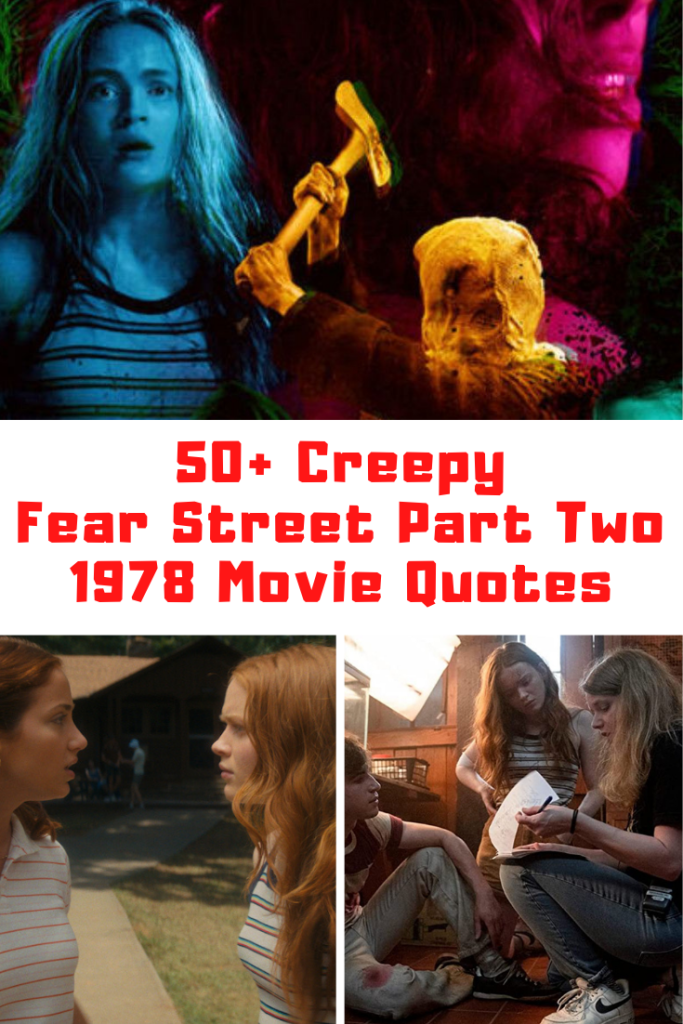 Fear Street Part Two: 1978 dropped on Netflix today, Friday July 9th. The film is the second part of the movie trilogy with the third film dropping on the streaming service next week. I will have a review of the film coming soon, so make sure to stop back by to check it out, it will be linked down below. I also shared a review of the first film below. In the meantime, I wanted to share a list of some of the best quotes from the movie. I love me a good line and this had some truly creepy ones! Check out this list of 50+ best and most creepy Fear Street Part Two: 1978 quotes.

She’s no thief. She’s possessed by the witch.

Despite our differences, we’re all perfect.

You don’t want to corrupt her virgin ears.

That smell better be skunk.

I don’t think you go from a sweet girl with dreams to ripping someone’s insides out with a switchblade.

No one gets out of this town, not even Miss Perfect.

I’m sorry but I can’t save you.

One way or another, you’re gonna die tonight.

Did you see her eyes? There was something in there, something wrong.

Let’s not let tonight be a stain on our legacy.

If we lose, we are still winners in our hearts.

Shadyside there is just something weird, holding us down, cursing us.

A deal was made with the devil.

Sarah Fier cut off her wicked hand on Satan’s stone in exchange for eternal life, scarring the soil beneath with the witch’s mark, bringing darkness upon the land.

Is someone digging a grave?

The curse will last until body and hand reunite.

You remember when you use to have fun? Before you became a snitch?

That’s what happens when you live in Shadyside. Everything turns to sh*t eventually.

If you have to kill him, could you?

They killed so many and you are next.

The cave was alive, Alice.

We all have our ways to deal with Shadyside.

My sister’s in the toilet.

I know I let a lot of people die tonight but, not you. I’m not letting you die.

I’m sorry I wasn’t here, not just tonight, but every day.

Now I know you were right. Everything is cursed.

I won’t let anything pull us apart again.

She spent her whole life looking for this. A way to stop the curse that took her daughter.

We can end this. No more murders, no more curse, no more pain.

We have to bury this thing, right f*cking now.

Tonight I watched your perfect boyfriend turn into a mnster and kill the only person I’ve ever loved.

You bled on the bone. They’re after you. Get ready to run.

My sister was dead and so was I.

And most days, I wish I had stayed dead.

She sacraficed herself for nothing.

It was her. Sarah Fier, the witch. The curse is real.

The witch, the town curse, for one night Cindy believed there was a way to end it. So I thought there was too. But now I know there is no end.

The killers came after us because we found something they didn’t want us to find.

I got you, you witch.