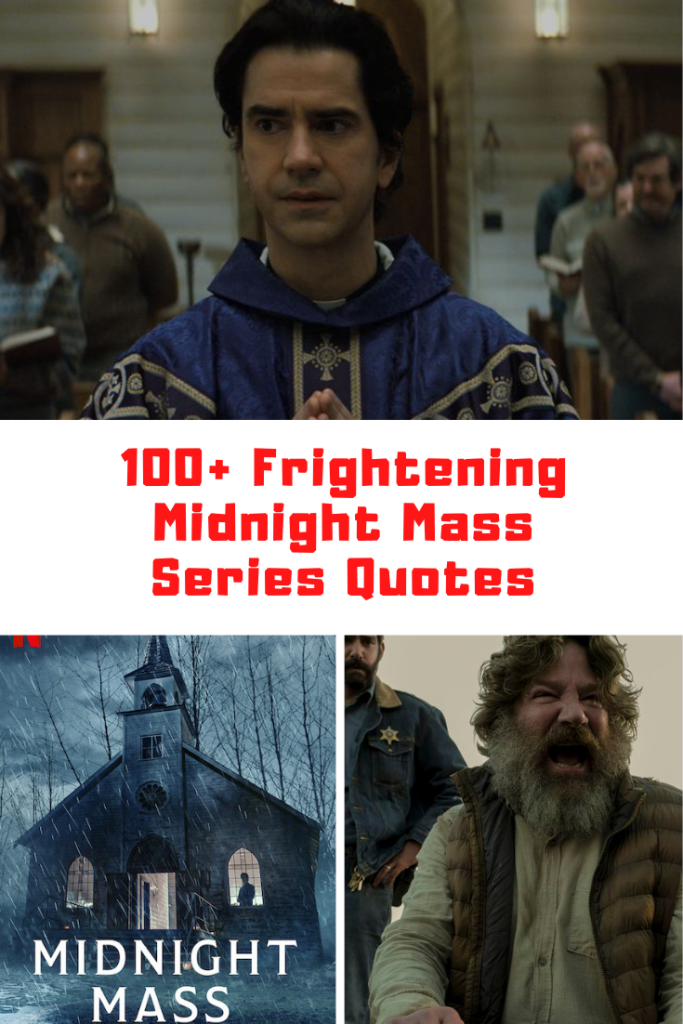 Netflix’s Midnight Mass drops on the streaming service tomorrow, Friday September 24th. I will have a review of the series coming soon, so make sure to stop back by to check it out, it will be linked down below. In the meantime, I wanted to share a list of some of the best quotes from the series. I love me a good line and this had some truly frightening ones. Check out this list of 100+ best and most frightening Netflix’s Midnight Mass quotes.

While you’re at it, ask him why he always takes the kids while the drunk f*cks walk away with scratches.

He can’t help who his dad is, we had a deal.

Everything from the Uppards washes up on the west bank and I gotta clean it up, moron.

I learned early there’s no point trying to stop you drinking.

Can’t be what you pictures when you took this job, dealing with me all the time.

I thought the environmentalists were on our side. These limits, these retention limits going on about population decline, and suddenly, there’s a limit. But not for the oil company, for us. For the boats.

The people on this island, we use to be hundred. Now we are just dozens.

Unless you plan on hopping a ferry to the mosque, you’ll have to hunker down with us too.

People have been seeing him wander around at night, like late at night.

We’re practically steering him around the altar half the time.

You gonna sit here at this table, wafter what you have done, and say ‘Oh, church isn’t for me’?

You can consider it a condition of your parole.

That will upset your mother, you not taking the sacrament, but it wouldn’t be respectful if you did.

Welcome to the Pot, what’s left of it anyways.

You’re the prodigal one, I’m just the Black Sheep.

Most guys find Jesus in prison.

I just exist now. I have absolutely no purpose at all.

I’m sorry for what you’ve been through. I’m really, really sorry.

Lots of gossips in our parish.

It is funny, because at home she never met a bottle she couldn’t empty.

In prison no one needs to ask. Every day is exactly the same.

It’s great to see so many of you here today. But I do have to ask, why not every Sunday?

Jesus sees you. Sees you best of all and he sees you true.

He sees you Brother’s and Sister’s and he will resurrect this island and he will again fill your nets.

That’s what it means to have faith. That in the darkness, in the worst of it, in the absence of light and hope, we sing.

This is my favorite time of year. Renewal. Resurrection.

Everything has its season.

If you try to search my pockets, all you will find is a fist up your a**.

Suffering can be a gift.

There is nothing in the scripture or the world for that matter that suggests, God negates personal accountability.

Bless me father for I’m going to sin.

I’m going to tell them this lie for their benefit, so that when it starts, they’ll be ready. For what’s to come. For the miracles that are to come.

Feels wrong, doesn’t it? To interrogate a miracle?

God does not seek glory.

I didn’t feel it at all. And it was when I realized just how much I couldn’t feel, that’s when I got really scared.

You stole from me things I didn’t even have yet. 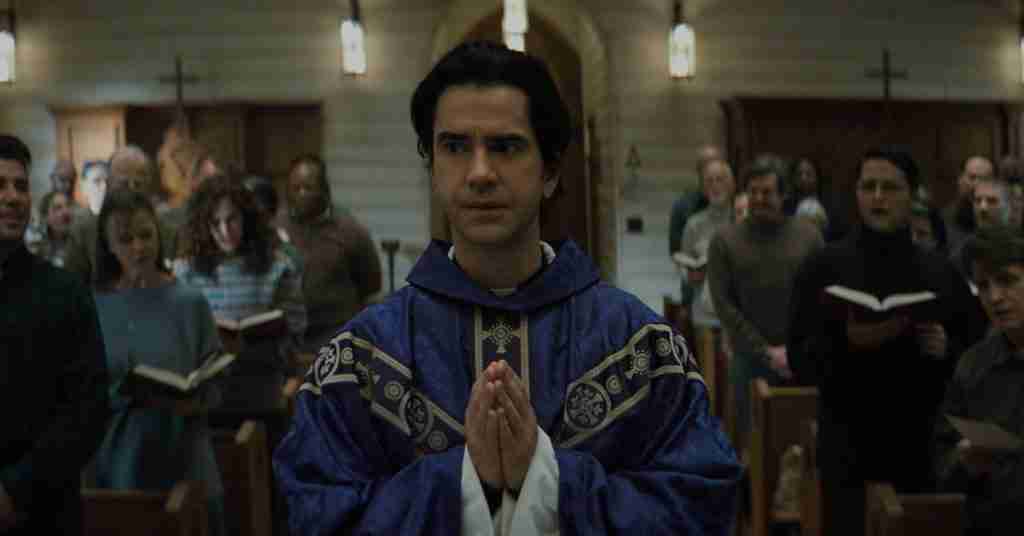 I came here today… I forgive you.

I don’t know where I’ve been, somewhere dark. And it’s like I just woke up and there you are, my beautiful.

I guess I’m not as quick to forgive as they are.

You showed up, Joe. You’re here and that is enough.

It just felt too easy to leave, like I shouldn’t be able to just leave.

At least we are becoming different people.

That’s not how God works.

Drained from his body was all the fear, pain. It was just drained.

There is nothing in your uterus.

Always starving after a long trip, and you had quite the journey.

Something is happening, shifting inside of me.

I already have resentment in my heart and I shouldn’t have.

Everyone gets theirs wings clipped at some point.

I’m not getting off this island. I know it.

With God all things are possible.

Maybe it is a dream but if it is, we are all having it.

Well at least they didn’t call him bong.

When something like this happens, we are all suppose to be the same.

They say that about people who killed themselves. That they seemed fine.

God does not want you to fight for this country. The arrogance of that. God has no country. There is one God for the world.

That is not my church, that is not the man that I knew.

I was terrified of death and that is what actually brought my to God.

God still has a plan, and death isn’t part of it anymore. Not for all of us.

We don’t have to be afraid ever again.

Knowing I should feel guilt, but accepting that I did not, finding grace where the guilt should be, I wrestled with that.

Did you feed? When that angel was ripping into my neck and my blood was pouring out onto the floor. Did you join in?

The fourth angel poured his bowl upon the sun and it was allowed to scorch men with fire.

Do you feel at peace?

The wonders that you’ll experience out there, you’ll see things you never saw before. Colors, lights. You’ll hear things, smell things. The world, it burns brighter.

I worry about that one. He’s hardly the reliable sort.

Welcome to God’s army. We are going to do great things.

I want you to take this boat and row it to the mainland and leaves this place and never look back.

That’s the thing about science. It deals in what is observable. Testable. Repeatable.

For the wages of sin is death. But the gift of God is eternal life in Jesus Christ, Our Lord. Free will.

So I don’t intimidate. I don’t overshare or overstep or intrude in any way. I don’t even carry a gun. And still Beverly Keane and few others too, look at me like I’m Osama bin-f*cking-Laden.

This will be frightening for all of us, but, Sturge, my brother in Christ, are you afraid?

Lo and behold, an angel of the Lord appeared to them. And they were afraid.

I wouldn’t make you choose what you are about to choose without first showing you God’s messenger.

Just then an angel of the Lord stood before them. And the glory of God shone around them and they were sore afraid. And the angel said, Fear not, fear not, be not afraid.

He will be okay, he will heal. That is part of God’s miracle.

Brothers and sister rejoice. The first of the Apostles awakes.

I love him, I truly do but look, it happened nonetheless as it was meant to.

You know what they say, ‘Man plans, God laughs.’

How else does the gospel spread?

Did it hurt you?

This isn’t the way. This is never the way.

It isn’t about us anymore. It’s about everyone else in the world. Dying for people we never met. No greater love than that.

The children will be fine. They are already saved.

God doesn’t love you more than anyone else. You aren’t a hero. And you certainly aren’t a victim. 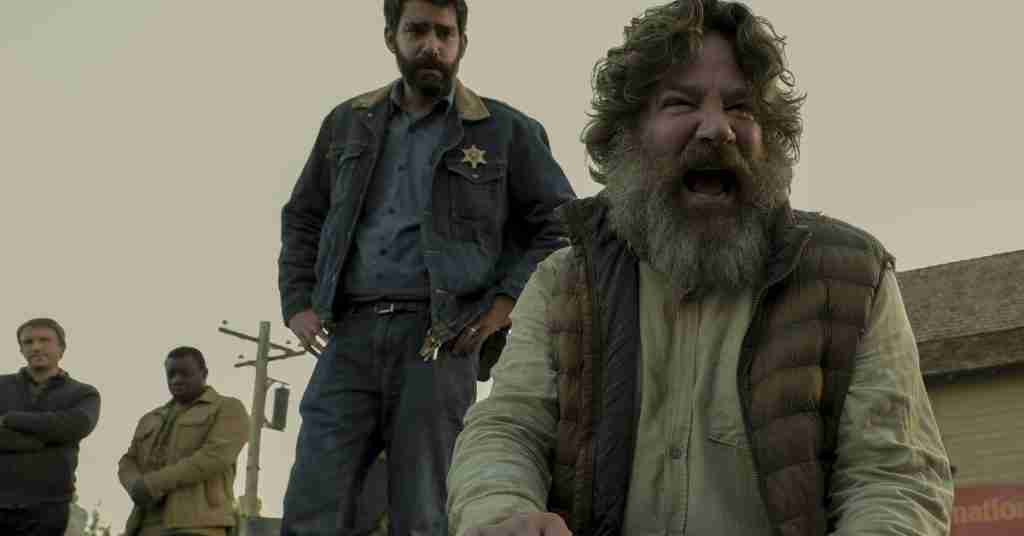 I suppose virtue isn’t a virtue is it doesn’t cost you anything.

You were always going to be the last, the hardest, test of my faith. You.

I’m sorry that we never told you, your mother and I but I love you so much.

He makes the sun rise on the evil and the good.

I think I killed my mom.

I remember every atom in my body was forged in a star.

I remember I am energy. Not memory.

More galaxies in the universe than grains of sand on the beach. And that’s what we’re talking about when we say God. The one. The cosmos and its infinite dream.

I can’t feel my legs.