Hotel Transylvania: Transformania drops on Amazon Prime Video this coming Friday, January 14th. Last month, I attended the press junket for the film, which included some of the franchise fans’ favorite cast members! Attendees were given the opportunity to ask questions and find out some interesting behind-the-scenes info, including how they filmed this sequel without Adam Sandler. Check out what the cast had to say about Hotel Transylvania: Transformania without Adam Sandler and more fun tidbits.

The full press conference interview with the cast of Hotel Transylvania: Transformania is linked down below. It was a joy to share in the laughs and get the behind-the-scenes stories, including how the rest of the cast felt without Adam Sandler.

One thing is missing from the new film Hotel Transylvania: Transformania and that is the Adam Sandler, who is best known in the franchise as the voice of Dracula. Adam Sandler is such a big part of the franchise, and truly is one of the reasons these films are as successful as they are. It goes without saying that his absence from the sequel is surely felt. During the press conference, some hinted that Sandler was unable to sign on to this sequel because of it scheduling conflicts. While fans will definitely miss Adam, Brian Hull who replaces the voice as Dracula does a fantastic job filling in the very big shoes left by Sandler. As Fran Drescher says, it is probably because he is not imitating Sandler, but rather he is imitating Dracula.

It’s lucky that Adam didn’t sound like Adam. In our camp Dracula is an imitatable voice. I don’t really think that the fans are gonna even notice, quite frankly. When the movie was being developed at its early stages, and the first couple, Adam played a really important part in its development and producing and everything and making it as quality as it is — working with writers from SNL and all of that. But the voice itself is the voice of Dracula. – Fran Drescher 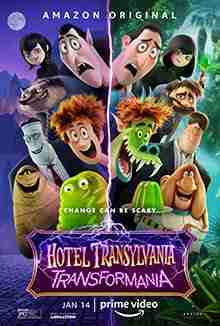 Drac and the Pack are back, like you’ve never seen them before in Hotel Transylvania: Transformania. Reunite with your favorite monsters for an all-new adventure that presents Drac (Brian Hull) with his most terrifying task yet. When Van Helsing’s (Jim Gaffigan) mysterious invention, the ‘Monsterification Ray,’ goes haywire, Drac and his monster pals are all transformed into humans, and Johnny (Andy Samberg) becomes a monster!