AppleTV+ Cha Cha Real Smooth is an honest and heartfelt story with a smart storyline and perfect casting. Check out the details in my parents guide movie review. 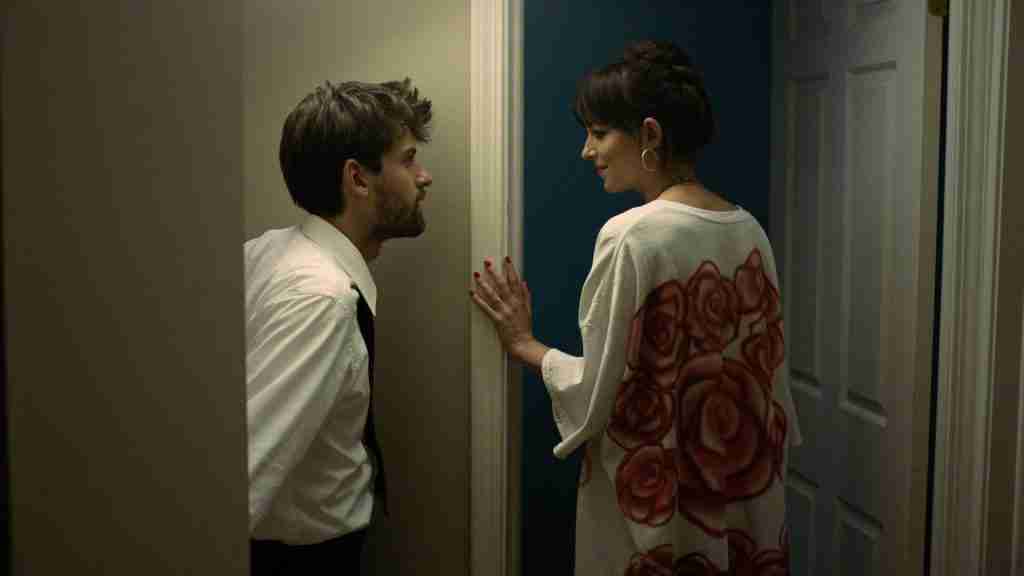 Cha Cha Real Smooth drops on the AppleTV+ streaming service tomorrow, Friday, June 17th. The film first premiered at the Sundance Film Festival earlier this year to much acclaim and was quickly picked up by AppleTV. It stars Dakota Johnson and Cooper Raiff in this sweet and heartfelt story that is sure to be a hit with audiences. Check out the details in my parents guide movie review.

Fresh out of college — but now what? Higher education failed to provide 22-year-old Andrew with a clear life path going forward, so he’s stuck back at home with his family in New Jersey. But if college did teach him one thing, it’s drinking and partying — skills that make him the perfect candidate for a job party-starting at the bar and bat mitzvahs of his younger brother’s classmates. When Andrew befriends a local mom, Domino, and her daughter, Lola, he finally discovers a future he wants, even if it might not be his own.

Let’s take a look at what parents need to know before letting their kids watch Cha Cha Real Smooth.

Mature Content: The film contains adult themes of a sexual nature and shows characters engaging in sexual activities. There is also a scene in which a female character starts her period and has blood everywhere. There are also some scenes that involve the bullying of an autistic girl, which may be triggering for some viewers. Characters are shown consuming and getting drunk on alcoholic beverages.

Cooper Raiff follows up his winning debut feature, Shithouse, with Cha Cha Real Smooth which he not only stars in but also also writes, directs, and produces this charmer of a film. This coming-of-age story respects its characters’ struggles even in moments when its protagonist can’t see beyond himself. The film tackles hard issues such as depression, self-medication, and even feelings of connection and developing feelings with multiple people. In some ways, the story is very complex, and in others, it delivers a simple and honest tale of emotional maturity.

Cha Cha Real Smooth stars Dakota Johnson, and may very well be her best work to date. She delivers a complex and raw performance as Domino, a woman who had a child early in life and feels like she missed out on so much due to it. The chemistry between Johnson and Raiff is electric and transforms to a deeper level when he bonds with her autistic daughter. While the relationship seems wrong between the two, it is as if fate keeps bringing them together and, in turn, has viewers rooting for them.

Cha Cha Real Smooth will be relatable for many, especially those in their early 20’s who are on the path of discovering who they are, what they want, and who they want to be. It is a warm, heartfelt story that is fresh, funny, and honest. The film’s ability to cover so much emotional ground in such a short amount of time is astonishing, and it will resonate with people of all ages. Raiff will definitely be on my radar in the future.