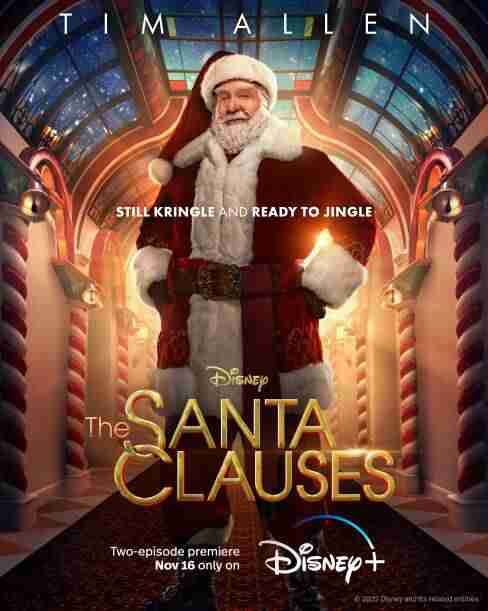 At the D23 Expo 2022 last weekend, Disney revealed the first look of the Disney+ Original series, The Santa Clauses. The two-part series stars Tim Allen, Elizabeth Mitchell, Elizabeth Allen-Dick, Devin Bright, Austin Kane, Matilda Lawler, Rupali Redd, and Kal Penn and is set to be released on the streaming service on November 16th. During the D23 Expo, Tim Allen appeared on stage to discuss why he returned to The Santa Clause franchise. He wanted some lingering questions answered. Check out what they were!

In The Santa Clauses: Scott Calvin is on the brink of his 65th birthday and realizing that he can’t be Santa forever. He’s suddenly starting to lose his Santa magic; and, more importantly, he’s got a family who could benefit from a life in the normal world, especially his two kids who have grown up at the North Pole. With a lot of elves, children and family to please, Scott sets out to find a suitable replacement Santa while preparing his family for a new adventure in a life south of the pole.

At the D23 Expo 2022 last weekend, Tim Allen appeared on stage to explain why he wanted to join the film. “It’s all about the script and they answered the question I’ve always wondered: How come the elves weren’t worried when I showed up at the North Pole with the Santa suit on? What happened to the guy that slid off the roof?” Allen went on to joke about how that would scare the heck out of kids, and how it scared him when he made the first The Santa Clause film 28 years ago, or as he put it, “700 years ago.”

The Santa Claus is back and Tim Allen explains why he agreed to return. #thesantaclaus #D23Expo #D23ExpoLive #D23Expo22 #d23expo2022 pic.twitter.com/Y1z7wRvURk